Left-wing provocateurs in New Orleans have been spoiling for a fight all week, ever since masked men hired by Mayor Mitch Landrieu began tearing down Civil War era Confederate monuments. Members of the far-left group Antifa were engaging in acts of provocation prior to outbreak of violence by burning Confederate flags, slashing tires, spraying mace and throwing bottles. Sandra Gerhold, who attended Monday’s vigil told me, “two supporters standing at Beauregard were threatened with a gun.”

Will Antifa will be convicted of “gang activity” and “terroristic threats” for waiving the anarcho-communist flag? Remember white Confederate history buffs  Kayla Rae Norton and Jose Ismael Torres were sentenced to up to 20 years in prison in Douglasville, Georgia earlier this year after they’d allegedly issued a similar threat to black people while in a truck convoy displaying Confederate flags.

As per my earlier article on my website: (VDARE.com has added some links and citations)

Left-wing rioters from Antifa drove to New Orleans in an armored assault vehicle, maced a woman in a wheelchair and defaced several Confederate statues. In exchange Confederate supporters landed punches and knocked an Antifa across the head with a flag pole. All of this happened Monday evening on May Day, a date significant to left-wing groups and which coincided with other uprisings around the country.[ Riots mar May Day in Portland and Olympia. In Seattle? Light up the ‘peace joint’, Seattle Times,  May 2, 2017 at]

Most of the violent activity occurred while police waited on the sidelines, according to sources who likened the situation to that in other liberal cities like Berkeley. Police were purportedly told to stand down while scenes of mass violence erupted between right and left-wing demonstrators.  With masked men, police snipers, armed Confederates with assault rifles and military convoys bussing in truckloads of ‘anti-fascist’ demonstrators it might seem like a New American Civil War is starting in New Orleans over the legacy of the last one.

New Orleans Mayor Mitch Landrieu ordered the removal of four Confederate era monuments back in 2015. [Landrieu calls for removal of monuments to confederacy  by Sabrina Wilson, Fox8Live, June 24,2015] Early last Monday morning (April 24th), under cover of night, masked construction workers broke in half and carted away the first of the three statues: The Liberty Place Monument. [ Removal of the first of four New Orleans Confederate monuments begins with Liberty Place, By Beau Evans, NOLA.com May 2, 2017]The area around the statue was fenced off, guarded by an NOPD police squad and protected by overhead snipers. After they were done even the names inscribed at the base of the statue to commemorate the dead had been chiseled away, leaving only a blemished stump of concrete. 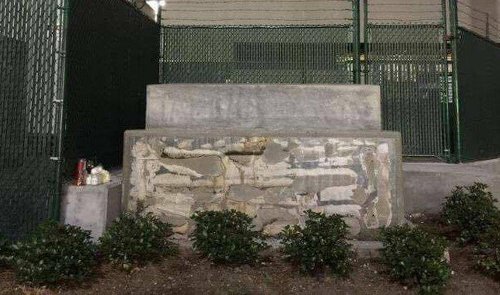 All that remains of Liberty Place Monument 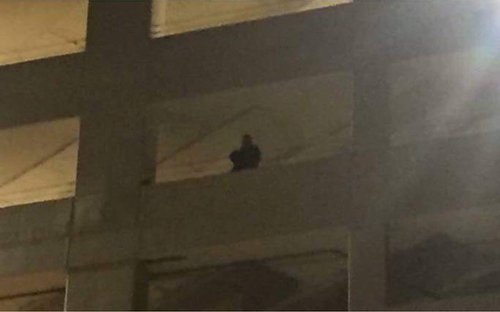 Since then a small but vigilant contingent of monument supporters from around the country have been guarding the Jefferson Davis statue day and night, presumably because it would be the easiest to remove. The primary impediment to moving the Davis monument is simply that it is bolted in place while the Robert E Lee statue is up high on a pedestal surrounded by street car lines and the P.G.T. Beauregard monument is extremely heavy.

Monday evening, as about a dozen monument supporters were on guard, an assault vehicle (which some have identified as a deuce and a half) full of so-called Antifa, or anti-fascist demonstrators showed up looking for a fight. A banner on the side of their vehicle read, “F— off Nazi scum!” and they were waving the red and black flags of anarcho-communism.

Several protestors confronted the Confederate group with taunts like, “F___ you, Nazi!” and “Your monument is coming down!” Several bottles and other small implements were thrown at the demonstrators including Andrew Duncomb, a black Confederate supporter. 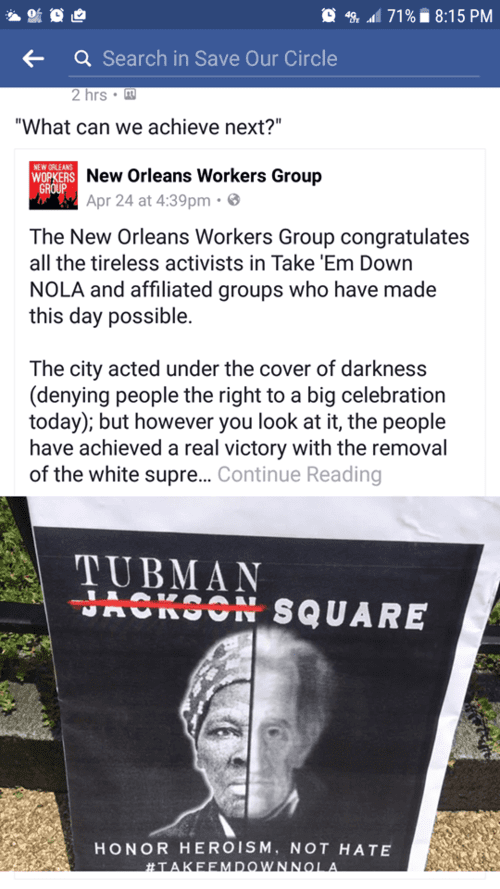 Several sources confirm that another black Confederate supporter, Arlene Barnum was harassed by several Antifa until she was brought to tears. Despite being purportedly anti-racist activists, Antifa called Barnum a “coon”, “Aunt Jemima” and “house negro”. When she returned to her car later that evening one of her tires had been slashed.

As the night dragged on the violence escalated. Eileen Marcinkowski, a woman whose pelvis was crushed in a May 4th car accident and is bound to a wheelchair, was maced by an Antifa. “This woman comes across the road screaming and spraying mace. There was no provocation and she didn’t seem to be trying to spray anyone in particular. I felt an extreme burning that I never felt before in my life. My lips today are still tingling and swollen.” Eileen went on to explain that one protestor also threw a broken glass bottle that bounced off the side of her wheelchair. 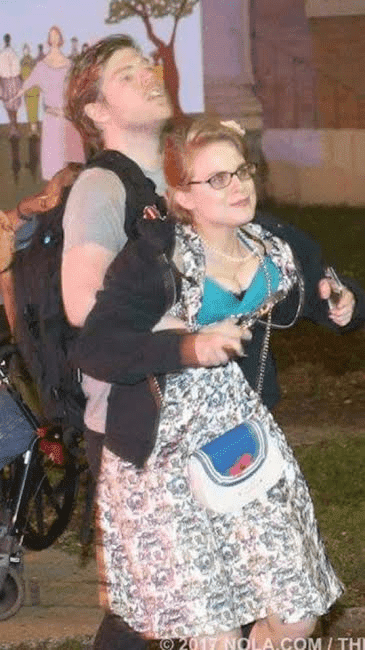 Eileen claims this woman maced her

One of the Confederate supporters knocked a protestor over the head with a flagpole. But it wasn’t until both sides began exchanging punches in full view of the media that the New Orleans Police Department stepped in. 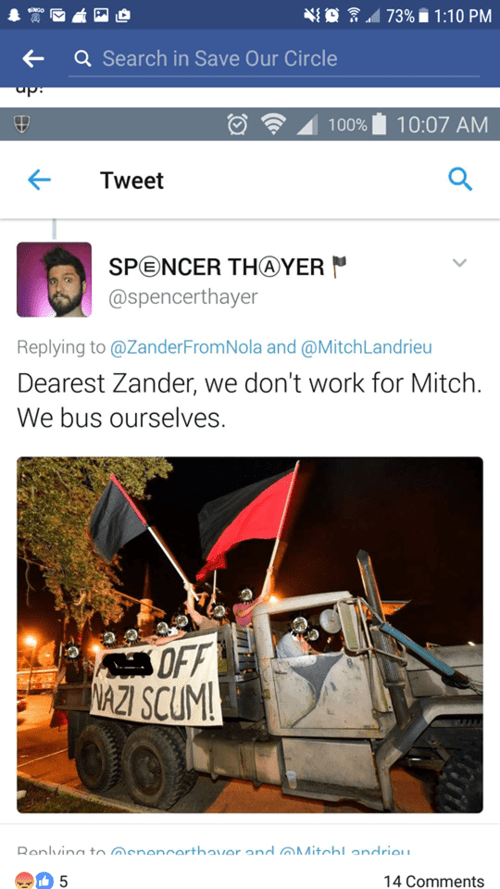 Several Communist groups have already taken credit for the melee including the local New Orleans Workers Group and Take ‘Em Down Nola (which share founding members) as well as a Chicago group called Chicago Rising (aka Occupy Chicago). One leader of Chicago Rising, Spencer Thayer, responded to accusations that his group was bussed in by Mayor Mitch Landrieu, “We don’t work for Mitch. We bussed ourselves.”

Later that evening two more Confederate monuments were vandalized. One dedicated to General P.G.T. Beauregard had buckets of red and pink paint splashed across it. It was also fitted with a red cap and several crudely strewn banners which said, “This is historical violence, we say no.”  [EXCLUSIVE VIDEO: Vandals deface Beauregard monument, FOX8Live, May 2nd 2017]

A statue to Robert E Lee was hit with graffiti saying, “White supremacy is a lie” and that the “memory (of the Confederacy) never dies”.

Five arrests were made Monday evening, for charges ranging from disturbing the peace to crossing a police cordon and public intoxication. Two of those arrests were from the Confederate supporters.  None of the arrests were due to vandalism or the assault on the wheel chair victim, Eileen Marcinkowski. [Five people arrested during Jefferson Davis monument protests, NOPD saysAdvocate May 2, 2017] 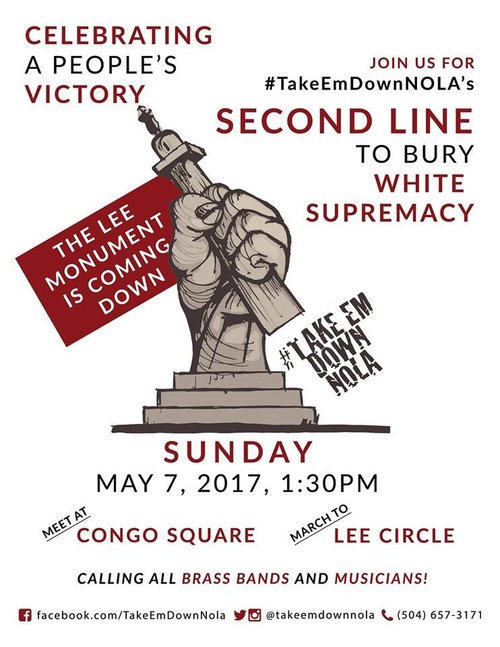 The Facebook page for Take ‘Em Down Nola is calling for a march to Lee Circle on Sunday afternoon complete with a brass band. The event claims, “The monument is coming down” although there is no indication whether or not that will specifically happen on Sunday.

Supporters of the statues are hoping to stall until Louisiana’s conservative House of Representatives can pass a Heritage Protection Act (HB-71) which they are scheduled to vote on Wednesday, May 3rd. Louisiana Governor John Bel Edwards is a Democrat and it’s uncertain whether he would sign or veto the bill if it was to reach his desk.

The most ardent heritage supporters have vowed to stay until the end, whatever it may be. When asked what his message for the rest of the country would be Andrew Duncomb, who has been guarding the statues for over a week said, “If you don’t think that the Confederate monuments should stay up that isn’t the point anymore. It’s that the Mayor Landrieau is willing to allow this terrorist group Antifa to act out while the police stand down and allow World War 3.”

Monument supporters were given a sliver of hope on Wednesday, May 3rd when a committee of the conservative New Orleans House of Representatives sent HB-71 to the full House, where it will probably pass .

It's a historical preservation bill that would prohibit the removal of historical statues like the ones being torn down in New Orleans. [La. lawmakers back bill to keep Confederate monuments in place, The Associated Press, May 3, 2017]In order to be enacted into the law the bill has to be passed by the State Senate and then signed into law by Democrat Governor John Bel Edwards.

New Orleans was the largest Southern city during the American Civil War and a site of several major conflicts after the war between Southerners and Northern Reconstruction (a monument to one of these battles, The Liberty Place Monument, was the first to be torn down).

The three remaining statues are:

Bill McHann, leader of the Save Our Circle historical group doesn’t believe in allowing the historical monuments to go down without a fight, “When they took down the first monument I thought about engaging in civil disobedience. I wanted to hop the fence and do something. But there weren’t many of us then and there were SWAT teams and snipers all around.”

After Monday night’s debacle McHann hopes that activist will start to arrive from all over the country, “Our strategy is to get enough people in front of the monuments to block removal, if it comes to that.”

Jason Kessler is a journalist and president of the nonprofit Unity and Security for America. Follow Twitter and Gab: @TheMadDimension.