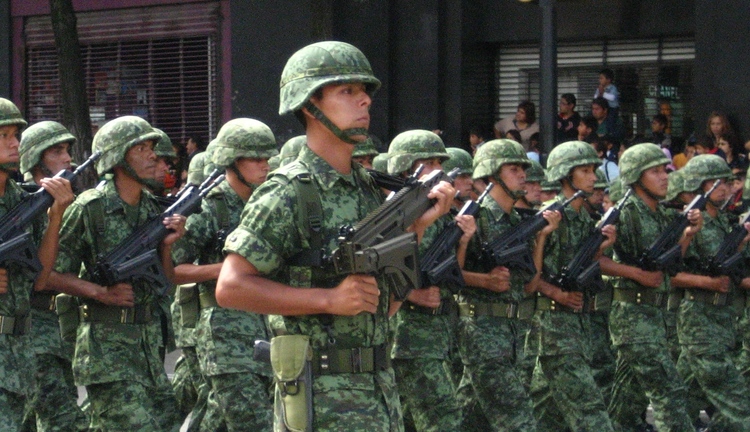 If it's war you want, forget Afghanistan and the "Axis of Evil" invented by the president's speechwriters and take a look at our dear amigo to the south, Mexico.

Last year, according to documented reports of the U.S. Border Patrol, Mexican troops and police officers crossed into United States territory at least 23 times. Since the Bush administration seems to be silent about and indifferent to these invasions, Rep. Tom Tancredo, by far the most courageous critic of mass immigration now in public life, has demanded an explanation from the Mexican government.

Don't bet your tamales he'll get a serious one.

The explanation Mr. Tancredo does get from Mexico is that the incursions were in pursuit of drug smugglers. "The troops are fighting against drugs," a Mexican government official told the Washington Times last week, "and sometimes they get lost in those areas—there is no clear marking for the border." [Mexican soldiers in border crossings Washington Times May 13, 2002]

Well, maybe sometimes they do. I guess you can't count on Mexican troops and police officers knowing where they are or being able to use maps, compasses and radios to find out.

But maybe sometimes they're not "fighting drugs" but smuggling them. That's what Mr. Tancredo, who visited the border region in April, found out.

Mexicans covering for drug smugglers is not necessarily the issue, however. For several years now, Mexican troops seem to have waltzed into U.S. territory pretty much whenever and wherever they felt like it.

Some of these incursions may indeed be accidents or the results of enforcement operations in uncertain territories. Then again, the fact is that Mexico really doesn't much care whether it's U.S. territory or not, since a great many Mexicans think the area belongs to them anyway. Given the vast immigration of Mexicans into the region, some day it will.

In 1997, the predecessor of current Mexican President Vicente Fox, Ernesto Zedillo, told Mexican nationals in Chicago, "I have proudly affirmed that the Mexican nation extends beyond the territory enclosed by its borders and that Mexican migrants are an important—a very important—part of this." [RealAudio Sound Clip]

Just so. By encouraging the massive migration of its unwanted nationals into our country, Mexico constructs a population base that can eventually simply swallow the regions it lost in the Mexican-American War. Mr. Tancredo says Mexican officials told him Mexico views the Southwest United States and northern Mexico not "as two countries, but as 'one region.'"

Meanwhile, Mexican cops and troops can act as though the border doesn't really exist by crossing it whenever they feel like it and doing whatever they please, including firing on American government agents.

"These situations can be very difficult," a Border Patrol officer told the Times. "We are outgunned in these instances. They have automatic rifles, and we have handguns." Mexican military support for illegal drug smuggling, he said, is "a definite possibility." Aside from their profound patriotic attachment to the nation's lost territories, Mexican cops and soldiers are not exactly famous for their honesty.

The border incidents with Mexico are by no means new—I wrote columns about some of them as long as two years ago—but apparently neither the Clinton nor the Bush administration has done much about them. Mr. Tancredo has, at least to the extent that a congressman by himself can.

What should be done, now that the Border Patrol itself has confirmed that armed Mexican police and soldiers seem unable to stay out of a country that isn't theirs and where they have no business, is to deploy the U.S. Army to round up the illegal aliens and drug smugglers on our side of the border and to keep the Mexican army and police on theirs.

Almost certainly, the ulterior purpose of the military and police crossings is to habituate the U.S. government and its officials—not to mention American citizens—into thinking that areas that belong to the United States are really Mexican.

If so, a few shots from U.S. troops in the other direction might inform the Mexican military who it is who is really outgunned—and remind them of whose country they made the mistake of invading.