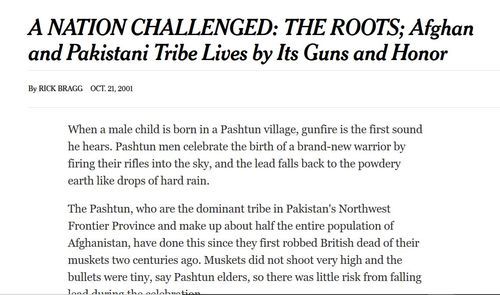 Afghans And The American Racial Dilemma

The mass murders of 9/11 plunged America into the volatile vagaries of Afghan politics. We currently find ourselves perplexed by trying to assemble a post-Taliban government in a land where every extended family has been at one time or another the sworn enemy of practically every other family. Americans, who probably rely less upon their extended families than anyone else on Earth, run into severe conceptual problems in trying to understand Afghans, who rank clan honor over the kind of civic, corporate, ideological, class and national loyalties that Americans comprehend.

Yet understanding how Afghans think – and, for that matter, how most other human beings think – will give us some insight, not only into our most pressing diplomatic problem, but also into our most persistent domestic problem: race.

Winston Churchill fought in a punitive expedition on the Afghan border in 1897. In his enormously entertaining memoirs My Early Life he offers a description of the Pathan-speaking tribes, from whom the Taliban regime is drawn, that's one of my all-time favorite pieces of prose. (Recently, the People Who Are in Charge of These Things have changed the transliteration from "Pathan" to "Pashtun" in their frenzied attempt to use words, not to communicate, but to expose the rest of us as being shockingly less trendy than they are.)

Except at harvest time, when self-preservation enjoins a temporary truce, the Pathan tribes are always engaged in private or public war. Every man is a warrior, a politician, and a theologian. Every large house is a real feudal fortress made, it is true, only of sunbaked clay, but with battlements, turrets, loopholes, flanking towers, drawbridges, etc., complete. Every village has its defense. Every family cultivates its vendetta; every clan, its feud. The numerous tribes and combination of tribes all have their accounts to settle with one another. Nothing is ever forgotten and very few debts are left unpaid… The life of the Pathan is thus full of interest…

Into this happy world the nineteenth century brought two new facts; the breech-loading rifle and the British Government. The first was an enormous luxury and blessing; the second, an unmitigated nuisance. The convenience of the breech-loading, and still more of the magazine, rifle was nowhere more appreciated than in the Indian highlands. A weapon which could kill with accuracy at fifteen hundred yards opened a whole new vista of delights to every family or clan which could acquire it. One could actually remain in one's own house and fire at one's neighbor nearly a mile away.

John Huston's hilarious and heartbreaking movie The Man Who Would Be King, based on a Rudyard Kipling short story set in a region of Afghanistan now called Nuristan, offers a similar perspective. In 1997 Jonny Bealby retraced the fictional steps of Kipling's rogues Daniel Dravot and Peachy Carnehan and found nothing had changed.

"On the four week journey, I'd heard of twelve murders and enough tales of thieving and brigandage to fill a small book," Bealby recounted. "When I asked Ismael, our Nuristani translator, why this should be, he simply shrugged, 'It is our culture,' he said." 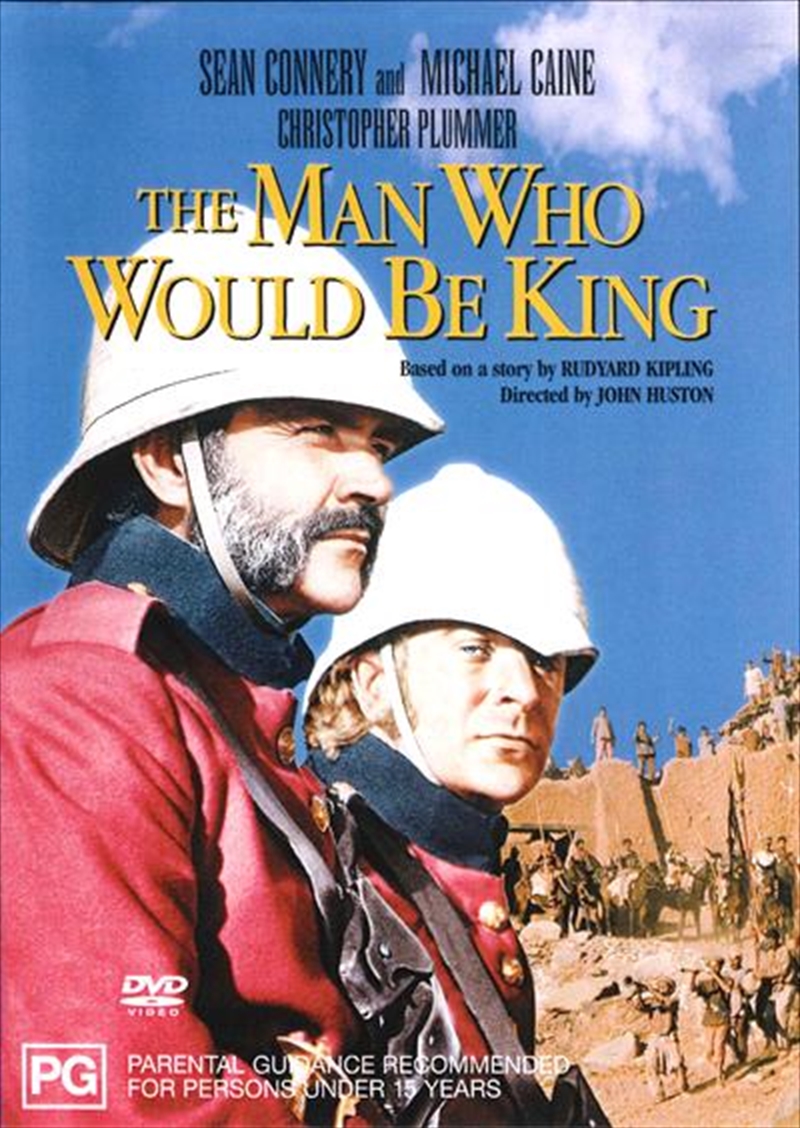 Rick Bragg's amusing account in the NY Times on 10/21 found a world with which Churchill and Kipling would have been familiar:

When a male child is born in a Pashtun village, gunfire is the first sound he hears. Pashtun men celebrate the birth of a brand-new warrior by firing their rifles into the sky, and the lead falls back to the powdery earth like drops of hard rain… Muskets did not shoot very high and the bullets were tiny, say Pashtun elders, so there was little risk from falling lead during the celebration. Then, generations later, Pashtun took Kalashnikov rifles from Soviet soldiers they killed in the war that led to an ignominious Soviet retreat in 1989. "But the Kalashnikov bullet was so big and heavy that, when we fired it in celebration, it dropped back down back out of the sky, and killed us." … That does not mean the shooting stopped. Tradition, the elder said, holds firm here. Even the police, who frown on the power of tradition, are ignored. "A law, a government, is not so much a factor here," Mr. Taizi said. …

This is a tribe that anthropologists consider one of the oldest on earth, bound by a common language, but also by millenniums of marriage, and by blood. As Islamic militants use religion as a rallying cry all around the Muslim world, here on the border it is ethnicity as much as Islam that ties Pakistanis to their Afghan cousins — even those in the Taliban. A proud, almost arrogant people who fought Alexander the Great, they have fought among themselves for centuries, as families do…

"You people in America say that human life is sacred," said Mr. Khattak. "Here, life is nothing without honor." Outsiders have, over the centuries, sometimes developed a lower opinion. … A British officer once advised his superiors not to waste bullets on the Pashtun. Buy them, he said.

The article concludes on an optimistic note, though, by offering a way to bring peace:

There is, in Pashtun law, an alternative to war. If one village or clan wrongs another by killing one of its members, the village of the killer can offer to the wronged village a girl, to be taken as a wife by one of the villagers. But the woman, Mr. Taizi said, is mistreated all her life. She is never regarded as an equal. "She is persecuted," he said. It is tradition.

Perhaps Susan Sontag or Hillary Clinton might be persuaded to volunteer.

Afghanistan's division into warring families is tragic-comically extreme, probably due to the severity of the terrain. But it's important to realize that the Pathans are much closer to the default form of human society than we are. Outside of North America and Northwest Europe in the last few centuries, most people have instinctively viewed the world as consisting of concentric circles of blood relations radiating out from themselves to include their clan, tribe, ethnic group, and/or nation. The names for the various levels are nturally vague, as are the levels themselves. They are all just versions of extended families, ranging from small but close to large but highly diffuse.

Upper-middle class Americans, when not watching The Sopranos, generally just don't get the importance of extended families in the rest of the world. American intellectuals are especially oblivious, for emotional reasons – they tend to despise their relatives, who often aren't as smart as they are, but frequently make more money.

That many Americans don't have to rely much upon their relatives is one of the great triumphs of American civilization. It didn't come easily. It requires a stable government that possesses a near-monopoly on violence, yet treats citizens honestly and as equals before the law. The government must obey the rule of law itself. It must enforce property rights and private contracts. Beyond that, the citizenry must be commercially adept enough to create a competitive economy that makes nepotism highly expensive. Americans must – as Francis Fukuyama has pointed out – trust each other enough to form large, meritocratic companies. We can even make outsiders into Americans – as long as their numbers are limited, we choose them carefully, and we rigorously impose our language, values, and patriotism upon them. (Whether we have been doing that for the last 30 years is a whole 'nother question.)

But the problem Americans have never been able to solve is race. We probably won't ever be able to fix it. We could certainly, however, handle it better if we managed to understand what race is.

Most people from primitive cultures have a sophisticated, bottom-up understanding of race. Race to them is just family writ large.

For the average human throughout history, as for the average Afghan today, his own village has been full of his close relatives. Other villages nearby would be populated by his more distant relations. His village has its differences with them, and may go to war now and then. But if the people across the river attack, then all the villages on this side of the river will forget their feuds until they jointly drive the enemy away.

Yet even the people on the other side of the river are remotely related. So if the outsiders from over the mountain range invade, then all the river villages will unite. And so on and on in ever larger concentric rings of family and race.

America, however, was populated from across the seas. So this natural pattern of extended family blending imperceptibly into racial group is less obvious here. And American thinking about race has been particularly crude because we are distracted by the striking contrast between blacks and whites. This has led to the American dogma that only people from different continents belong to different "races." Within the white or black race you are supposed to find only "ethnic groups," who are alleged to differ only culturally, whether Greek or Icelander, Pygmy or Dinka. 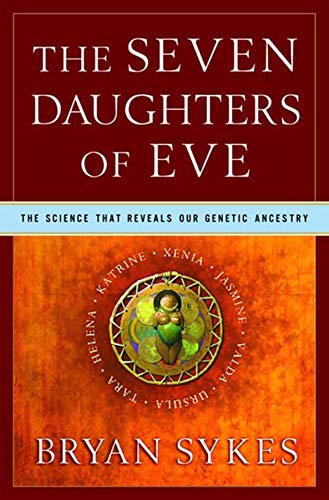 Not surprisingly, since our concept of race is so unsophisticated, we are prone to fads and fantasies like the now-dominant "race does not exist" line of cant.

I am about to review The Seven Daughters Of Eve, a fascinating new book by Oxford geneticist Bryan Sykes about European DNA patterns. I've been a little stumped by how to approach it, however, since Sykes almost understands what he's talking about, but is still hogtied by his failure to grasp the big picture: that a racial group is an extremely extended family that is inbred to some degree.

So I write this as a preface to explain why the study of population genetics touches on the great issues of the day. In my next article on Sykes' book, I'm going to explain what he fails to: why racial loyalties, disastrous as they've often been, are rooted, not in particular genes, but in the very fact of our having any genes at all that are passed on by sexual reproduction.

Race, it turns out, is as fundamental to life as sex.