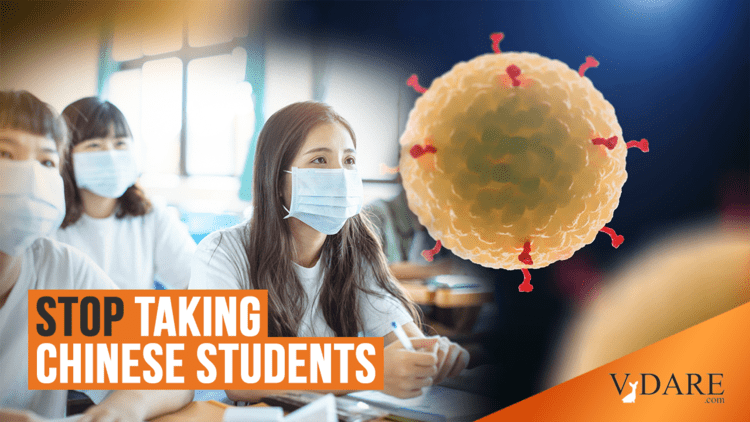 After Pandemic, Security Scandals: Time To Rethink Student Visas—Even If Higher Ed Blob Is Addicted To Them

Earlier, by James Fulford: The “China Virus” Came From China And Chinese People. AND IT'S OK TO SAY SO

More than 130,000 Americans have died with or from the Chinese Virus, and another 2.73 million have been infected. Yet little if discussion is heard about the reason it got here so quickly: China. Whether the pathogen oozed out of the repulsive wet markets of Wuhan, or originated in a poorly managed lab at the Wuhan Institute of Virology, a key doorway into the U.S. was through our bloated higher education sector and awful visa programs like the F-1 for students and J-1 for “exchange visitors,” another word for spies. To stop another pandemic, these programs should ne ended, if not for public health then for national security.

College students went back home to China over winter break, contracted the virus, and came back to their respective colleges with a disease the U.S. was ill-prepared to combat. Case in point: my home state of Massachusetts, one of the worst-impacted states. Suffolk County, which includes Boston, had a 2.5 percent coronavirus infection rate as of today, [Infection2020.com, June 30, 2020]. Contrast that with New York City, considered to have had the worst outbreak nationwide, with a 2.6 percent rate.

Although a Biogen conference that took place in Boston in late February was thought to be a super spreader of the virus, that isn’t where it originated. The first confirmed case: a UMass Boston student who traveled to Wuhan, China for winter break [UMass Boston student first confirmed case of coronavirus in Massachusetts, by Joe Dwinell, Boston Herald, February, 1, 2020].

Wuhan isn’t exactly a tourist destination for white, black, and Latino Americans. I can't say I've ever met someone who cares about the Yellow Crane Tower or Hubei Provincial Museum. As usual, little information about the Bay State’s Patient Zero is public other than his age and status as a student, but it’s an almost certain bet that he’s a Chinese student. So one must ask: What was he doing here in the first place?

Nor was this the only such case. By late January, Inside Higher Ed reported, the virus had already spread to Arizona State University and was thought to be on a few other campuses [Preparing for Coronavirus, by Elizabeth Redden, January 27, 2020].

Some college spring breaks begin as early as February. As Reuters reported, international travel brought multiple coronavirus cases to Vanderbilt University because the school did not prohibit Chinese students from traveling home during spring break [Exclusive: How elite U.S. college students brought COVID-19 home from campus, by Anna Irrera, April 2, 2020]. Thus one freshman mentioned in the Reuters report, Sophia Yan, contracted the virus when she traveled back home to China.

Of course, some cases might have originated in other countries. But the fact is, if fewer Chinese nationals were on college campuses here, the number of Covid-19 cases would be fewer, and so would the number of deaths. That’s not to blame these individuals for these deaths but instead the failure of U.S. government policy.

And that failure isn’t just a public health menace. It threatens national security as well.

Because China is arguably our country’s greatest geopolitical adversary, importing Chinese students should be a major red flag, so to speak.

China has been planting spies among university faculty and in research departments. That happened in Massachusetts. Two Chinese nationals in the country on fraudulent visas and Charles Lieber, a Jewish American who chaired Harvard's Chemistry and Chemical Biology Department, were charged for lying about their ties to the Chinese government. They were part of a plot to steal American research and technology on the ChiComs’ behalf [Harvard professor among three charged with lying about Chinese government ties, by Veronica Stracqualursi, CNN, January 28, 2020].

NBC News reported on a few other examples earlier this year:

Last month, the Trump administration wisely decided to expel 3,000 Chinese graduate school students from American universities because they had ties to Chinese military schools. Of course, the colleges themselves weren’t happy because foreign students pay full tuition and add to diversity, which delusional liberal colleges love. The Chinese government can find ways around that expulsion as long as the program exists.

Even students and exchange visitors who aren’t spies should worry us.

What good does it do our country to educate future generations of the Chinese Communist Party? Xi Jinping’s daughter, Xi Mingze, studied at Harvard University under a fake name. So did Bo Guagua, whose father Bo Xilai was once the Communist Party Secretary for the city of Chongqing [The East Is Crimson, by William J. Dobson, Slate, May 23, 2012]. With the help of neoliberal shills in our government, China has gutted the heartland of this country of its manufacturing jobs and showers us with opioids [Evolution of the U.S. Overdose Crisis, Rand Corporation, September 6, 2018].  They could figure out ways to hurt us more in the future.

Not to mention these programs displace American workers. In some cases, a nonresident’s alien F or J visa exempts him and his employer from payroll taxes. That allows businesses to save 7.79 percent by hiring them instead of American workers [Payroll Tax Benefits for Employers, SeasonalStaff.org]. This is commonly done on Cape Cod in Massachusetts with the J-1 summer work travel program, as I reported last year. And when students graduate, they sometimes stay on H-1B visas.

Those visas, by the way, also present a health and national security threat for the same reasons as F and J visas.

Solution: Shut them all down and keep the Chinese out, not just for our health, but for our national security.

Hank Johnson [Email him] is a student of New England politics and popular culture.