America: It’s Murder, Not Suicide—And We Need Your Help To Stop It!

VDARE.com is currently in the middle of our Year End Appeal, with a goal of bringing in $200,000 in donations. Please donate here to keep America American.

A vast and terrible immigration crisis is upon us today, and it is being covered up by Big Tech and the Woke Left. The crisis is so huge that the Corporate media cannot ignore it, so they try to minimize the issue. 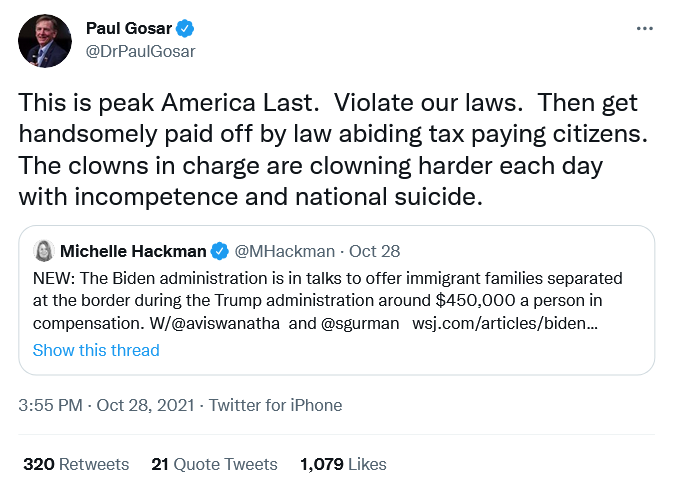 But is it? As VDARE.COM constantly documents, if a “national suicide” is taking place, it is a forcibly assisted suicide—a murder—by political Dr. Kevorkians who expect to benefit from the death.

The Biden administration’s team at DHS is laser-focused on expediting the flow of migrants into the U.S. and downplaying the significant vulnerability this creates for terrorists, narcotics smugglers, human traffickers, and even hostile nations to gain access to our homeland.

He added: “In my professional assessment, the U.S. Border Patrol is rapidly losing the situational awareness required to know who and what is entering our Homeland. [Border Patrol Chief Forced Out By Biden Issues Dire Warning About Who Is Sneaking Into America, by Ryan Saavedra, Daily Wire, September 21, 2021].

The news that America’s sovereign borders—our national immune systems—are compromised spread through the Third World like a COVID variant.

The new waves of aliens crashing on the southern border originate in South America, the Islamic world, Nigeria, Haiti, and parts of Asia. These aliens openly claim that our American homeland, our beautiful country, is everybody’s country. They even literally march under a new flag that looks like Old Glory, but with the Stars hacked out of the blue field, reportedly because the mutilated American flag means that “America is for everybody.”

Migrants tell us the American flag with no stars means “America is for everyone” — they say the flag symbolizes freedom and liberty. The signs on the ground read, “we come in peace” “No blood” and “Joe Biden is for all” #BorderCrisis pic.twitter.com/nDFMVl0O0S

But our flag is only one symbol that represents everything these communists hate.

Shared history is a vital element in a true national identity. Destroying the evidence of our shared history from plinths and monuments all over the country, from Teddy Roosevelt to George Washington to the Confederate Battle Flag, is aimed at abolishing America itself.

But that’s just one tactic.

Thus in September of this year about 15,000 Haitians gathered under a bridge on the Texas/Mexico border. These were not refugees from an earthquake or even Haitian poverty. They had left Haiti years ago and settled in South America but decided the grass looked greener in the USA. Coordinating by cell phone across the continent, these hordes converged on Del Rio and demanded entry to the USA. Their voluntary camp was horribly crowded and filthy. The situation was so bad that even the Corporate media covered it.

Then the Haitians were gone.

The camp was suddenly empty, power washed by people in hazmat suits.

As VDARE.com reported, the Biden administration had moved them out on charter flights to various undisclosed places in America. The flights of illegal Haitians happened in the dark of night, so Americans wouldn’t see it happen. And it was all paid for by American tax dollars.

And that’s just one example. Raw numbers don’t convey the size of the problem.

At one million, nine hundred fifty thousand, five hundred nineteen “encounters” by the Border Patrol in Fiscal Year 2021, the volume of people illegally crossing the border is hard to grasp.

VDARE.com has developed these comparisons to help:

With a crisis this large, and malicious actors this sneaky, American patriots are forced to seek facts from alternative sources. This is why we at VDARE.com continue to fight to bring you honest information.

And a fight it is!

That is why de-platforming and censorship have increasingly plagued VDARE.com—along with other Politically Incorrect sites—especially since Donald J. Trump’s 2016 epochal victory: we are the voice of the Historic American Nation, and the globalist Treason Lobby wants that voice silenced.

So no, the Historic American Nation is not committing suicide. Rather, it is being euthanized; put down like an unwanted, troublesome animal.

But, thanks to your support, we are not just defending ourselves, but growing in reach and effectiveness.

We think of VDARE.com as the point of the spear in the war to defend the Historic American Nation. However, a spearpoint is no use without a solid shaft and the energy to drive it. Together, VDARE.com, its friends and donors make a decisive weapon.

Today, thanks to our generous donors:

Today, VDARE.com is strong. But to stay strong requires unceasing effort and continuing financial support. We are here to stay, and we want you to be here with us.

We cannot rest—and we must ask you for help.

VDARE.com will not stop providing deep and honest coverage and analysis of immigration and other issues pertaining to the survival of the Historic American Nation.

We are committed—because we cannot be otherwise. The stakes are too high.

Please support our mission with a donation today.