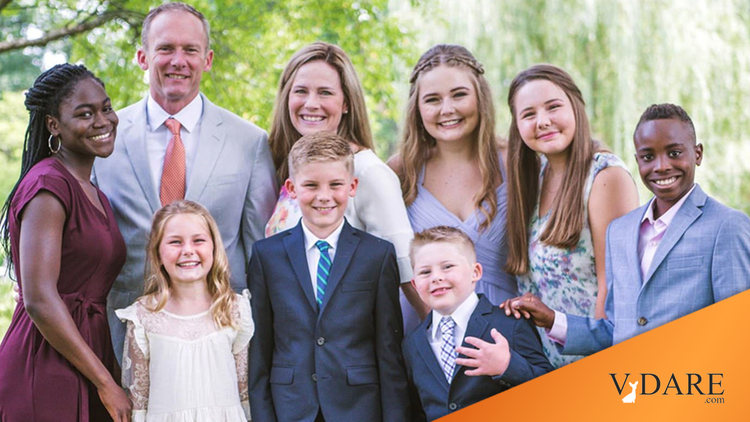 Amy Coney Barrett: Why Is No One Asking About Her Haitian Adopted Children?

The nomination of Judge Amy Coney Barrett to the U.S. Supreme Court has provoked huge controversy. She’s a Christian who might replace an aggressive Jewish legislating Leftist, meaning she’ll probably tip the court in a more conservative direction. But the fact that she has two adopted black immigrant children (in addition to five of her own) has, needless to say, not surfaced in the hearings—although Ibram X. Kendi's response to it, below,  did. It's not the kind of thing you're allowed to ask about. Which is too bad. What kind of white people adopt black children?

Of course, in doing so, Barrett has unintentionally “gaslighted” liberals and minority activists. Conservatives are supposed to be evil racists, yet this committed Roman Catholic has adopted two black children from Haiti. This has led to cognitive dissonance—when where the way the world is contradicts the way your ideology tells you it should be.

People deal with the confusion this causes either by accepting that their ideology is empirically wrong or by coming up with some desperate way of justifying their worldview. They will express this with great emotion, because they know, deep down, that it’s wrong and they want to dissuade people from criticizing it.

So it turns out that Barrett has adopted two black children because she’s a racist. According to “anti-racism” activist and academic Ibram X. Kendi;

Some White colonizers “adopted” Black children. They “civilized” these “savage” children in the “superior” ways of White people, while using them as props in their lifelong pictures of denial, while cutting the biological parents of these children out of the picture of humanity

Thus “cognitive consonance” has been achieved! The nasty racist conservative who adopted black children did so as an act of “colonialism”—because she is a “racist” and a Bad Person.

Senator John N. Kennedy, (R-LA) condemned Kendi, although he referred to him as "some butthead professor" rather than "some black professor."

"They are my children who we love and who we brought home and made part of our family and accusations like that are cruel." pic.twitter.com/tgrhUe2zM4

Perhaps someone should dispassionately look at the kind of people who in engage in adoption and specifically in interracial adoption.

Fortunately, this has been done by Edward Dutton, of the Ulster Institute for Social Research in London, and Guy Madison, a psychologist from Umeå University in Sweden [Why do middle-class couples of European descent adopt children from Africa and Asia?, Personality and Individual Differences, 2018].

According to the researchers, the key issue is differences in so-called “Life History Strategy” (LHS). We are all on spectrum from a fast LHS to a slow LHS.

Those with a fast LHS are adapted to an ecology which is easy but unstable, full of unpredictable dangers such as wild animals and outbreaks of disease, which means you could be wiped out any minute. Thus, they “live fast, die young” and invest most of their energy in sex, having as much sex with as many people as possible, hoping that some of their numerous offspring will survive. They are aggressive, to respond to sudden dangers, and create weak social bonds, as anyone could be suddenly killed.

In contrast, Slow LH strategists are evolved to an ecology which is harsh but predictable. This starts to develop once the ecology reaches the carrying capacity for the species, meaning that members start to compete with each other. They are more likely to succeed in this competition if they adapt to the predictability of the environment: they will meet people again; they can plan for the future. Also, as the environment is harsh, if they simply have lots of children, and don’t look after them, they could all be wiped out. So they start to invest less energy in copulation and more energy in nurture.

In such a harsh world, Slow LH strategists are also more likely to survive as part of a group. Life also slows down so you can learn about the more complex environment, meaning later puberty, for example. So a slow LHS is associated with a desire to nurture in general and thus low negative ethnocentrism, high altruism, empathy, Conscientiousness (impulse control and following group rules) and intelligence, because this allows you to plan for the future, be future-oriented and make correct predictions.

According to researchers Dutton and Madison, who draw upon various large-scale surveys, socioeconomic status is associated with a slow LHS. People with high socioeconomic status tend to have high IQ and they also tend to be high in Conscientiousness and, to a lesser extent, Altruism and Empathy (though there are always individual exceptions).

As such, you would expect middle class people who were infertile to be more likely to adopt: they report 23% of US high school graduates would potentially adopt compared to 48% of “college graduates or higher.” The latter are also less likely to believe that it would be “harder to love an adopted child.”

Among Whites who adopt Blacks, 53% were at least university graduates.

Then there is the issue of race. The researchers report that Blacks—on numerous measures such as personality traits, sexual promiscuity, negative ethnocentrism and puberty age—are faster LH strategists than Whites. This means they should be less pro-nurturing and more ethnocentric.

Consistent with this, Dutton and Madison find that 50% of White women would adopt if they were infertile, but this was so for only 35% of Black women.

Blacks were more likely to feel that you would be less able to love an adopted child, and more likely to adopt relatives than were Whites. Also, 95% of Black adopters had adopted a child of their own race compared to 81% of White adopters.

Dutton and Madison note that Asians have a slower LHS than Whites, but are less likely to adopt. However, they suggest that this may be because, as the ecology becomes extremely harsh, ever narrower niches must be found to survive, meaning that the components of a slow LHS start to break-up.

Hence, Asians are slower overall but faster on certain traits—their generalized nurture being so low than they tend not to even own pets. But they are extremely nurturing to their own children, more so than Whites.

Dutton and Madison also argue that women typically follow a slower LHS than men. As their involvement with the child is inescapable, they invest more energy than do men in nurture than in sex.

Thus they are far more in favor of adoption, with only 17% of them saying it is harder to love an adopted child compared to 28% of men.

So, the big issue in understanding why it is that educated, white women—such as Judge Barrett—who pursue interracial adoption is slow LHS: in other words, they are kind, nurturing, non-racist people.

Although Dutton and Madison did not look at this, it has also been found that religiosity is associated with a slow LHS [The Measurement of Human Life History Strategy, by A.J. Figueredo et al., Personality and Individual Differences, 2013].

So this might also predict, in extreme cases, generalized altruism and thus interracial adoption.

That said, and to be fair to Kendi, Dutton and Madison do look at potential mercenary aspects to transracial adoption.

They note that home adoptees in Western countries are likely to be the children of drug-addicts who will be damaged and will inherit criminal traits, such as low IQ and poor impulse control. So a foreign adoption, of children who presumably lack these traits, may actually lead to an easier life for the adoptive parents.

The researchers also observe that parents may feel a sense of disgust towards the White child of low status in a way that they will not towards a foreign child of a different race, who is not being part of their group.

Also it is clearly true, they note, that adopting a Black child is a means of virtue-signalling and we might expect White people, being more intelligent, to better understand the benefits of doing this.

But overall, the study seems to imply that transracial adoption is higher among middle class White people not because these people are “racist”—but because they are simply extremely high in generalized altruism and they are strongly evolved to nurture and be kind.

But there’s another issue. Amy Coney Barrett’s interracial adoptions do suggest that she may have no awareness of race realism—not impossible in her intellectual milieu. The plain fact is that interracial adoptions regularly don’t work out well, for example in the case of Colin Kaepernick and born-again Never Trumper David Frum’s family [The Prodigal Frum, The Nation, July 11, 2012]. How could she not be aware of this before inflicting it on her family?

Importantly, the possibility that the Disparate Impact of objective employment tests may actually be the result of systematic IQ differences has never been frankly presented to a U.S court.

How will Amy Coney Barrett respond when it is?