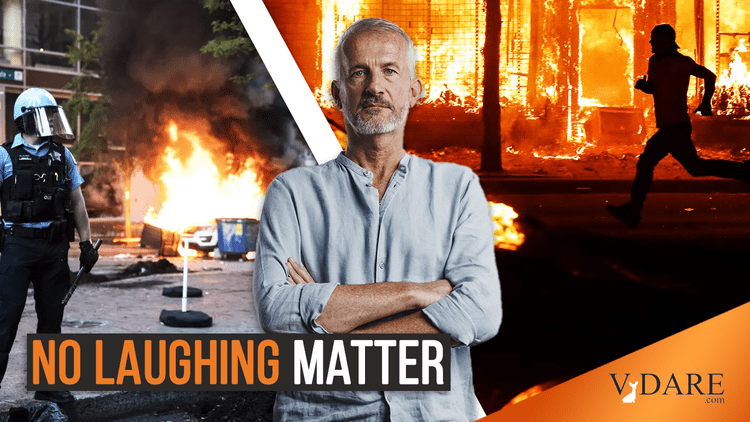 Ann Coulter: Antifa Are A Laugh Riot—Until They Come For You

Earlier: Ann Coulter On Charlottesville: When Liberals Club People, It's With Love In Their Hearts

I wonder if Milo Yiannopoulos, Ben Shapiro, Charles Murray and Heather Mac Donald are reacting to these antifa riots the same way I am.

I mean, not that anyone of us would enjoy the sight of reporters being trapped, chased through the streets and physically assaulted by antifa goons. Or liberal Democrats having to defend their homes with guns in Saint Louis, MO. Or the president hiding in the White House bunker as antifa lays waste to Lafayette Park. Or the mayor of Seattle WA, finally shutting down the CHAZ “summer of love” when the mob came to her house.

They’re all “peaceful protesters”—until they come near you.

Imagine that instead of being a president, mayor or reporter in the vicinity of mentally unbalanced, historically illiterate, thuggishly violent lunatics … imagine that you, personally, are the window they want to smash.

Now you know what it’s like to be a conservative trying to give a speech on a college campus today. (Thanks for all the help, guys!)

Neither the conservative media nor elected Republicans gave a crap about the left-wing paramilitary force that’s been mobilizing since Trump’s election.

Through it all, conservatives stuck their heads in the sand and rationalized insane liberal violence. It was the path of least resistance—and also a smart business move. Cowards could pitch themselves as the “reasonable” ones, then sit back and watch as their more popular conservative competitors were deplatformed, shadow-banned and outright canceled.

Over and over again, conservatives made excuses for doing nothing. They told themselves:

It’s only Milo—he’s shocking, not the kind of nuanced conservative thinker I am.

It’s only Gavin McInnes and his “Proud Boys”—he’s funny, whereas I am aggressively humorless, so I’m safe.

It’s only Heather Mac Donald and Charles Murray—they write about crime rates and I.Q. I steer well clear of any topic that might trigger liberals!

And thus were the most interesting and popular personalities on the right scrubbed from the public square by violent, low-I.Q. criminals. How tiny is the circle of speech and behavior you’ve permitted yourselves, conservatives?

Now, hordes of these cretins have taken control of the streets, and the only pushback is the president cowering in the White House, tweeting “LAW & ORDER!” Yes, Churchill retreated to a basement, too—in Whitehall, where he planned a war that saved the world. He didn’t tweet out “HITLER! BAD!”

For 3 1/2 years, antifa was never punished for anything it did. To the contrary, they were praised. Private citizens who fought back were defamed as “white supremacists” and imprisoned.

As a result, more than 200 of the rioters were placed under “arrest,” (a police technique in use at the time). Prosecutors had mounds of evidence, including video, undercover agents and law enforcement witnesses.

But D.C. judges Lynn Leibovitz and Robert E. Morin made sure almost all charges were dropped. Only one rioter, facing 70 years for felony rioting and assault on a cop, served any time in prison. Judge Leibovitz suspended all but four months of his sentence.

No congressional push to impeach the antifa-friendly judges, no separate federal prosecutions of the out-of-state rioters, no segments about this outrage on Fox News.

When Yiannopoulos was to speak at Berkeley in February 2017, 1,500 protesters, including more than 100 antifa, set fires, smashed windows and threw rocks. In reaction to this, Berkeley punished Milo and canceled the speech. (Not to brag, but 2,000 antifa tried to shut down my Berkeley speech last fall but it went off without a hitch! This was mostly thanks to the Bay Area Proud Boys. Hahaha, antifa!)

There was only one arrest. Soon, Milo was completely deplatformed and disinvited by the toothless, collaborationist CPAC.

President Trump responded to the Berkeley riots by sending in the National Guard to protect free speech at a public university. JUST KIDDING! He tweeted: “If U.C. Berkeley does not allow free speech and practices violence on innocent people with a different point of view—NO FEDERAL FUNDS?” … and then of course did nothing. Positively Churchillian!

That was at least better than Sens. Mitt Romney and Marco Rubio, who praised antifa for raining violence on protesters in Charlottesville, Virginia, in August 2017. The senators called the masked psychotics anti-fascist, apparently unaware that by “fascist,” antifa means them.

Can anyone remember what that protest was about? Oh yes, the tearing down of a Confederate statue.

In 2018, the night before Vice magazine founder McInnes gave a speech at the Metropolitan Republican Club on the Upper East Side, antifa smashed the club’s historic windows and spray-painted the anarchist “A” on the front door. Sadly for antifa, when they showed up to shut down the event the next day, they were met by McInnes’ Proud Boys—a multiracial social club for patriotic men who don’t mind a good scrap.

The speech went off, the attendees were protected, and the Proud Boys walked away. But antifa loons circled back for a sneak attack, hurling a bottle of urine at the Proud Boys. Although well outnumbered, the Proud Boys proceeded to kick skinny antifa butt. (Only the antifa girls are fat.)

Guess who was prosecuted? The Proud Boys—by Manhattan D.A. Cyrus Vance Jr., the same guy who allowed Jeffrey Epstein and Harvey Weinstein to wantonly rape women and girls in his jurisdiction, year after year.

Two Proud Boys are sitting in prison right now, sentenced to four years for fighting back. McInnes himself was thrown off every social media platform and forced to announce that he was stepping down from the Proud Boys.

Not one antifa was even arrested. NYPD: Oh darn. We couldn’t catch them. (Hey—maybe send the Proud Boys next time!)

But I’m sure you’ve heard all about it on Fox News and other conservative—oh no, wait, you haven’t heard about this from anyone. Democrats used our majestic system of justice to shield antifa from any private citizen who fights back. Not one elected Republican, including our bad-ass president, lifted a finger to defend McInnes and the Proud Boys.

Conservative sunshine patriots said to themselves: Those guys have tattoos! They like to fight! I’m a “constitutional conservative”!

The left has been laying the groundwork for this anarchist takeover for a long time. But even they must be amazed that the conservative response was to roll over and play dead. Except maybe they’re not playing.

Post
Federal Workers: You Get Today Off
MORE...
POPULAR TAGS