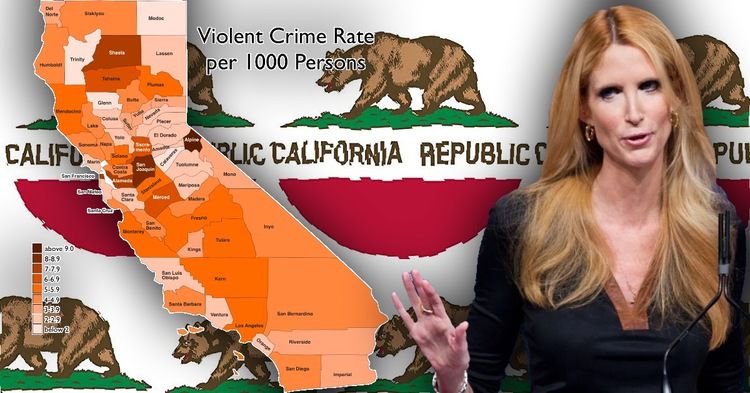 Ann Coulter: California Dems Show Us The Future. Run For Your Lives!

In this column, I will prove that Democrats: 1) Don’t care about “Russians,” (Ukrainians?) or anyone else interfering with our democracy; and 2) they also don’t give a crap about guns.

Let’s begin by looking at the Democrats’ Platonic ideal of a democracy: California!

California is wholly controlled by the Democratic Party. The governor is a Democrat. The lieutenant governor is a Democrat. The attorney general, secretary of state and treasurer are Democrats. All these positions have been held by Democrats since the governorship of Arnold Schwarzenegger (who was a Democrat). The state Senate is just under two-thirds Democratic, while the assembly is more than two-thirds Democratic. Both U.S. senators are Democrats, as are 46 of 53 members of Congress.

And what a paradise they’ve created! For the last several years, with a direct pipeline to the fifth-largest treasury on the planet, California has been waging war on decent people in favor of drug addicts, the mentally ill, criminals, the homeless and transgenders.

Big political movements used to begin in California. Proposition 13’s cap on property taxes led to President Ronald Reagan and a nationwide tax revolt. Proposition 209’s ban on affirmative action was followed by Supreme Court rulings restricting the government’s ability to discriminate on the basis of race. California’s anti-crime rebellion, including a massive prison expansion and the voters’ removal of liberal lunatic Rose Bird from the state’s highest court, foreshadowed an anti-crime pushback across the country.

These days, the only California-originated idea to sweep the nation is: banning plastic straws. The state is a calamity. Its optimism and vigor are gone. Instead of “The Golden State,” California is now “The Human Excrement State.”

Let’s just pray that California is no longer a window into our future.

People are leaving the state in droves—and more than half of those who remain say they’d like to leave, according to a survey published in The San Francisco Gate earlier this year.

After the last census in 2010, California’s congressional delegation was unchanged. With the 2020 census, it’s expected to lose at least one seat and possibly two, according to Public Policy Institute of California. (If the federal government followed the Constitution and counted only citizens, it would lose a lot more than that.)

It takes single-minded fanaticism to wreck California. Within the borders of a single state, you can visit Yosemite, the Pacific Ocean, Death Valley, redwood forests, the snow-capped Sierras and the pastoral vineyards of Napa and Sonoma, and go to the beach on Christmas Day.

But starting with Gray Davis’ refusal in 1999 to appeal an activist judge’s announcement that it was “unconstitutional” for taxpayers not to give welfare to illegal immigrants—an initiative that had passed overwhelmingly just a few years earlier—California’s elected officials began an all-out war on its own citizens.

The most clear-cut evidence that Democrats do not care about democracy is Gov. Gavin Newsom’s recent decision to halt the death penalty (unless administered by an illegal alien, as in the case of Kate Steinle).

I doubt any other state’s voters have been more emphatic about their support for the death penalty than Californians, voting for it in statewide initiatives in 1972, 1978, 2012 and again in 2016—just three years ago.

But earlier this year, Gov. Newsom flagrantly disregarded the voters’ repeated endorsement of capital sentences and single-handedly imposed a moratorium on the death penalty.

Forget Facebook ads. Who cares if Russians hack into our voting machines and change the vote totals? Democrats are going to ignore the results anyway.

Their vaunted concern for the sanctity of our elections is so much horse crap.

It’s the same with guns. This September, during a fiery debate on guns, the left demanded “red-flag laws” to take guns away from citizens after having their politics, their writings, their previous exercise of free speech examined on a granular level by bureaucrats empowered to revise the Bill of Rights. In the middle of that debate, Gov. Newsom commuted the sentences of 21 convicted felons—almost all of whom were serving lengthy terms for murder or attempted murder with a gun.

And get this: Newsom specifically cited the unfairness of enhancing a criminal’s sentence merely because he used a gun when committing a crime.

Innocent people walking the street right now—playing basketball, eating at vegan restaurants, going bowling—better enjoy themselves. Some number of them will soon have their lives snuffed out because of the governor’s willful decision to begin the process of releasing people who have already committed violence with guns.

Liberals don’t care about guns in the hands of violent criminals. They’re coming after the guns of conservatives.

Like a magician revealing his trick, the governor of California provided the proof, making it absolutely clear that Democrats don’t give a fig for democracy and aren’t disturbed in the slightest by gun violence.