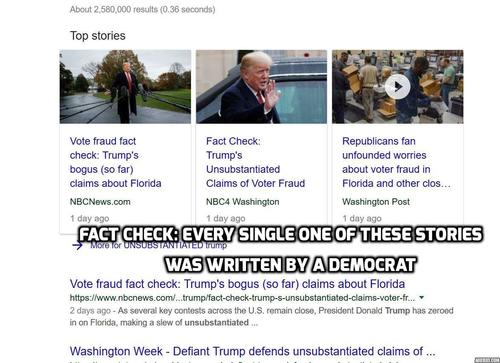 Ann Coulter: GOP To Dems—Here, Take Our Wallet, Too! 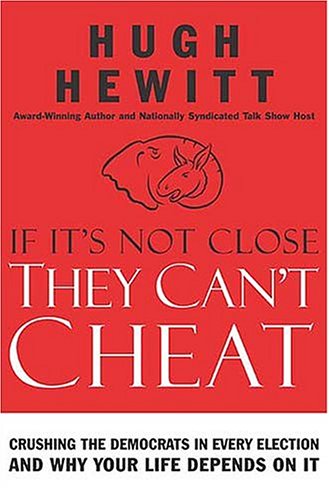 Election recounts would be more plausible if Democrats occasionally let the Republican win. But they don't. Ballots miraculously discovered days and weeks after the election—in the back seat of a car, after helpful "corrections" to the ballots by election supervisors, etc.—invariably result in a surprise win for the Democrat.

Voters are just supposed to accept that, unless Republicans win an election by an insuperable margin, the Democrats will steal it.

And the thieving is cheered on by our media. Whenever President Trump has the effrontery to mention that GOP victories are being stolen by corrupt Democratic officials, the media snippily note that his claim is "UNSUBSTANTIATED."

Thus, for example, in the first 60 seconds of CNN's "Erin Burnett OutFront" on Monday, Burnett said:

Hey! I have an idea! Why doesn't CNN rustle up some reporters to go and investigate the biggest story of the year?

No, the burden is on random Republicans—who have jobs other than "reporting the news"—to produce bulletproof evidence of voter fraud. Otherwise, it's just a wacky coincidence that these "recounts" always result in mysterious new votes for Democrats.

If a freelance investigative reporter like James O'Keefe actually does produce the evidence that our media are too lazy and biased to get for themselves, they sneer that O'Keefe can't be trusted. He's not a real reporter!

What a real reporter does is call up some left-wing outfit, get a quote, and peremptorily announce that there has never been an illegal ballot cast in any election, ever.

We called the Brennan Center for Justice, and they assured us that voter fraud doesn't exist. I can prove I called—I'll show you my phone records! We're not going to send our reporters on a snipe hunt. Oh, and we also got an interesting brochure on voter suppression, such as the Nazi-inspired idea that voters should know how to spell their own names.

That's what we get from our crackerjack media. Journalists' phones should be taken away, so they'd be forced to do actual reporting.

Republicans control the state legislature and governor's office in Florida. They control the U.S. Congress and the presidency. If that's not enough to prevent two statewide Florida elections from being stolen, the GOP is more useless than I'd already imagined.

Here's a primer for Mitch McConnell and Paul Ryan on how to deal with all the Senate and House election "recounts" that keep magically flipping seats to the Democrats.

In 1974, Republican Louis Wyman won his race for U.S. Senate in New Hampshire, beating Democrat John Durkin by 355 votes. Durkin demanded a recount—which went back and forth by a handful of votes until the state's Ballot Law Commission concluded that Wyman had indeed won.

Wyman was certified the winner by the New Hampshire secretary of state and was on his way to Washington, D.C., when ... the Senate refused to seat him. New Hampshire's certification of Wyman as the winner meant nothing, because, you see, Democrats held a majority in the Senate.

The Senate spent months examining disputed ballots. Unable to come up with any method whereby they could declare the Democrat the winner, the Senate forced New Hampshire to hold another election.

Demoralized Republicans stayed home and, this time, the Democrat won.

Hey, Mitch! Don't Republicans hold a majority in the Senate?

In 1984, Democrat Frank McCloskey won a razor-thin re-election to the House from Indiana's 8th Congressional District. The state held two recounts, both of which the Republican won. The Washington Post reported that there were "no allegations of fraud" in the recount, and 90 percent of ballot disqualifications had been agreed to "by election commissions dominated by Democrats."

But the Democratic-controlled House simply refused to seat McIntyre. Instead, the House undertook its own "recount." You'll never guess who won!

Don't Republicans have a majority in the House for six more weeks?

In 2008, Sen. Norm Coleman of Minnesota won his re-election bid against challenger Al Franken by 725 votes. But for several weeks after the election, Democratic precincts kept discovering new votes for Franken—including ballots sitting in cars, as well as a write-in vote for "Frankenstein"—which was counted as a vote for Franken. (Duh.)

These late-discovered ballots eventually put Frankenstein ahead by 312 votes, whereupon he was immediately certified the winner by the George Soros-backed secretary of state.

The U.S. Senate was in Democratic hands, so there was no question but that Majority Leader Harry Reid would seat the cheater, Franken. And that, kids, is how the Democrats got the 60th vote for Obamacare.

Four years later, we found out that more than 1,000 felons—ineligible to vote—had cast ballots in the 2008 Minnesota election. (To state the obvious, felons support Democrats by about 10-1.)

In the middle of the Democrats' open theft of the Indiana seat in 1984, the New York Times pompously reminded readers of the "basic constitutional principle that Congress is the judge of its own membership and that lawmakers can overrule state laws in making that determination."

You've already caved on Arizona, Mitch. How about taking a page from the Democrats' playbook? You don't have to go full Daley Machine. Democrats steal elections they actually lost. Republicans just want you to hang on to the seats they won.

Her book, ¡Adios America! The Left’s Plan To Turn Our Country Into A Third World Hell Hole, was released on June 1, 2015. Her second-latest book is IN TRUMP WE TRUST: E Pluribus Awesome.