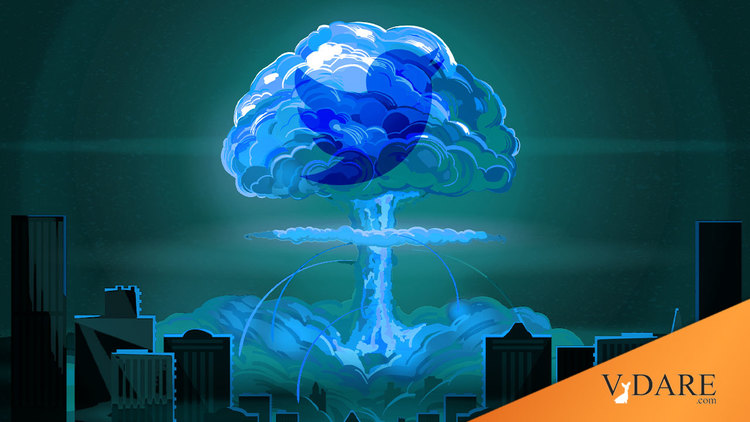 Earlier: Ellen K. Pao In Jeff Bezos' WASHINGTON POST On Elon Musk: We Must "Prevent Rich People From Controlling Our Channels Of Communication"

I want to send flowers and chocolates to the Twitter employee who permanently suspended   the Babylon Bee. Maybe a car. Apparently, it was the inanity of that decision that incensed Elon Musk, whereupon he decided to purchase the entire platform to stop the censorship.

Liberals, five minutes ago: He believes in free speech? Fascist!

Loads of liberals are threatening to leave Twitter if Musk’s deal goes through. To those who will miss the New York Times’ Charles Blow [email him], I understand. I will try to ease the pain by tweeting, every day for the rest of my life: “[FILL IN THE BLANK] is racist!”

If you’re wondering why liberals are freaking out over the idea of free speech on one single internet platform, it’s because their ideas are so well thought-out and compellingly argued that they must have total control of all social media, mainstream media, entertainment, elementary schools, colleges, universities, nonprofits, corporate PR departments, government funding agencies, advertising firms and on and on and on. Any interruption to Big Brother being pumped into our brains 24 hours a day, and everything falls apart.

A hysterical Twitter employee in the “toxicity and health” department (I’m not making that up) denounced Musk to a Times reporter, saying, “he doesn’t know anything about our policies and what we do … his statement about our [algorithm] was f***ing insane … Were (sic) just gonna let everyone run amok?”

Running “amok” is defined as: calling a man in a dress a “man.” That’s the Babylon Bee tweet that led to a Twitter death sentence, with no trial, no due process, no appeal.

Twitter employees, the Times reports, are “worried that Mr. Musk would undo the years of work they have put into cleaning up the toxic corners of the platform.” (Yes, you are correct: These are the same people mocking 4-year-olds trapped in kindergarten classrooms with teachers telling them whiteness is evil and they can be any gender they want.)

Do Twitter employees know how Twitter works? Take a theoretical hate-speaker—a fat-shaming Klanner, an anti-vax Nazi or Dave Chappelle. Their literally murderous tweets are invisible—unless you intentionally, willfully, mindfully click their “follow” buttons. In order to avoid seeing “toxic” tweets, this is what you have to do: NOTHING!

But Twitter moderators are terrified that someone, somewhere, is laughing at a tweet. They are the mutant baby of medieval scolds and the East German Stasi.

Conservatives can only dream of a Twitter without constant, daily self-censorship, without their followers being secretly removed, their feeds hidden, their accounts being shadow-banned—or completely banned.

But what if this is all just Musk doing an elaborate troll?

Somebody should buy Twitter, as I explained last November to the richest person I know under 70. (The richest people I know over the age of 70 are giving all their money to Sen. Tim Scott and Candace Owens to prove they’re not “racist.”)

Here it is, my personal private email, names redacted:

Subject: You should buy Twitter and I’ll tell you why …

ALL news comes from Twitter. Facebook is for getting in touch with high school friends and the “topic” groups are mostly nuts—anti-vax, stop the steal, black conspiracy theories. Same w/the newer platforms like Telegram. Snapchat and Instagram are for “influencers,” wannabe Kardashians.

Twitter is where the NYT, Politico and Fox News etc. get their stories and find their guests. Have one of your ppl read my Twitter feed and then watch XXXXX for a week. I’m his unpaid booker and content provider, except, sadly, when I get lazy and he goes off on his own with some moronic “expose” …

No one under 60 watches cable news, but YYYY, who’s about 90, calls me after XXXXX’s show every night and breathlessly tells me about stories that are 12 to 36 hours old on Twitter, half the time from my Twitter feed.

Even w/Twitter’s censorship of conservatives, the smartest right-wing pushback on the news has all come from Twitter. e.g. this week, HUGE meme on Twitter about the establishment media describing the BLM terrorist mowing down the lovely xmas parade in Waukesha as a “car crash,” or “SUV runs into parade.” There was also the msm’s decision to describe every rt-wing response to lib lunacy as “Republicans Pounce …”

There are a lot of smart ppl on Twitter (also idiots, but no one has to follow the idiots) who could never be employed by the NYT, National Review or Fox. Andy Ngo exposing antifa, the anti-CRT guy posting school teaching materials, the guy who keeps graphing mask-wearing vs. covid cases (“I.M.” on Twitter), the real-time videos of BLM riots and arson—none of this would exist but for Twitter.

Before that, the defense of Rittenhouse, Jake Gardner and Nick Sandmann—it all came from Twitter. (Recall National Review was nastily ANTI-Sandmann and anti-Rittenhouse.)

We used to have Drudge, but he’s not serving the function of vox populi anymore. Without Twitter, the only thing Fox News would talk about is the Middle East [We may now substitute “Ukraine”]. All important news comes from Twitter.

1) where the action is, massively influential;

2) perfect for someone else to take it over and make it better, merely by firing the Twitter censors—Twitter aggressively banned tweets that were pro-Rittenhouse (accurate as it turned out), about Hunter Biden (ditto); plus there’s the aggressive censorship of specific popular conservatives, who are either thrown off (e.g. Gavin McInnes and Milo) or shadow-banned (me and others);

3) it would be pretty easy to turn into a money-making operation! The big issue for all news—TV, cable, Amazon Prime, and all online content is how to get ADVERTISING in front of consumers. No one wants to click through ads. The great thing about Twitter is that you could insert ads in people’s Twitter feeds—and it wouldn’t be annoying. I’ve never understood why Dorsey doesn’t do that. It doesn’t distract much, you just keep scrolling if you’re not interested.

Twitter is a fabulous product. It is, as Musk says, the nation’s public square. With a few minor tweaks—stop being Nazi block-watchers and allow ads in people’s Twitter feeds—instead of Tesla funding Twitter, someday Twitter could fund Tesla.