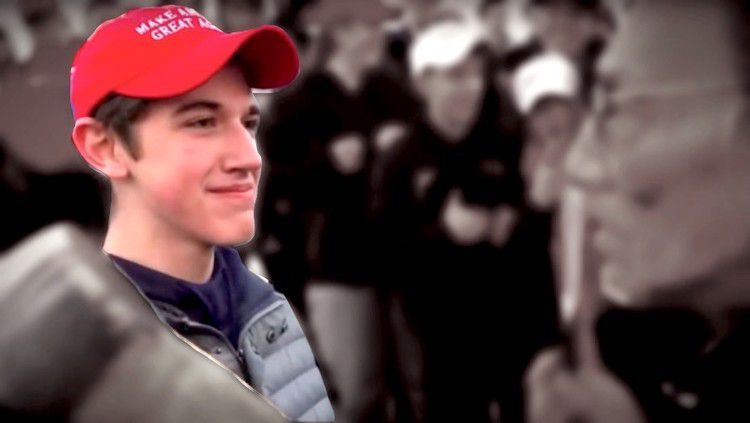 Ann Coulter On Covington Catholic Lawsuit: Court To The WASHINGTON POST—Don’t Try Too Hard To Get It Right

See, earlier, by James Fulford: NY TIMES Vs. Sullivan And The Law Of Libel: Press Clings To Its Right To Lie

This is why people of sound judgment and good character despise the press, and also the courts.

For three days running after the annual March for Life in Washington, D.C., earlier this year, the Post published vicious hit pieces—six articles and three tweets, along with a deceptively edited 59-second video—portraying the teenaged boy as a Goebbels-level racist, who violently smirked at a hapless Indian.

Thus, according to the Post, while waiting with his classmates at the Lincoln Memorial for their bus to arrive, Sandmann:

This is "true" in the sense of being the exact opposite of the truth.

Switch the aggressor and the prey and you've got the picture—as proved by a one-hour, 46-minute video triumphantly posted on Facebook by the Black Hebrew Israelites the same day as the Post's first article on the incident. (They were the ones screaming at the Covington boys, calling them "incest babies," "dirty ass crackers," and "future school shooters." Sounds like a nice school trip.)

As the video makes clear, Sandmann was standing in the same place the whole time, minding his own business, when Phillips made a beeline to him, planted himself in front of the teenager and began banging his drum and singing loudly inches from Sandmann's face.

At no point did Sandmann, or his friends, chant "build that wall," "Trump2020," or "go back to Africa" or anything of the kind.

They were doing school cheers.

Phillips' harassment of the teenaged boy only ended when the school bus arrived to pick up the kids, and Sandmann boarded it — not when Phillips, in humility and grace, walked away, as the Post reported.

The video also shows that, as soon as Sandmann departed, Phillips turned and celebrated his subjugation of the teenager, as a fellow Indigenous Person shouted: "I got him, man, I got him! ... We won, Grandpa, we f------ won, Grandpa!”

Last Friday, Judge Bertelsman threw out Sandmann's lawsuit against the Post on the grounds that who walked up to whom, who intimidated whom, and who was banging drums in the other guy's face is:

c) something the Post's reporters were told by a guy (the Indian); and

d) not a specific reference to Sandmann—despite putting his photo all over their newspaper and Twitter feed. (Why, it could have been anyone in a MAGA hat with an Indian banging a drum in his face!)

Of course, without the Post's "opinions," "subjective" terms and unquestioning acceptance of what some guy told them, there would have been no story. BREAKING: A group of Covington Catholic kids stood in general vicinity of an Indian and showed no particular reaction.

The judge acts as if the Post was absolutely required to write the story, and reporters were within their rights to use their own impressions—even if they were wrong—with no obligation to check the facts, even to the point of turning an innocent teenager into a worldwide object of hate.

You probably want to know more about the judge, so here's a report I've improvised:

Bertelsman is a draft dodger [opinion] and has been accused of cheating [subjective term] on his bar exam. (FN-5.)

NOTE: The part of this column giving the judge's biography was written in haste, so didn't have time for fact checking. However, even assuming arguendo that the above statements were "about" Judge Bertelsman, I was careful to keep all assertions within legal realm of "opinion," "subjectivity" and "things people told me."

I did a great job. It's legally unassailable.

FN-1: As Judge Bertelsman ruled, "surrounding" is a subjective term that can mean "walking away" or "standing still."

FN-4: This is my opinion based on Judge Bertlesman's siding with corporate giant The Washington Post crushing a lone individual, Nick Sandmann. In every other context, we're supposed to take the individual's side, even if it's someone who took a space heater into the bathtub with him. Not anymore!

FN-5: Bertelsman actually served in Vietnam, but "serving" "in" "Vietnam" is subjective, and I choose to regard it as not going to Vietnam.