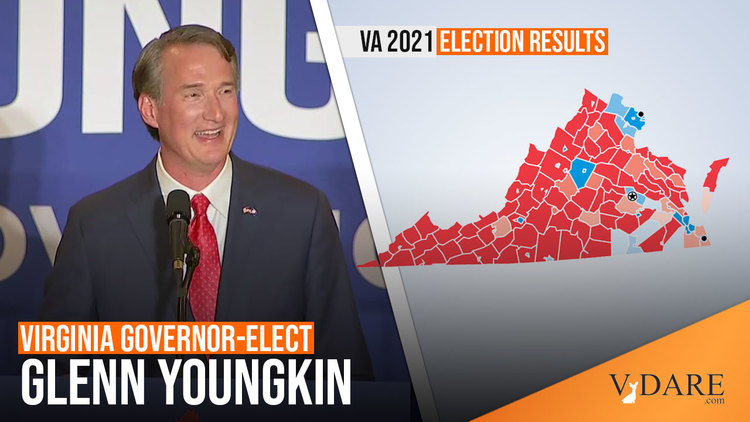 Earlier: The Youngkin Win Shows Anti-CRT Is A Winning Issue

The Republican sweep in Virginia Tuesday night has nullified that claim. Glenn Youngkin beat Terry McAuliffe in the governor’s race. Republicans took the lieutenant governor’s office and, most important, beat the incumbent, George Soros–installed attorney general. In a shocking upset, the GOP even flipped the House of Delegates.

All this, despite the incessantly repeated claim on MSNBC and CNN that “CRT isn’t taught in Virginia schools!” uttered every five minutes like “Weather on the Ones!” Who were they trying to fool? Liberal women in New York? They don’t vote in Virginia. But MSNBC and CNN so enjoyed sneering about the stupidity of Republicans that they never bothered to consider that the people who would be voting could see with their own eyes what was being taught to their children.

Disturbingly, even with McAuliffe announcing that parents should have no say in what their children are learning in school—and then telling Virginia teachers that the white ones would have to go—the election was ridiculously close. The current tally is about 51% to 49%.

Liberals thought they had a lock on Virginia, no matter what lunacies their candidates spouted. They had a gigantic immigrant population (non-English speakers are a key Democratic constituency); illiterates (same), who were specifically given the right to vote by Democrats; and felons (duh), more than 300,000 of whom were enfranchised by the last two Democratic governors.

After Tuesday’s election, it looks like the Biden administration is going to have to ship a lot more immigrants into the Old Dominion. Bus in tens of thousands of Haitians and, in five or six years, McAuliffe can come out for white slavery and win.

That’s rough. Democrats had specifically earmarked those immigrants for Texas and Florida.

All night on Tuesday, liberal commentators kept talking breathlessly about the early vote / mail-in vote, correctly presuming it to be overwhelmingly Democratic. That should tell you what early voting is really about.

Early voting has nothing to do with the convenience of the voters. It’s about the convenience of Democratic operatives, who need weeks and weeks to drag their voters to the polls and help them fill out absentee ballots. Conveniently, Virginia has “no-excuse” absentee voting, allowing anyone to request a mail-in ballot for any reason, for up to 45 days before an election.

Ordinary voters don’t say, If I’m going to get out of work early, I’m gonna need a 45-day window. Nobody needs 45 days to do anything. That’s not a human-size requirement. It’s a Democratic machine-size requirement.

To collect ballots from their unmotivated voters, Democrats need to send out an army of operatives. Luckily, they have no shortage of manpower—anyone with an administrative job in education, sanitation or county government.

But they need time. A lot of time. One day of voting is not going to permit Democrats to collect ballots from every nursing home, halfway house and sober-living community in the state.

Republicans gain nothing from early voting because: 1) They don’t have government employees with no-show jobs who can spend weeks harvesting ballots; and 2) GOP voters tend to be self-motivated individualists who don’t need inducements to vote.

By contrast, Democratic voters need a lot of attention and a lot of handling. OK, OK, if it means that much to you, I’ll vote. How about giving me a ride? Oh, and I’m hungry—how about a box lunch? Democratic “get out the vote” drives are less informational operations and more like hauling the kids to Grandmother’s house.

But Republicans have been so mau-maued by the Democrats that they can barely put up a fight just to end the COVID-era voting rules. Remember the worldwide pandemic? In 2020, Democrats wailed: DO YOU WANT PEOPLE TO DIE??? We’re going to need universal mail-in ballots, months of early voting, same-day registration and no I.D. requirements.

But now they say Republicans are returning us to the dark days of Jim Crow for insisting on voting rules circa 2018.

Forget that. How about a federal law restricting elections to what is known as “Election Day”? The Constitution requires Congress to choose “the Day” of voting. It further states that the “Day shall be the same throughout the United States.” Make it a federal holiday. But make it one day.

Let’s get back to the GOP victory in Virginia. Fox News sure called that one! Fox commentators assured us that black parents were powering Youngkin’s campaign because of their love for … school choice!

Oh, give it up, conservatives.

Good grief! How did Youngkin win? There must be some mistake!

Which reminds me: What is the one demographic Trump lost in 2020, compared to 2016? Correct: white men. Trump 2020: the Platinum Plan! the American Dream Plan! [Jared in the background: Forget white voters, Dad. They have no place else to go.]

Relax, GOP donors, you may now go back to obsessing over the minority vote and pissing away the only swing voters in the country. At this very moment, money men in the Republican Party are looking at Virginia and saying, “You see? We’ve got to pass amnesty to win over Latinos! School choice to win black voters! Then, of course, we’ll need a big tax cut.”