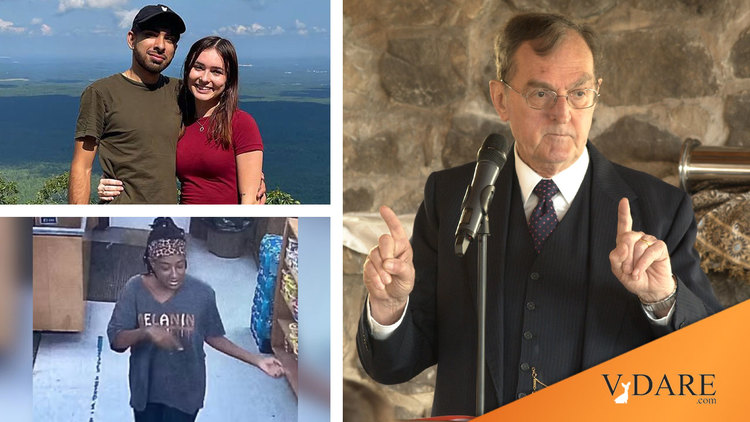 Ann Coulter On Derbyshire's "The Talk" (And The Dangers Of Reading NATIONAL REVIEW): "Fight Racism: Lock Up Criminals, Even Black Ones"

This is a cautionary tale for all Americans, both white and black.

Last Sunday, a college couple, 22-year-old Adam Simjee and his 20-year-old girlfriend, Mikayla Paulus, were driving through Talladega National Forest when they were flagged down by a black woman having car trouble. If I tell you the good Samaritans may have been National Review readers, you can probably guess that one of them ended up dead.

As they were trying to fix the car, the woman, Yasmine Hider, pointed a gun at them and demanded they walk into the woods and hand over their phones and wallets. At some point, Simjee pulled out his own gun and started firing at Hider, wounding her. She shot back, killing him.

The reason I suspect the couple were National Review readers is that the “good Samaritan” ruse was one of the bullet points in John Derbyshire’s famous “The Talk: Nonblack Version,” which got him fired from National Review in 2012—standing athwart history and mewling, “Please like me, liberals.”

Derbyshire hadn’t even published the piece in NR.

He was responding to a spate of lachrymose accounts of black parents describing “The Talk” they have to give their sons, instructing them to be super polite to police officers—smile and say, “Yes, sir”—lest the officer shoot them to death for no reason whatsoever. (Ask any police officer, and they will tell you black arrestees, to a man, are the politest people you will ever meet.)

In the piece, Derbyshire issued exhortations about treating black people with “the same courtesies you would extend to a nonblack citizen,” but then listed “some unusual circumstances,” requiring extra vigilance due to “considerations of personal safety.”

The “personal safety” rules concerned only complete strangers. His point was that when you have no other information to go on, you have to rely on statistics.

Derbyshire’s Rule 10 (h) was: “Do not act the Good Samaritan to blacks in apparent distress, e.g., on the highway.” He appended links to stories like the one that began this column.

Here are a few other examples from a general Nexis search for “good Samaritan w/s shoot! or kill! w/s car”:

Feel free to look them up, but I’ll save you the trouble and tell you: All the perps were black. National Review: DO NOT WARN OUR READERS ABOUT THE “CAR TROUBLE” SCAM!

Derbyshire did warn his readers, so NR editor Rich Lowry dumped him, denouncing the piece as “nasty and indefensible.”

Not good enough! Slate magazine’s William Saletan  [Email him]  thundered, complaining that Lowry had not attacked the “ugly,” “racist” column with sufficient ferocity. He, Saletan, would proceed to explain “what Derbyshire got wrong” [John Derbyshire’s Error | The ignorance of racial profiling, April 10, 2012]. Whereupon he demonstrated that he has no idea what the words “statistical” or “averages” mean—much less the phrase “[when] you have nothing to guide you but knowledge of those mean differences.”

Thus, his central complaint was: “Derbyshire thinks his data warrant his conclusions. But all his data references include the crucial term ‘mean’ or ‘average.’ They don’t tell you about the person walking toward you. They tell you what you can assess about the probability of danger when the only information you have is color.”

Yes, exactly, you complete moron. That’s the point, subtly indicated by Derbyshire stating that he was referring only to those occasions when you don’t have any other information about a person. (Do black parents giving "The Talk" remind their sons not to make assumptions about any particular cop walking toward them?)

Back in the halcyon days of Mayors Rudy Giuliani and Michael Bloomberg, we had one other fact to guide us: Criminals were in prison. Unfortunately for black people, a small percentage of their community commit a boatload of crime. But as long as criminals went to prison, New Yorkers could pass black men with little concern because if they were criminals, they’d most likely be locked up, not standing on a subway platform next to you.

Not anymore. Now, the criminals are out among us. There’s no possible way to evaluate a stranger, except the statistics. E.g.: Blacks, who make up about 20% of New York’s population, commit more than 70% of the shootings. In Los Angeles, blacks are only 8% of the population, but commit nearly half of the murders.

Suddenly, New Yorkers, Los Angelenos and anyone else living under Democratic control are behaving like the Rev. Jesse Jackson, who once remarked that when he heard footsteps on the street behind him, he would, “look around and see it’s somebody white and feel relieved.” He made that statement in 1993—the very year Giuliani was elected mayor, before proceeding to drive down crime rates and liberate black people from dangerous neighborhoods, as well as from suspicious looks.

This is the cautionary note for black people. The Democrats’ Free All Criminals policies have hurt black people in myriad ways—mostly by getting thousands more of them robbed, assaulted and killed each year—but also in other, more subtle ways, like this.

As Senate candidate Blake Masters of Arizona said—and the media lied about—it is blacks, frankly, who suffer the most when criminals aren’t locked up. And the Democrats don’t care.