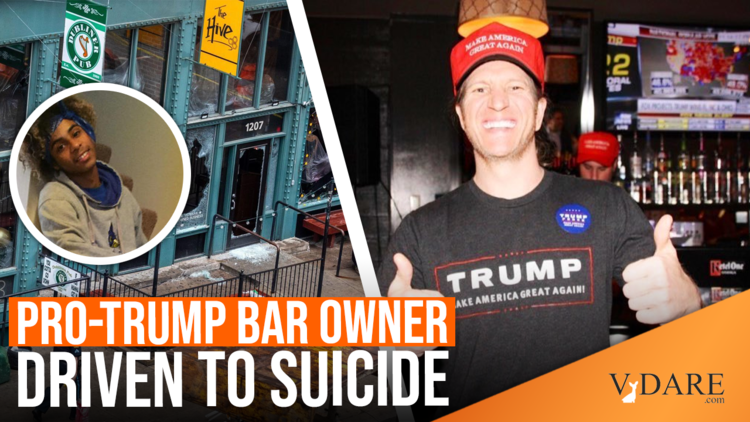 During a BLM “peaceful protest” in Omaha, Nebraska, on May 30 (over George Floyd’s dying of a heart attack while in police custody in Minneapolis), James Scurlock was peacefully protesting by breaking into an architecture firm—hoisting an office chair and hurling it into two computer monitors, then ripping a phone from a desk and throwing it against the wall, as his friend shattered another monitor—all of which was captured on video.

Nearby, Jake Gardner, an Iraq War veteran and Trump supporter, was keeping watch over the two bars he owned, The Hive and The Gatsby, aided by his 68-year-old father and a security guard. The peaceful protesters soon made their way to Jake’s bar, where they hurled a street sign through The Hive’s plate-glass window. He and his father rushed outside to prevent the peaceful protesters from storming his bar.

Scurlock’s friend, catching his wind after smashing computer monitors, knocked Gardner’s father to the ground. (It’s on tape.) Or as CNN’s Madeline Holcombe put it: “An unidentified man can be seen pushing Gardner’s father.” Gardner rushed to help his father, then backed away toward the bar, lifting his shirt to show the protesters he was armed, and telling them to move along. Again, it’s all on tape. Murmurings can be heard from the crowd: “That (expletive) got a gun” and “It’s not worth it (expletive) you stu–,”

At that point, peaceful protester Alayna Melendez leapt on Gardner from behind (not subscribers to the Marquess of Queensberry rules, these peaceful protesters), knocking him down and into the street, whereupon yet another peaceful protester jumped on top of Gardner, who fired two warning shots in the air, scattering his first two assailants. Again: all on tape.

Three seconds later, as Gardner was trying to get up, Scurlock jumped on him from behind and put him in a chokehold—which I believe is considered definitive proof of intentional murder when performed by a police officer. In videos, Gardner can be heard yelling, “Get off me! Get off me!”

With his right arm pinned, and Scurlock choking him, Gardner moved the gun to his left hand and shot over his shoulder, hitting Scurlock in the collarbone, killing him.

Or as the New York Times’ Azi Paybarah [Tweet him] explained it: “Mr. Gardner got into a fight with one man, James Scurlock, 22. The two scuffled before Mr. Gardner fired a shot that killed him.” They “scuffled.” It brings to mind the Times headline from Nov. 23, 1963: “President Kennedy Dies in Dallas After Scuffle—Albeit at Great Distance—With Lee Harvey Oswald.”

Let’s be fair, though. Maybe Scurlock jumped Gardner, or maybe Gardner jumped Scurlock. Who knows? It’s not like there are 4 million videos of the incident.

Gardner was immediately taken into police custody for questioning and held until 11 p.m. the next night.

The Democratic district attorney, Don Kleine, his chief deputy Brenda Beadle, and all the homicide detectives spent 12 hours that weekend reconstructing the incident with multiple videos. Their unanimous conclusion? That Gardner shot Scurlock in self-defense.

Despite the delusional claims posted on “social media” that Gardner used the N-word—which, as we all know, is grounds for immediate execution by any black person—none of the videos substantiate that. To the contrary, Scurlock’s own friend denied that Gardner said anything racial at all. (Apparently, you can’t believe everything you read on the internet.)

At 22, Scurlock already had a rap sheet a mile long, including home invasion, assault and battery, domestic violence—and, of course, he was in the middle of a crime spree that very night. Methamphetamine and cocaine were found in his urine.

(Why do I mention their sexual orientations? A lot of the hate toward Gardner seems to come from the transgender community for saying on Facebook that transgenders would be restricted to the unisex bathrooms after a man in a dress attacked a female customer in the ladies’ room.)

Twitter was full of unattractive humans claiming that Gardner was a “white supremacist,” which were dutifully reprinted in local media, such as this one from @nostudavab (Twitter banner: “F*CK TRUMP”):

“Club owner Jake Gardner shot and killed a protestor in Omaha on video, yelling racial slurs. he is openly racist and homophobic. he murdered James Scurlock, he’s proud of it, and he’s not in jail.” [Archive link]

Kleine responded to the mob’s demand for “justice” by calling in a black prosecutor, Fred Franklin, to make damn sure the grand jury indicted Gardner—whom Kleine (the elected D.A.) had found to be innocent. As he was expected to do, Franklin produced a series of fanciful indictments, including for manslaughter and making a “terroristic threat.” (The “terroristic threat” was Gardner lifting his shirt to show the peaceful protesters that he was armed.)

The special prosecutor’s ALL NEW EVIDENCE THAT BLEW THE OTHER FACTS AWAY was this: The night of the BLM protest, Gardner had posted on Facebook: “Just when you think ‘what else could 2020 throw at me?’ Then you have to pull 48 hours of military style firewatch.”

WHY WAS THIS MAN NOT IMMEDIATELY ARRESTED?

Gardner’s landlord, Frank Vance, immediately evicted The Hive and The Gatsby, and sent an anguished apology letter to Scurlock’s family (“deepest sympathy … the pain and suffering … losing a child to unnecessary violence … apologize for this horrible incident … time to heal … very deepest condolences”).

Gardner was facing 95 years in prison for shooting a career criminal who was choking him, and now he had lost his source of income. So naturally his friends tried to set up a GoFundMe account to help pay for his legal defense.

GoFundMe’s response? They immediately and repeatedly took down the page, based on their clearly stated policy: We don’t like you.

Here’s a thought, GoFundMe: Guaranteeing a fair trial for an individual accused of a crime isn’t the same as defending the thing he’s accused of. That’s the whole point: Gardner wanted to prove that he was innocent. Nope! No fair trial, no fair press, no livelihood, no GoFundMe. No chance.

Meanwhile, the family of the convicted criminal who jumped Gardner has already raised more than a quarter-million dollars on GoFundMe. (Funeral expenses can be costly!)

Poor Jake Gardner didn’t stand a chance against the raging, hate-filled multitude. Even those sworn to uphold the law, like Kleine and Franklin, leapt in with the mob. And a corporation whose business it is to enable people to raise money for just causes such as getting a fair trial refused to do business with him, not unlike the Memphis Woolworth’s treatment of black people in 1960.

Sadly, President Trump never said a word about his polite, cheerful supporter being railroaded in Omaha. Gardner had attended Trump’s inauguration with such high hopes. He had well wishes even for the (can we say “insane”?) protesters he encountered there.

Last weekend, facing death threats and a kangaroo court, and with no means to mount a defense, Gardner killed himself, rather than be killed by the mob waiting for him back in Omaha.

This is the part of the column where I make a clarion call for action. How about civil suits against the monsters in the prosecutor’s office, against the criminal-supporting GoFundMe and the Facebook and Twitter defamation mobs! Maybe a Department of Justice investigation or FCC action against biased social media companies. Antitrust suits. Boycotts!

I’ve got nothing. The country has gone mad. I always figured the first armed civilian who ever fought back would put an end to the violence exploding all over the country—the violence that police and prosecutors can’t or won’t stop. “We have the guns,” conservatives like to say. In fact, it’s even worse now.

It’s official: You can’t protect yourself. Not even a blameless ex-Marine could defend himself from being choked to death. The D.A. will call in a “special” prosecutor to throw you to the wolves, and they’ll both be praised for railroading an innocent man in the Omaha World Herald, while the “elite” media defame you.