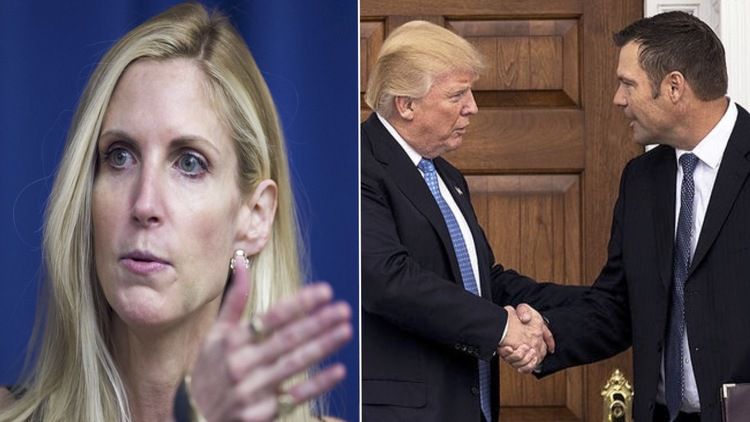 Ann Coulter On Kobach: The Swamp In Action

Everyone else wants the names of the FBI officials who approved the unprecedented law enforcement dragnet against low-level Trump aides in the middle of a presidential campaign.

I want the names of the staffers at the Republican National Committee who prepared Trump’s “backgrounders” on potential hires for the new administration. (I’m not interested in finding out who leaked them because I assume it was the Russians.)

When America is no more, future generations are going to want to know who murdered our country.

Below is a random selection of the idiotic quotes from the RNC’s vetting document [PDF] on Kris Kobach, when President Trump was considering him for secretary of the Department of Homeland Security. Instead of Kobach, who could have saved the country, Trump appointed a series of imbeciles, who managed to engineer the worst immigration crisis in the nation’s history.

If this cretinous document had anything to do with Kobach being passed over, then there are specific people whose names we’re going to need.

The RNC seems to think “hardliner” means: “supports current federal law, on the books, passed over generations by Republicans and Democrats, negotiating compromises and getting their bills signed into law by a series of presidents in both political parties.”

“Would you ever allow your support of policies that ‘strengthen’ immigration enforcement (to) conflict with bipartisan compromise legislation negotiated by a Trump administration?”

Even after Trump won, the RNC proceeded as if nothing had happened and their goal was to pass a new Gang of Eight “Comprehensive Immigration” bill. They wanted Kobach to swear fidelity to a policy that had just been soundly rejected by the voters and their own party.

“Given your history of campaigning on immigration politics, do you believe you have an ability to strike the appropriate tone ...?”

Again, the RNC seems sublimely unaware of the entire 2016 election. Trump called Mexican immigrants rapists and won. But the RNC is worried about an erudite Midwesterner’s “tone.”

“Kobach is credited with helping draft the controversial immigration law allowing Arizona state and local officials to check the immigration status of individuals they stopped ...”

“Controversial” is what idiots say when they don’t have a real complaint.

I can’t be sure about all of them, but by my count, at least 300 of the 400 members of the current Democratic presidential field support slavery reparations, Medicare for all, free college tuition, eliminating I.C.E., transgenders in women’s bathrooms, abortion at 8.9 months, flinging open our borders and providing free dental care to illegals.

But according to the RNC, supporting immigration laws currently on the books is “controversial.”

I note that it wasn’t “controversial” at the Supreme Court.

The morons at the RNC aren’t even familiar with the landmark Supreme Court ruling they’re citing to bash Kobach.

Dear Useless, Incompetent Twits: The law—I mean, the “controversial” law—“allowing Arizona state and local officials to check the immigration status of individuals they stopped” ... was UPHELD BY A UNANIMOUS SUPREME COURT. (Other parts of the law, not mentioned by the RNC or anyone else, were struck down by a divided court with dissents from Trump’s favorite justices: Scalia, Alito and Thomas.)

“Background: Kobach has advocated for use of a technicality within the Patriot Act, that would potentially force Mexico to ‘pay for the wall’ by holding hostage the millions of dollars that Mexican nationals in the U.S. send home to family each year.”

Idea for the RNC’s next policy paper: “The Trump administration advocates for use of a technicality within the law that would potentially force taxpayers to pay for government services by holding hostage trillions of dollars that Americans spend on their families each year.”

The Kobach “backgrounder” is the equivalent of me writing the vetting documents for the Obama administration.

“CONTROVERSIES: Kobach Faced Criticism for Speaking at What Some Called a 'White Nationalist' Conference."

Holy moly! That's a blockbuster! I’ve followed Kobach’s career for years, and I’m floored that the Harvard/Yale/Oxford graduate is consorting with “white supremacists.”

“Kobach was a presenter at a writers workshop last week for The Social Contract Press, a publishing house that the Southern Poverty Law Center includes on its list of hate groups under the category ‘anti-immigrant.’”

Anyone—in media, in politics, in casual conversation around the water cooler, certainly anyone at the RNC!—who cites the SPLC as anything other than “America’s Leading Hate Group” needs to have his head examined. This is on the order of the NAACP using KKK literature to evaluate job applicants.

The RNC vetters are too stupid not to bury the SPLC’s specific claim: that The Social Contract Press is guilty of being “anti-immigrant.” I know the RNC hated Trump, but the only reason the RNC even has a Republican president right now is that a plurality of Americans want less immigration, too.

“During the Campaign, Kobach’s Opponent Tied Him to White Supremacists Groups.”

Again with the “white supremacist groups”!

Guess who this time? Guess! FAIR—the Federation for American Immigration Reform, a group concerned with ... yes, that would be the principal assignment of department for which Kobach was being considered: IMMIGRATION.

In fact, FAIR is a little namby-pamby on immigration, certainly compared to, for example, the Angel Moms, Bernie Sanders circa 2016, or—I don’t know—THE PRESIDENT OF THE UNITED STATES. If FAIR is a “white supremacist group,” then Trump is the Grand Wizard of the KKK.

Who at the RNC wrote this document? I want their names and I want them killed. (Or forced to watch the Democratic debates—their choice.)

More likely, the nitwit responsible for this Swamp Manifesto will be appointed Trump's new DHS Secretary.