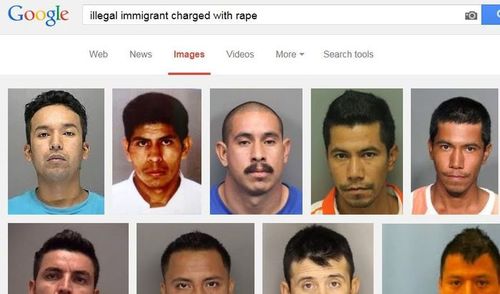 There are few sexual perversions not celebrated by our media today, but I gather, from decades of flood-the-zone coverage of even the most preposterous allegations of rape, that liberals are still on record as being against rape.

So it's worth examining the cultures we're introducing to America for the purpose of giving the Democrats votes and businesses cheap labor:

In all of Western Europe, the United States, Canada, Australia and New Zealand combined, there have been eight reported births to girls aged 10 or younger. Seven of the eight involved Third World immigrants.

By contrast, less than 2 percent of births in the U.S. are to girls in that age group—and most of those are Hispanics, who are seven times more likely to give birth between the ages of 10 and 14 than whites, according to a Centers for Disease Control study.

All peasant cultures exhibit extremely non-progressive views on women and children. Mexico just happens to have the peasant culture that lives within walking distance of the United States.

More than 90 percent of the perpetrators are Hispanic. I didn't know there were that many Hispanics in North Carolina! When not providing North Carolina farmers with cheap labor, immigrant workers seem to spend all their free time raping little girls. (It's a wonder they find the time to do all that drunk driving.)

These websites aren't even counting legal immigrants. It's bad enough that the government can't stop foreign rapists from sneaking into our country. But how about the rapists the government looked over and decided to let in? [VDARE.com Note: The graphic at the top of the page is a screenshot of a Google Image search for the words "illegal immigrant charged with rape." View that here--it will startle you. Of course, from the point of view of the victim of Hispanic rapist, or worse, a Hispanic gang rape, it doesn't really make any difference if the rapist is illegal, in the US on a work visa, or is an anchor baby.]

We'll never know about their criminal predations, to say nothing of their burden on the taxpayers. The government won't tell us, and the media would bury the information if it did.

The cover-up is too relentless to be a coincidence. In February 2014, Carlos Gumercindo Crus, 42, was arrested for committing a felony sex offense on a 12-year-old girl in her home in Lexington, North Carolina. The headline was: "Man, 42, arrested for sexual offense with girl under 13."

Two weeks later, Jose Freddy Ambrosio-Gorgonio, 32, was arrested in Vale, North Carolina, for having sex with a 12-year-old girl. Headline: "Man charged with sexual assault of a minor." This was splashed in small, inside-the-paper items in two local newspapers, below the high school basketball scores.

In 2012, 35-year-old illegal alien Luis Perez-Valencia confessed to raping an 11-year-old girl, after she got pregnant and DNA proved he was the father. Or—as the Star-News in Wilmington, North Carolina, began the story: "Man Pleads Guilty in Child Rape Case. A Brunswick County man was sentenced to up to 20 years in prison Monday for raping and impregnating an 11-year-old girl."

This "man" has been really busy! Why doesn't anyone arrest him?

It's so informative being told that it was a "man" and not, say, an octopus, charged with having sex with a minor. In a surprise move, two local newspapers reported that Perez-Valencia was an illegal alien.

Illegal immigrants are hard-working: One time, Perez-Valencia tried to rape the 11-year-old after taking her to work with him. (It was "Take Your Child Rape Victim to Work Day.")

Even in Hawaii, where the population is only 2.7 percent Mexican, a Mexican child molester pops up. In 2012, 47-year-old Jose Luis Hernandez-Dominguez was sentenced to 10 years in prison for sexually molesting a 5-year-old girl over an extended period, while his wife baby-sat the girl.

But Donald Trump has come under relentless attack because he used the M-word ("Mexican")—and it wasn't to tell us that Mexicans work harder than Americans! He must be destroyed.

Who, exactly, is this media cover-up helping? It's not helping American girls who have no idea they shouldn't be cracking the door open to their parents' landscaper. It's not helping high school sophomores who didn't know the risk of joining their Mexican schoolmates in a courtyard outside the homecoming dance. (See my new book Adios, America for details on these gruesome cases as well as many others.)

It's also not helping any Latinas who immigrated to America, hoping to escape the Latino rape culture. The rapists have followed them here—and are being ferociously defended by well-heeled Americans, who strut around like they're Martin Luther King because they want to pay their landscapers less.

Is Trump the only rich man in America who cares about rape?

not reporting raceDiversity Is Strength
<< Previous
Next >>
LATEST