Friedrich Zauner
A+
|
a-

See earlier by Friedrich Zauner: Is It Too Late For Germany?

This Sunday, September 29, for the second time in two years 6.4 million Austrians will vote a new parliament. The deep political crisis that triggered these new elections came after 17 months of the most popular government this tiny little country in the heart of Europe ever had. It was elected on an anti-immigration wave—and it was destroyed by the Deep State. Sound familiar, Americans? 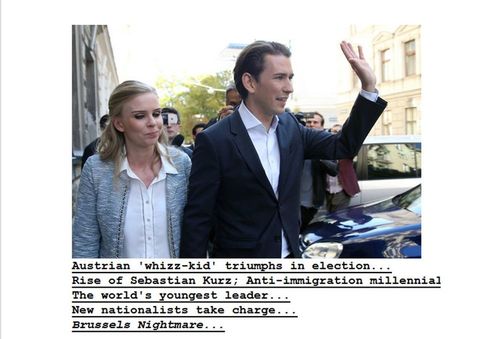 In September 2017 the overwhelming majority of Austrians had voted for the centrist Peoples Party (ÖVP— Österreichische Volkspartei) and the right-wing Freedom Party (FPÖ—Freiheitliche Partei Österreichs), hoping for an immigration crack-down that would control the borders, stop illegal immigration and send back migrants not entitled to asylum. This revolution had been made possible by Sebastian Kurz, the new leader at the helm of the ÖVP. This very young (then 31) and smart former minister for foreign affairs led his party out of coalition with the socialist SPÖ— Sozialdemokratische Partei Österreichs. His party stopped observing the cordon sanitaire isolating the right-wing Freedom Party, a prohibition that has kept the right out of power in much of Europe. This decision to enter a coalition with FPÖ opened the way for an immigration patriot government. For the first time since 2007 a socialist chancellor had to hand over his office to a politician to his right.

Kurz and his vice chancellor, H.C. Strache of the FPÖ, agreed to a program of market reforms and modernization. And, still more important: Austria became the first of the founding European Union member states to adopt an anti-immigration policy similar to that of neighboring Hungary, much to the disgust of German Chancellor Angela Merkel and the EU bureaucrats. The conflict became visible when the Austrian government refused to ratify the United Nations “migration pact.”

Following the Austrian example, Italy took a similar turn a year later and anti-immigration parties everywhere in Europe advanced in national elections. There was real fear that a wave of populism would bury the Open Border strategy promoted by Angela Merkel and her European Union allies.

For Germany’s Merkel, the Austrian example was particularly dangerous because of growing dissent in her own party, the CDU (Christian Democratic Union of Germany). Kurz and his government showed that Merkel was wrong when she said there were no alternative to her policy.

This is the background necessary to understand the Deep State coup that put an end to the coalition between the ÖVP and the FPÖ.

On May 17 of this year, just a week before elections to the European parliament, two left-wing German newspapers, Der Spiegel and Süddeutsche Zeitung, published a video illegally recorded by hidden cameras in a luxurious villa on the Spanish island of Ibiza in 2017, a few weeks before the Austrian elections that brought the ÖVP-FPÖ coalition to power. It showed H.C. Strache, then still the leader of the opposition, and his party colleague Johann Gudenus talking to a gorgeous blonde who had been introduced to them as the niece of a Russian oligarch eager to invest big money in Austria. (A presumably gorgeous blonde—her face is blurred in the image provided.)

Visibly under the influence of alcohol and cocaine, Strache promised her exclusive public contracts in the construction of highways and the participation in the eventual privatization of water. He would help her buy the Kronenzeitung, the biggest and most influential daily paper in Austria. In return the blonde oligarch would finance the Freedom Party using hidden money channels, and she would promote its policy using her power as future owner of the newspaper.

Much of what Strache said was idle boasting. There are demanding rules regulating public tenders and the Kronenzeitung is entirely in private ownership and not Strache’s to give away. But it was a clear signal that Strache is susceptible to corruption.

Allegedly, it was a “Viennese” lawyer named Ramin Mirfakhrai (born in Tehran) who set the trap for Strache and Gudenus. (See the Wikipedia entry on “The Ibiza Affair, and a story from Bild: Viennese Lawyer Admits I'm Behind The Strache Video—His Alleged Motive: "Civil Society Motivated Project," by Paul Ronzheimer, Bild.de, May 24, 2019 [English via Google Translate.])

Despite his alleged motive (VDARE.com readers can translate “civil society” into “ethnic resentment”) the story seems to have been sold to some German organization for a lot of money—$650, 000 US dollars in gold.

Journalistic research by the Kronen Zeitung indicated that "attorney M." had been looking for a potential buyer for two years, before finally selling the video for €600,000 in Krugerrand coins to an organisation based in Germany. According to the research, the role of the Russian oligarch's niece was played by a Bosnian agricultural student, specially cast for the job.[ Staatsanwaltschaft ermittelt in der Causa Ibiza-Video". wienerzeitung.at May 27, 2019.]

But so far the Austrian authorities have done almost nothing to find out what is actually behind the whole affair—rather like the FBI and Hillary Clinton’s private email server. Even the Main Stream Media do not show any particular interest in clearing up the intrigue, although it has the elements of a mini coup d'état. [How a scandal involving a far-right politician brought down Austria’s government, by Alex Ward, Vox.com, Updated May 21, 2019]

Particularly interesting is the question of just why German, as opposed to Austrian, media orchestrated this story, a sensitive subject given the long history of German interference in Austrian internal affairs. As we know now, the video had been offered on the black market and shown to several people. It seems impossible that the secret services of both countries, the German Bundesnachrichtendienst (BND) and the Austrian BVT, did not know what was going on.

The day after the Leftist Austrian public TV channel ÖRF showed the video, Strache and Gudenus stepped down and left the party.

At first, Chancellor Kurz appeared ready to continue his coalition with the Freedom Party. But with thousands of Leftist militants demonstrating in front of the Austrian Parliament Building and under the growing pressure from opponents inside his own ÖVP and from outside the country, Kurz changed his mind. He made more and more demands on his coalition partner culminating in the demand that Herbert Kickl, the very efficient FPÖ minister of home affairs, step down and return the post to the ÖVP, which had held it for 17 years.

At that point all ministers of the Freedom Party left the government. A few days later the FPÖ voted together with the social democrat SPÖ against Kurz and ousted his government.

According to all opinion the the ÖVP will win the elections again.

This spring, Austria's youngest-ever chancellor was felled by a political scandal. But Sebastian Kurz could soon be back at the helm. A majority of Austrian voters seemingly can't wait to have him back.

But it is unclear whether the SPÖ or the FPÖ will be second. There is personal animosity between Kurz and Kickl, but the programmatic similarities between their two parties are so great and their wish to continue the reforms they started so significant that their future cooperation is probable.

Which means Austria will continue to annoy Merkel and the Eurocrats over immigration.

But this does not depend only on the outcome of the elections and the political will of, well, the Austrian people. The Deep State, the opponents of Sebastian Kurz within his own party, and powerful foreign interests, are still in the game.

Friedrich Zauner [Email him] is a writer in Germany.