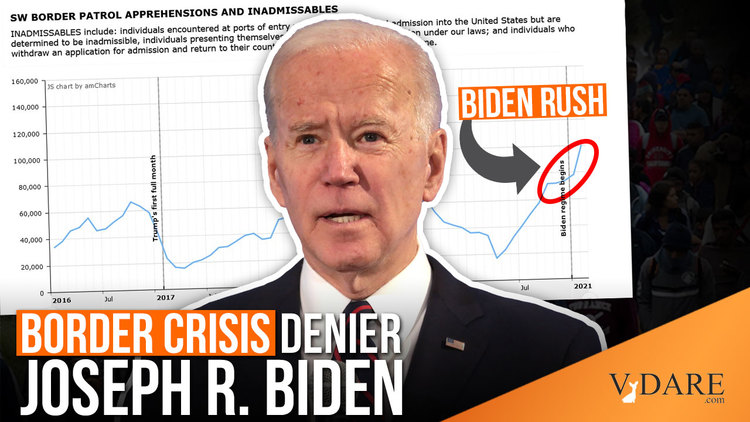 It is now obvious that Homeland Security chief Alejandro Mayorkas, a leftist Cuban-Jewish immigrant, lied about the border rush when he called it merely a “challenge” that was foisted upon the Biden administration by “the cruelty of the last administration” [No 'Crisis,' but DHS Chief Mayorkas Blames Trump Administration for Biden's Border 'Challenge', by Elizabeth Crisp, Newsweek, March 1, 2021]. The “challenge” has merely worsened in the last two weeks, and it is the Biden Regime’s stupid immigration policies, not POTUS 45’s “cruelty,” that are causing the problem.

Let’s look at some numbers:

But most are released to hop buses and head across the country [After Border Patrol release, asylum-seekers test positive for Covid in Brownsville, Texas, by Damià Bonmatí, Noticias Telemundo Investiga and Martha Alicia López, NBC, March 2, 2021]. And these are just the ones who were caught [Number of COVID-positive migrants released in Texas surges, by Greg Norman and Griff Jenkins, Fox News, March 8, 2021].

The illegal-alien totals for the five-months since then are frightening: 396,598. That is almost 90 percent of the total for all of fiscal 2020.

This has left detention facilities, which Biden and every other Democrat condemned as “kids in cages” during the Trump Administration, horribly overcrowded. Some inmates reportedly haven’t seen the sun for days [Lawyers describe overcrowded conditions for children in Border Patrol custody, by Camilo Montoya-Galvez, CBS News, March 12, 2021]. But of course the media cover this development without the angry denunciations they heaped on Trump.

Texas Gov. Greg Abbott has blamed Biden for the disaster. He was immediately met with usual dubious “fact checks” of his point that COVID-positive illegals could spread the virus [Battle emerges between Biden administration and Texas Gov. Greg Abbott over migrant arrivals, COVID-19 testing, by Quinn Owen, ABC News, March 12, 2021]. But note that at a news conference last week, Abbott said the border authorities themselves blame Biden and warned him about the coming disaster. Abbott said:

There is a crisis on the Texas border right now. … This crisis is a result of President Biden’s open-border policies.

Yet the Biden regime is unmoved. It now plans Ellis Island-style “rapid-processing hubs” for all the new undocumented Democrats [Texas family detention centers expected to transform into rapid-processing hubs, by Maria Sacchetti et al., Washington Post, March 4, 2021]. That change is due to what one DHS official believes will be the highest number of minors in “over 20 years.” That same official says that might not be enough to handle the influx, that hotels might have to house the overflow.

And Biden wants to blame Trump for this mess?

The real Biden message was unthinkingly delivered by Mayorkas:

We are not saying don't come. We are saying don’t come now, because we will be able to deliver a safe and orderly process for them as quickly as possible. [Emphasis added]

Migrants: “Why should we wait?”

No wonder “migrants” tell reporters they’re coming to the border because of Biden. Even Mexico is grumbling. “They see him as the migrant president, and so many feel they’re going to reach the United States,” Mexican President Andres Manuel Lopez Obrador said after a recent phone call with Biden [Biden stirs Mexican angst over boom time for gangs, by Dave Graham, Reuters, March 10, 2021].

And at a news conference, “border czar” Roberta Jacobson inadvertently admitted that Abbott is right:

Well, first of all, one of the things I think is important is we’ve seen surges before, surges tend to respond to hope, and there was a significant hope for a more humane policy after four years of, you know pent up demand. So I don’t know whether I would call that a coincidence, but I certainly think the idea that a more humane policy would be in place may have driven people to make that decision. [Emphasis added]

The surge will, of course, worsen as the weather improves. So Biden’s in a pickle. He knows he must open the borders to please his far-Left constituency. But he also knows a massive “migrant” surge is the last thing normal Americans want.

Significantly highlighting Biden’s predicament: his surprising reluctance to lift Trump’s very popular temporary legal immigration moratorium. He has until the end of this month to decide. Yet he had stayed true to his Open Border pledges, he would have revoked it immediately [Biden yet to act on overturning some Trump immigration policies, by Anita Kumar, Politico, March 9, 2021].

Biden and his handlers know the border rush is, in fact, an emergency. That’s why he just sent in the Federal Emergency Management Agency [Biden Administration Directs FEMA to Help Shelter Migrant Children, by Zolan Kanno-Youngs, New York Times, March 14, 2021]. Apparently, it just didn’t occur to them that this would happen. Of course, these are people who believe the Capitol “Insurrection” Hoax.

If the Biden Regime were serious, needless to say, it would allow Border Patrol and Immigration and Customs Enforcement to do their jobs, and restore Trump’s Remain in Mexico policy. But it won’t. The Treason Lobby and rest of the radical Left will deem any border restrictions as “racist” and/or “fascist.” That’s why the Biden Amnesty bill dispensed with any pretense of beefing up border security, unlike all previous Amnesty efforts. The far Left would have gone ballistic at mere thought of it.

Interestingly, it appears the Ruling Class is really afraid of this COVID argument: Big Tech is shutting down discussion of it. Scandalously, Twitter even forced former House Speaker (!) Newt Gingrich to delete a viral tweet about the COVID surge at the border.

Twitter is becoming more aggressive in its censorship. The company locked Newt Gingrich out of his 2.2m-follower account for 'hateful conduct' unless he deleted the tweet seen below. After a week, Gingrich deleted it, sent (futile) protest to Twitter. https://t.co/BwQd4WmgE3 pic.twitter.com/oBgInjaprS

Even some Democrats are among that silent majority. Two Texas Democrats, Representatives Henry Cuellar and Vicente Gonzalez, are begging the Biden Administration to reverse course and restore some of Donald Trumps’ much-maligned policies [Texas Democrat knocks Biden over immigration policy, sending delegation to the state without notice, by Nikolas Lanum, Fox News, March 9, 2021].  Rep. Gonzalez even wants Remain in Mexico to return.

.@RepGonzalez, a Texas Democrat called out @JoeBiden, asking that his admin stop the current flux of migrants and proposed that they process them in their home countries or in #Mexico, instead of incentivizing them to cross U.S. border. #Safe3rdCountry?https://t.co/ZfPrZekwgT

More swing-state Democrats are likely to agree as the crisis worsens.

But the Biden Regime won’t change course, particularly with Alejandro Mayorkas and Merrick Garland guiding policy. It is too committed to Open Borders, even at the cost of the rest of its agenda.  Establishment Democrats are terrified of their hyper-emotional Left—and they have bet the party’s future on the Great Replacement: Electing A New People through immigration policy.

Good thing is, no Congressional Republican will likely agree to any Democratic legislation that doesn’t strengthen border security and restore some of Trump’s policies. Because that’s a non-starter with most Democrats, no Amnesty measure can pass Congress.

Which means, possibly, to a big win for the GOP in 2022—if the party targets the border crisis and offers tough solutions.

If the GOP/GAP can’t (or won’t) exploit that next year, it will live up to the Stupid Party label once again.