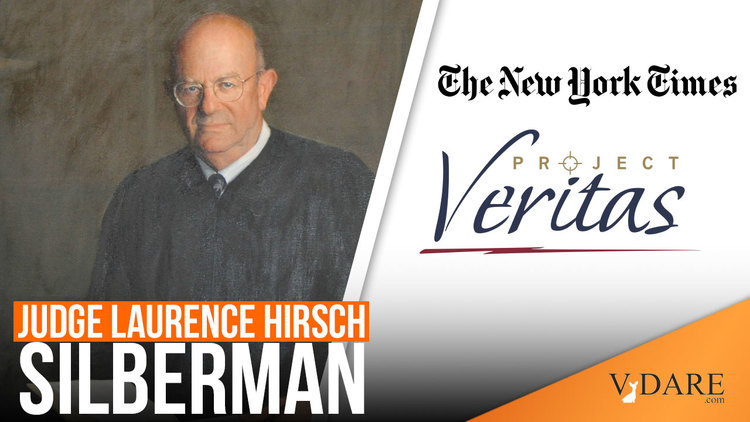 Just before Christmas, I reported that we would be filing an appeal in the case of Brimelow vs. New York Times, our libel action against the New York Times for smearing me as an “open white nationalist” among other things. That appeal was filed; our brief is here. The New York Times responded here; our reply is here.

Significantly, Federal District Court Judge Katherine Polk Failla  found that the New York Times’ smear in the original January 15, 2019 article—that I am an "open white nationalist"—was a factual allegation, and thus potentially libelous. But she then claimed that the New York Times’ later "stealth edit," removing the word “open” (and adding a hyperlink to the discredited CultMarx vigilante gang the Southern Poverty Law Center), provided sufficient "context" to let it off the hook.

In fact, of course, the New York Times still arrogantly refuses to acknowledge this correction in print, despite making such acknowledgements a point of honor in its published code of conduct. So no reader dependent on the hard-copy edition of the newspaper will know it has been made. And the defamation remains, uncorrected, in e.g., the Congressional Record.

When I announced our suit against the New York Times last year, we headlined it The Sin Of Sullivan—a reference to the U.S. Supreme Court’s disastrous 1964 decision in New York Times Co. v. Sullivan, which eventually morphed into a media license to lie about public figures, in dramatic contrast to the situation that had obtained historically in the U.S, and still does in every other Common Law country.

It’s still not widely realized that defendants in libel actions brought by “public figures” in the U.S. now habitually make no effort to defend the truth of what they’ve said. They simply hide behind the enormous fault standard of Sullivan, viz. that they lacked actual knowledge of falsity or reckless disregard of the truth.

American politics are often said to be becoming more extreme and polarized. I argued last year that one reason for this, since Sullivan removed the check of truthfulness, is that political rhetoric has increasingly spun out of control. Extraordinarily dehumanizing accusations, designed to drive the victims out of the public square and to destroy private lives, have become routine. The most obvious victims are patriots and conservatives. But a restored law of libel could (presumably) have done much to halt various much-denounced but apparently unkillable right-wing conspiracy theories, for example that President Obama was born in Kenya, Bill and Hillary Clinton are serial killers or that Democratic officials are engaged in child sex rings.

Still, I wrote last year, there were heartening signs that Sullivan decision is—after nearly sixty years—finally collapsing under the weight of its own contradictions.

In this prediction, at least, I have been vindicated by two subsequent major developments:

Silberman really alarmed the media elite here, as you can tell from Politico’s headline:

But he has added new strength to a debate begun by Justice Thomas. Both Instapundit’s Glenn Reynolds [How to Restore Balance to Libel Law, Wall Street Journal, March 24, 2021] and Alan Dershowitz [Should New York Times v. Sullivan Be Overruled because of The New York Times?, Gatestone Institute, March 24, 2021] have responded with suggested reforms.

This dramatic development is well summarized here: Project Veritas Wins Early Round In Defamation Lawsuit Against New York Times, By Mollie Hemingway, The Federalist, March 22, 2021. A key point is that Judge Charles Wood of the New York State Supreme Court rejected [PDF] the New York Times’ claim that anything factual in its news reports can be defended as merely an expression of opinion.

Needless to say, the New York Times, which has a lot of money, is appealing. But unless this decision is reversed, Project Veritas will now be able to proceed to discovery i.e. get its hands on internal communications between New York Times editors and writers.

Based on my own experience of 40 years in the Main Stream Media, I cannot imagine that the New York Times views this with anything other but dread.

Naturally, I wish that we had prevailed in Federal District Court with the same arguments that worked for Project Veritas in New York State court, and I hope we will prevail on appeal. But Project Veritas’ heroic success, on which I congratulate the heroic James O’Keefe with all my heart, does show that VDARE.com’s crusade is not at all quixotic.

Nevertheless, the next step is still the same: more litigation. I must appeal to you to help us (tax-deductibly, unless and until the Biden Regime cracks down on us) NOW!!!

Litigation is notoriously uncertain. And the political environment is unprecedentedly hostile. I don’t know if we, or Project Veritas, can prevail and reverse the Sullivan License To Lie. But someone must—if American public discourse, and the Historic American Nation, is to survive.