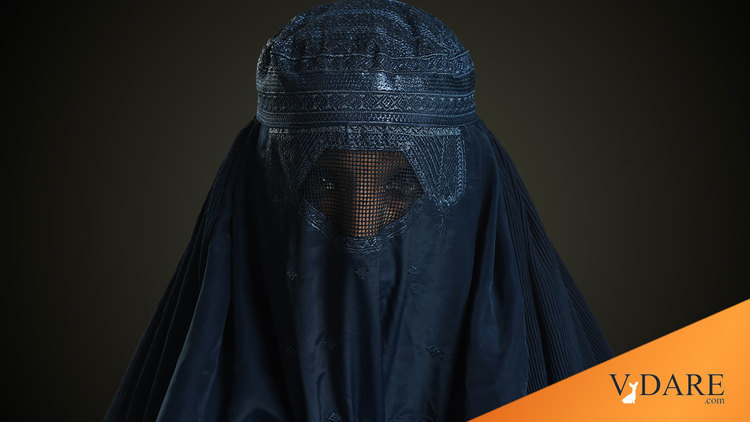 Can The Pentagon Export Feminism To Saudi Arabia?

One of the reasons Osama bin Laden is said to hate the United States is that ever since the Gulf War of 1991, we have maintained military bases in his home country of Saudi Arabia.  The bases are there to protect the Saudis against aggressors like Iraq, but the presence of infidels on the same soil that the Prophet once trod apparently really burns in Osama's bonnet.  Yet there are other reasons why Muslims, by no means as cracked as bin Laden, might not want Americans in their country.

One is that these days an American military presence means women soldiers, and women soldiers threaten the traditional role of women in Saudi society.  Because of that culture clash and the destabilization it could cause, the Defense Department enforces a rule on American servicewomen stationed in Saudi Arabia: Off the base, they have to wear the same head-to-toe gown, called an abaya that Saudi women wear.  They can't drive cars, must sit in the back seat of vehicles and must be escorted by a man at all times.  It's not quite up to Taliban standards, but it's close enough to give most Western women the willies.

Now, the Washington Post reports glowingly, one woman is challenging the Pentagon rule with a lawsuit claiming it violates her constitutional rights. [read original filing in PDF here.]  Air Force Lt. Col. Martha McSally complains that the Pentagon's rule "abandons our American values that we all raised our right hand to die for."

Indeed, she's gained a good deal of support, from conservatives like Sen. Bob Smith of New Hampshire to Eleanor Smeal of the Feminist Majority Foundation.  Miss Smeal simply denounces the Pentagon policy as "gross discrimination," while Mr. Smith explains that "what makes this particularly bizarre is that we are waging a war in Afghanistan to remove those abayas, and the very soldiers who are conducting that war have to cover up." [The Air Force Flier In the Ointment, Washington Post, Jan 7, 2002 ]

Actually, somebody should explain to Mr. Smith that the reason we're fighting a war in Afghanistan has absolutely nothing to do with abolishing women's dress codes; the war has to do with the late unpleasantness of Sept. 11.  As for Col. McSally, what "American values" did she think she was swearing to die for when she signed up?

The reasons for the rule aren't really hard to find.  Its purpose is to avoid offending deeply held Saudi religious and social customs that most Saudis believe are ordained by God.  Americans, men or women, military or civilian, are guests in Saudi Arabia, and one rule of being a guest is that you respect the practices your host demands.  The Constitution, "human rights," and "American values" have little to do with it.  It's called common courtesy.

How would Sen. Smith and the other Republican lawmakers supporting abolition of the Pentagon rule like it if women from primitive Polynesian cultures showed up here wearing the attire, such as it is, customary in their societies?  The ladies would find themselves in the slammer for indecent exposure, and Mr. Smith would be the first to turn the key on them.  The cliché that embalms this particular American value in rhetorical amber is that when in Rome, you do as the Romans do.  If you can't or won't — well, you really don't have to go to Rome at all, do you?

Col. McSally may have had to go to Saudi Arabia, but she didn't have to join the Air Force in the first place.  Maybe that's yet another reason we shouldn't have women in the military anyway.  If the United States is going to insist on being the global policeman and on using women soldiers to do it, we can expect to make ourselves very unwelcome in a lot more non-Western cultures in the future.

What is particularly funny about Col. McSally's crusade is that it's really just part of the perennial self-appointed U.S. mission to make the world safe for American parochialism.  Usually that mission consists in demanding hotels like Holiday Inn and food like what you get at Burger King, but the equivalent of the Whopper in political ideology is the very kind of provincial feminism straight from the boonies of Manhattan that Col. McSally is peddling.

When the Pentagon rule is scrapped, women like the Thoroughly Modern Col. McSally can waltz around downtown Mecca and Riyadh in their bikinis and tank-tops all they want.  When they do, they may find themselves harassed, attacked and even murdered in the streets by Thoroughly Medieval Muslims, and sooner or later they and their allies back home will whine that American soldiers just aren't doing enough to protect the "American values" they represent.

It's clear enough why many Arabs besides Osama bin Laden don't want American troops in Saudi Arabia; it's only Americans like Col. McSally who can't understand it.