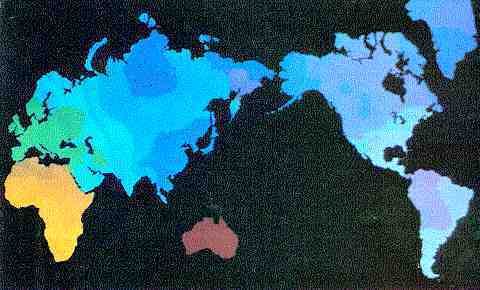 Race is a topic of such enormous importance that it's essential to think clearly about it. Yet much of the intelligentsia now attempts to deal with the problem by defining race as merely a mass hallucination afflicting the entire human race - other than we few members of the Great and the Good. As we saw in last week's column on the schizophrenic writings of the leading population geneticist, Luigi Luca Cavalli-Sforza, much of the professoriat now publicly deny the very reality of race. Prominent anthropologist C. Loring Brace asserts, "There is no such thing as a biological entity that warrants the term 'race.'" The American Association of Physical Anthropologists recently announced: "… old biological concepts of race no longer provide scientifically valid distinctions…" Similarly, the American Anthropological Association proclaimed " … differentiating species into biologically defined 'races' has proven meaningless and unscientific as a way of explaining variation…"

Well, wishing isn't going to make race vanish into thin air. Let's review some of the major myths about race.

If races exist, then one must be supreme.

Much of the Race Does Not Exist cant stems from the following logic (if you can call it logic): "If there really are different racial groups, then one must be The Master Race, which means — oh my God – that Hitler Was Right! Therefore, we must promote whatever ideas most confuse the public about race. Otherwise, they will learn the horrible truth and they'll all vote Nazi."

Look, this is one big non-sequiter: Of course, there are different racial groups. And of course their members tend to inherit certain different genes, on average, than the members of other racial groups. And that means racial groups will differ, on average, in various innate capabilities. But that also means that no group can be supreme at all jobs. To be excellent at one skill frequently implies being worse at something else. So, there can't be a Master Race. Sports fans can cite countless examples. Men of West African descent monopolize the Olympic 100m dash, but their explosive musculature, which is so helpful in sprinting, weighs them down in distance running, where they are also-rans. Similarly, there are far more Samoans in the National Football League than Chinese, simply because Samoans tend to be much, much bigger. But precisely because Samoans are so huge, they'll never do as well as the Chinese in gymnastics.

Every person falls into a single clear-cut racial group.

This one is so silly that I doubt that anybody who has thought about race in the real world for more than ten minutes believes this. Nobody can agree on how many racial groups there are, exactly who is in each one, or what to call them.

Since nobody can agree on how many racial groups there are, exactly who is in each one, or what to call them, then race does not exist.

This one's equally daft. Outside of mathematics, and of human inventions like the law, categories almost always fall across continuous dimensions. Where does "young" end and "old" begin? It all depends on the situation. For example, among female gymnasts, 18 is "old." Among architects, 45 is "young." Yet that does not mean that "age" is meaningless. Further, categories are typically fuzzy. Few people are 100% "sick" or 100% "well." But "health" is still a useful concept.

And what are the boundaries of your various extended families? If the question at hand is who you'd give a spare kidney to, you'd probably draw the limits rather narrowly. But, when making up your Christmas card list, you probably toss in the occasional third cousin, twice removed. And exactly what's the appropriate name for all these extended families anyway?

Genetic differences between the races can't exist because there hasn't been enough time for them to evolve in the 50,000 to 200,000 years since modern humans first emerged from Africa.

The popularity of this argument is bizarre, since genetic differences between the races are written on the faces of the people you see every day. If there wasn't enough time for these racially characteristic traits to evolve, how exactly did they come into existence? Magic? It's particularly amusing to hear paleontologist Stephen Jay Gould assert this since his one major contribution to science has been to document that evolution sometimes occurs at the speed of revolution.

In the History and Geography of Human Genes, Cavalli-Sforza calculates the surprisingly short time in which a version of a gene that leads to more offspring can spread from 1% to 99% of the population. If a rare variant of a gene produces just 1% more surviving offspring, it will become nearly universal in a human group in 11,500 years. But, if it provides 10% more "reproductive fitness," it will come to dominate in just 1,150 years. A classic example is the gene for lactose-tolerance. It was almost nonexistent until humans started milking cattle about 10,000 years ago. Today, its prevalence ranges from negligible among East Asians to 97% among Danes.

Race is only skin deep.

I'm sure this bit of conventional wisdom is most comforting to Jews suffering from Tay-Sachs disease, to blacks enduring sickle cell anemia, and to American Indians battling alcoholism. In reality, there is absolutely nothing that restricts racial differences to "mere cosmetics." Races can differ in any of the ways that families can differ from each other.

Sure, but so what? No single human category can account for a majority of all the many ways humans differ from each other. Try substituting other categories like "age:" "Most variation is within age groups, not between age groups." Yup, that's true, too. But, it doesn't mean that Age Does Not Exist.

You often hear that between-group racial differences only account for 15% of genetic variation. This number comes from a 1972 study by Richard Lewontin of 17 blood types, comparing variation between continental-scale races and between national-scale racial groups (e.g., Swedes vs. Italians). Now, blood types are, I suppose, important, but they hardly represent all we want to know about human genetic diversity. Certain other traits are known to be more racially determined — the figure for skin color, not surprisingly, is 60%. What the overall number is for all the important genes remains unknown.

Still, let's assume that Lewontin's 15% solution is widely applicable. That's like going to a casino that has American Indian and African American croupiers, and 85% of the time the roulette spins are random, but 15% of the time the ball always comes up red for Indian croupiers and black for the black croupiers — pretty useful information, huh?

Most of the human race's genetic variation is among black Africans.

This chestnut is true only for junk genes, the DNA that doesn't do anything. Junk genes are highly useful to population geneticists tracing the genealogies of racial groups, but they don't affect anything in the real world.

Then, are black Africans highly diverse physically? Well, that depends upon who you are lumping together. There are indeed some highly unusual peoples in Africa, but almost none of them were brought to America as slaves. The most genetically distinct people in sub-Saharan Africa are the Khoisan. These are the yellowish-brown, tongue-clicking Bushmen and Hottentots of the Southern African wastelands, the remnants of a great race that once dominated most of Africa before the blacks ethnically cleansed them from the more desirable lands. The most striking contrast in Africa is between the tiny Pygmies and the ultra-tall herding tribes of East Africa. But except for the 7'7", 190-pound basketball novelty Manute Bol, few of either group made it to America. In contrast, the West African tribes that did provide the vast majority of American slaves are relatively homogenous. Cavalli-Sforza sums up the situation on the ground like this, "… differences between most sub-Saharan Africans other than Khoisan and Pygmies seem rather small."

This does not exhaust the list of dumb ideas about race that I've collected. But it does give a taste of how anthropologists try to make race disappear by closing their eyes and wishing. Well, race won't go away, because it's an inevitable outgrowth of family. Our only hope to manage the problems of race is to study it honestly.