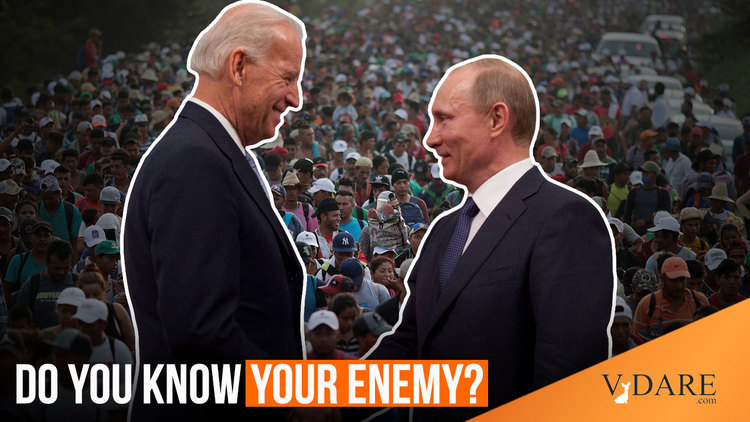 At the same time that the Main Stream Media is berating Americans for not sufficiently rallying to the support of a nationalist regime in Ukraine, it is ignoring or even praising a move by the Biden Administration that essentially strips America of any ability to defend our own borders. The Biden Administration will remove Title 42, a Trump Administration rule designed to keep illegals infected with COVID-19 out of the country. The CDC is also backing this action, a curious move from a body that seemed to want control over the health choices of every American citizen in the country not long ago [CDC Public Health Determination and Termination of Title 42 Order, CDC, April 1, 2022]. The likely result: a border rush that will endanger migrants, Border Patrol officers, American citizens, and what’s left of American identity itself[Bottleneck: The border problems left behind by Title 42, by Rebecca Beitsch and Rafael Bernal, The Hill, April 9, 2022].

The threat’s scale can’t be overestimated. Even The Washington Post, a Regime Media outlet if there ever was one, says officials already dealing with a border rush are preparing for an even bigger surge. Interestingly, much of the immigration wave is not coming from traditional sources in Latin America:

In preparation for a possible post-Title 42 border rush, the Department of Homeland Security has enlisted Federal Emergency Management Administration (FEMA) officials to help prepare for as many as 18,000 migrants per day. That volume would be nearly three times the current pace of arrivals.

When U.S. agents ran out of capacity to hold and process migrants last year, DHS opted to release them from custody, with instructions to self-report to U.S. Immigration and Customs Enforcement later on.

“The nature and scope of migration has changed fundamentally,” said one DHS official, who briefed reporters and spoke on the condition of anonymity under rules set by the department.

The official said an “unprecedented” 40 percent of the migrants being taken into custody are arriving from countries outside Mexico and the Northern Triangle of Guatemala, Honduras and El Salvador that have traditionally been the largest sources for migration.

Out of sheer opportunism, Republicans are talking about the issue, even if they have no intent of following up with strong action upon retaking control. WaPo is even warning the Biden Administration that this is a bad political decision which even some Democrats oppose. (Note also the traditional “Republicans pounce” deflection, which has become something of a meme.)

Top Democrats on Thursday lashed out at the administration and each other over the fate of an emergency order that the Biden and Trump administrations have used to expel undocumented immigrants during the pandemic, with some arguing for a quicker policy change and others warning not to move ahead. Republicans pounced on President Biden, accusing him of inviting chaos and danger.

Court rulings, where actual policy seems to come from these days, also have complicated the Biden Administration’s position [Biden faces intensifying Democratic pressure to discontinue Trump-era border expulsions, by Camilo Montoya-Galvez, CBS, March 10, 2022]. One judicial panel said the Administration can’t expel migrants to “places where they could be persecuted or tortured.” (Disgracefully, this opinion was written by a Trump-appointed judge, Justin Walker) [U.S. can’t expel migrant families to countries where they could be harmed, court rules, by Camilo Montoya-Galvez, March 4, 2022]. Of course, anyone can make up an excuse about being “persecuted.” It’s de-facto Open Borders.

However, in another case, Trump-appointed District Court Judge Mark Pittman ruled children can’t be exempted from the pandemic-expulsion policy [U.S. can’t exempt migrant children from border deportation policy, judge rules, by Camilo Montoya-Galvez, CBSNews, March 4, 2022]. This creates a legal grey zone and an opportunity for the Biden Administration. It can cloak its actions as a response to complicated legal issues. Pushing for more immigration will appease the Leftist  activists that Biden needs to show up in the midterms [Progressive Caucus presses Biden for executive action on student loans, immigration, by Hanna Trudo, The Hill, March 17, 2022].

Senate Republicans just blocked a COVID-19 bill unless there would be a vote to keep the immigration restrictions [GOP blocks COVID bill, demands veto on immigration, by Alan Fram, Associated Press, April 6, 2022]. With a truly stunning display of chutzpah, Chuck Schumer said this was a “devastating vote for every single American who was worried about the possibility of a new variant” and White House Press Secretary Jen Psaki said it was “a step backward for our ability to respond to this virus.” Yet the whole justification for lifting the restrictions is that we apparently don’t need to be worried about admitting infected people into the country anymore. Senator Martin Heinrich (D-NM) went very off message when he said lifting the restrictions was “the right thing to do because you can’t hide behind a pandemic that doesn’t really exist anymore” [Covid deal hampered by GOP opposition to Biden immigration policy, by Burgess Everett and Marianne Levine, Politico, April 5, 2022]

Well, which is it? Is the GOP hampering virus response or was the virus a fake crisis that was used to unfairly exclude immigrants? These narratives can’t both be true. No wonder so many Democrats aren’t even willing to die on this Hill and the GOP sees it as “central” to their plan to retake Congress [Biden’s immigration move divides Democrats as GOP plots election-year strategy, by Melanie Zanona, Manu Raju, and Lauren Fox, CNN, April 5, 2022]

The question is why is the Administration doing this? It is already facing an uphill fight if it wants to keep Congress in the midterms, and the Democrats are out of touch with the public [New polls confirm Democratic problems for November, by Stuart Rothenberg, Roll Call, March 29, 2022]. It splits the Democrats and would suppress American wages, further infuriating workers who have experienced nothing but pain since Biden took over.

Yet there is some logic to the Biden Administration’s strategy. By backing Title 42 removal, the Biden Administration is locking down the non-white racial chauvinists and Leftist activists it will need during the election. If Title 42 is not removed because of Republican opposition, the Biden Administration can congratulate itself on its moral stand, paint the Republicans as heartless, and avoid having to deal with the negative consequences and chaos of more migrant caravans. It’s also potentially dividing the Republican coalition, as pro-business GOP officials are no doubt hearing more pleas for mass immigration from the Chamber of Commerce pleading that there’s a  labor shortage [U.S. Chamber: We Can’t Fill 11.3 Million Open Jobs without More Legal Immigration, USA Chamber of Commerce, March 9, 2022]

Democrats play for keeps and Republicans don’t. While Republicans are focused on eastern Europe, we’re losing our own Southwest.

Having noninterventionist views on the Russian invasion of Ukraine and America’s national interest is not treason. Treason is not enforcing the most fundamental laws of the country. Treason is stripping American citizens of their self-determination and suffrage by replacing them with foreigners. Treason is endangering American lives by importing illegals while crime is skyrocketing and the Biden Administration itself is still telling us COVID-19 is dangerous.

The utter incompatibility of the Biden Administration’s policies at home and the MSM cheerleading of nationalism in Ukraine shows that America’s interests are of no concern to our rulers. If anything, they are deliberately trying to harm us. I’m under no illusions that President Vladimir Putin, President Volodymyr Zelenskyy, or any other foreign leader will be the savior of the Historic American Nation. However, our supposed foreign enemies don’t hate the American people nearly as much as our own rulers.

Still, we should have some hope. The fact even weak Republican Senators are making a stand on this issue is a sign of progress. The supporters of removing Title 42 policies stand revealed as America’s enemies. Perhaps those who fight hardest to keep them in place will show themselves as America’s champions, and set themselves up for greater deeds in 2022, 2024 and beyond.

While most Americans are concerned about economic issues, large minorities of Americans also worry about illegal immigration and the possibility of a terrorist attack [Inflation Dominates Americans’ Economic Concerns in March, by Lydia Saad, Gallup, March 29, 2022]. If a Republican can show that economic, security, and immigration issues are inextricably linked, perhaps a patriotic renewal can begin.

After all, the MSM is saying that nationalism is great if it’s in Ukraine. Perhaps we can finally get a movement going to save our own country. Because if Title 42 policies are lifted, we won’t have one much longer.

James Kirkpatrick [Email him | Tweet him @VDAREJamesK] is a Beltway veteran and a refugee from Conservatism Inc. His latest book is Conservatism Inc.: The Battle for the American Right. Read VDARE.com Editor Peter Brimelow's Preface here.