Demography Is Destiny—In Crimea And In The U.S.

See also: The Enemy Of Ukraine’s Protesters Is Not Necessarily The American Right’s Friend, by Roman Skaskiw 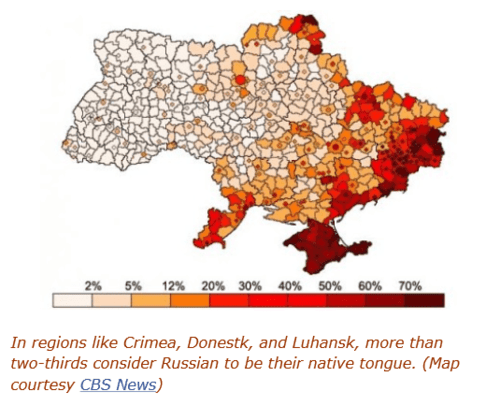 In regions like Crimea, Donestk, and Luhansk, more than two-thirds consider Russian to be their native tongue. (Map courtesy CBS News)

Demography is destiny not just in American politics, but global geopolitics. Mysteriously, the American Main Stream Media is suddenly capable of understanding the consequences of ethnic identity, mass immigration, and demographic displacement—but only when analyzing Politically Incorrect subjects like Putin’s Russia. The true importance of this foreign quarrel, however, is not that we need root for one side or the other in the Ukraine, but rather must understand that the forces at work also apply here—for example, in the rapidly-Mexicanizing American Southwest.

The results are in in from the Crimea. Anywhere from 93 to 95 percent of the voters have chosen to reunite with the Rodina. [Crimeans vote in referendum on whether to break away from Ukraine, join Russia, by Carol Morello, Pamela Constable, and Anthony Faiola, Washington Post, March 16, 2014] While the high percentage may suggest fraud, it may be actually legitimate—after all, as Slate’s Dave Weigel argued, in 2012 Barack Obama quite literally won 100% of the vote in some black districts. [If We Lose, It Was Stolen, by David Weigel, Slate, November 14, 2012]

The MSM has savagely turned on Russia ever since Vladimir Putin imposed restrictions on homosexual activism directed at children, prompting what Steve Sailer has called “World War G.” Thus, the coverage is mostly negative—a startling contrast to the celebratory tone about the secession of Kosovo from Orthodox Serbia.  [The Media’s War Against the Serbs, by Stella Jatras, Antiwar.com, January 15, 2001]

Sen. Ted Cruz offered the subtle geopolitical insight that the situation in the Crimea is a battle of “good vs. evil.” Even Tea Party Republicans seemingly feel it is safer to engage in saber rattling against a nuclear power than give a plain statement of opposition to Amnesty. [“Exclusive: Sen Cruz Describes Ukraine vs. Russia as ‘Good vs. Evil’” by Awr Hawkins, Breitbart, March 6, 2014]

That said, the rationale for President, uh, Mrs. Clinton’s comparison was revealing. She noted that she wanted people to use “historical perspective” because Hitler justified his foreign policy actions on the grounds that he was protecting his countrymen who lived abroad. Analysts great and small are echoing this comparison of the annexation of Crimea to Hitler’s  Anschluss Österreichs of 1938.

The instant comparison to the Führer reflects the deep discomfort the chattering classes of what they insist is a “proposition nation” have with a white nation aggressively defending the interests of its own people abroad—unless, of course, that nation happens to be Israel, where military officials regularly boast of defending their people in Ukraine, France, Thailand, and Georgia. [Gantz: Israel must protect Jews at home, abroad, Jerusalem Post, April 16, 2012]

However, when it comes to discussing the politics of ethnicity that may interfere with Putin’s plans, dogmatically multicultural pundits and reporters become sober and objective. Most stories on the crisis have detailed discussions on the great diversity of the Ukrainian state—and all the problems that engenders. It is constantly reported that Crimea could be expected to rejoin Russia because 60 percent of the population is ethnically Russian. NPR reports that Russia has such a strong influence in Ukraine because so many Russians live there and because of the amount of migration between the two countries:

Millions of Ukrainians work in Russia, and according to the EU-funded Migration Policy Centre, the Russia-Ukraine border is the second-largest migration corridor in the world. (The U.S.-Mexico border is the largest.) [Why Ukraine is such a big deal for Russia, by Krishnadev Calamur, NPR, February 21, 2014]

As with other outlets, CBS helpfully provides detailed maps of the entire nation showing in red which areas speak Russian as their primary tongue, with the Crimea and much of eastern Ukraine a dark crimson. The article adds, “Political differences are less about ideology, and more about identity.” [A Look at Ukraine’s Internal Divisions, by Rebecca Kaplan, CBS News, March 5, 2014]

Even more significant: the trendy MSM campaign in defense of the Crimean Tatars.

After the conquest by the Mongol Golden Horde, a Crimean Khanate was eventually established, which was eventually absorbed by the Russian Empire in the 1700’s. In World War II, the Tatars were devastated by the forced deportation of the entire community by Joseph Stalin, who sought to replace them with more politically reliable Russians. Though many have returned after the collapse of the USSR, only about 13% of the population of Crimea is now Tartar. They have no love for Russia and mostly boycotted the elections. [Many Crimean Tatars Boycott Voting, by Philip Shishkin and Anton Troianovski, Wall Street Journal, March 16, 2014]

The Crimean Khanate was notorious for its mass enslavement of captured Russians. But it is now enjoying a renaissance among SWPL reporters who are in mourning for Crimea’s “original people.” Luke Harding at The Guardian lectures, “Spare a thought, meanwhile, for Crimea's Tartars. They are the peninsula's original Turkic-speaking Muslim inhabitants.” [“Crimean coup is payback by Putin for Ukraine’s revolution,” February 28, 2014] Just after the Russian takeover, Joshua Keating at Slate bemoaned “The Biggest Victims of Today’s Events: The Crimean Tatars” [March 1, 2014] Andrew Sullivan approvingly quoted financier Ben Goldsmith: “Think of the forgotten Tartars, Crimea's original people. Oppressed, exiled, flooded with Russians, they're now just 12% of the population.” [ Who are the Tatars?  The Dish, March 2, 2014] But only a few weeks earlier, Sullivan had no qualms about publishing a letter that read,

Rather than asking “Why can’t they just learn English?”, we should be asking “On what moral and ethical basis can we exclude anyone from migrating to our country?” As long as the people in question are acting in good faith, and want to come to America with the intention of working and securing a better future for their family, what right do we have to refuse them? [What Should We Expect From Immigrants?, The Dish, February 13, 2014]

The point of immigration restriction, sovereignty, and having a country to begin with is for a group to exercise control over its own destiny. A nation-state is the political expression of a particular people. When a people has no identification with a state, or when they associate a state with a different people, you get conflict, as we see in the rapidly-dissolving polity of Ukraine. A group that loses control over the state is at the mercy of others—as the Tatars are today.

And so too is the historic American nation—oppressed by contemptuous rulers, looted by sneering oligarchs lusting for cheap labor, morally attacked every day by pundits and “activists” who deny that white Americans are a people with legitimate collective interests. Like Stalin with the Tatars, our elites flood and overwhelm us with a new people they see as more politically reliable. Just as the Tatars lost the Crimea, so too are Americans losing the country they created.

Of course, there’s a difference. Russian conquest of the Crimea gave a new birth to Orthodox civilization and arguably expanded the reach of the West. But loss of control over the U.S. by the historic American nation will mean the degeneration of the world’s sole superpower into a cacophonous Affirmative Action swamp.

And it is easy to imagine that collapse beginning with an “American Crimea” in the Southwest not long from now. After all, the Southwest once belonged to Mexico, as the Crimea belonged to Russia before it was given to Ukraine. The immigrant Mexican population apparently can’t even stomach the sight of American flags in public schools without resorting to violence—and the federal government sides with the invaders.

A few decades from now (if not sooner), what do you think the results of a referendum in Southern California would be?

Needless to say, any suggestion that demographic change in the American Southwest may lead to our own Crimean situation will be either dismissed as conspiratorial or attacked as “racist.” But ignoring the facts doesn’t make them go away.

Establishment conservatives intellectuals love to talk about American Exceptionalism—but the Gods of the Copybook Headings are not stayed by wishful thinking.  The End of History is being replaced by the Age of Ethnopolitics—and the headlines in Sevastopol may herald what’s coming to Los Angeles.

It used to be said that politics stops at the water’s edge. Now it seems, only logic does.