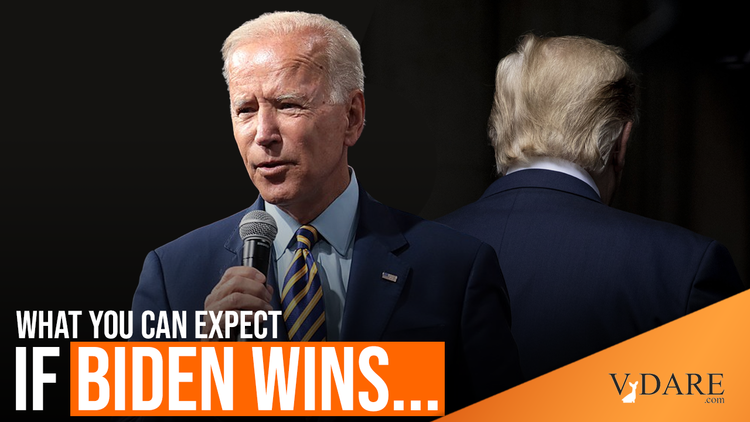 The Dem/Main Stream Media complex proclaims that President Donald Trump is a threat to “our democracy,” but we must frankly recognize that they are planning in plain sight to eliminate self-government for the Historic American Nation—basically, American whites [Democrats ready to take down the system with a sweep in November, by Daniel Oliver, Washington Times, September 3, 2020]. Proposed institutional changes would mean that what Steve Sailer calls “The Coalition of the Fringes” would in effect enslave what he calls “The Core.” (VDARE.com Editor Peter Brimelow calls the division “Anti-America” vs. “America.”) Other laws would intensify America’s already existing “soft” totalitarianism. Like him or not, Trump is right when he warns that this is the most important election in American history [Trump calls delegates ‘incredible warriors’ at 2020 Republican National Convention, by Ebony Bowden, New York Post, August 24, 2020]. We should not be in this position after the GOP sweep in 2016. But it was squandered, and here we are again.

In 2016, the Left was caught napping. It won’t be this time. The last four years have been one long counter-insurgency by the MSM, tech companies, and Democrats to squelch independent voices. We already know from leaked video from Google that the company manipulates search results for political ends. Many of the influential social media accounts that helped President Trump’s narrow victory have been purged pre-emptively. Even basic financial services for patriots are being cut off (which is why we’re suing PayPal). Incredibly, even after Laura Loomer won the primary and became the GOP candidate in Florida’s 21st congressional district, she still wasn’t allowed back on social media. This is clearly far more serious election interference than a few alleged Russian troll accounts. It would be more honest if we just let the tech companies pick the winners.

If victorious, Democrats will probably do some or all of the following.

Another proposal: an “anti-racist amendment” to the Constitution that would allow the government punish any racial inequality, which would automatically be evidence of “racist policy.” Given that we never have equal outcomes in multiracial societies, this would mean virtually every social interaction would become a potential federal case.

This may sound fringe—like gay marriage in 2004—but Twitter’s Jack Dorsey just gave Ibram Kendi, the man who proposed this, $10 million.

Consider the repressive regime that would likely follow. As this is written, we’ve had months of continuous riots in some cities. Yet the Department of Homeland Security apparently believes “white supremacy” is the true threat [White supremacy is the ‘most lethal threat’ to the US, DHS draft assessment says, by Geneva Sands, CNN, September 8, 2020]. Of course, if it were “white supremacists” rioting, the military would have already turned Portland into Dresden—or Charlottesville writ large. The real purpose of such reports: to justify future government censorship and the passage of a “domestic terrorism” law [How a new administration might better fight white supremacist violence, by Daniel Byman, Brookings Institute, August 11, 2020].

Needless to say, this would not apply to Black Lives Matter. But being thrown in prison for what you say or who you know would become a real possibility for many Americans.

The “Russian disinformation” Narrative set a precedent for labeling certain speech illegitimate or a threat to national security. Joe Biden already wants to punish Big Tech for not censoring enough. Obviously, tax exemptions for nonprofits journalists don’t like, including most patriotic organizations and traditional churches, would go. Democrats already have declared their intension to use “red flag” laws to deprive their political opponents of guns. Already, you face far more severe consequences, including death, for saying “all lives matter” than for praising the murder of conservatives.

Free speech as we have known it—as our founders insisted was the natural bedrock of political rights, without which self-government is impossible—will not survive coming leftist rule. The playbook is already being expanded to banking and credit. To be on the wrong side of elite-woke opinion increasingly is to find yourself locked out of the financial system: no bank account, no credit card, no ability to get a loan, or pay a mortgage. Pay cash? The move to a “cashless society”—purely to prevent drug lords and Russian spies from laundering money, you understand—will obviate that option right quick.

The groundwork for the “crisis” that would justify such measures is already being laid [Looking From The Left, ZMan, September 8, 2020]. The Washington Post is publishing fan fiction about President Trump refusing to concede the election [What’s the worst that could happen? by Rosa Brooks, September 3, 2020] Yet in fact it’s Hillary Clinton who has said Joe Biden should not concede “under any circumstances” [Hillary Clinton says Biden should not concede the election ‘under any circumstances,‘ by Rebecca Shabad, NBC News, August 26, 2020].

So it’s a win-win for the Left: if Biden wins, firm measures will be needed to prevent President Trump from illegitimate “clinging” to power. If President Trump wins, the election was stolen by Russians and racists.

The biggest radicalizer: the MSM. You can’t tell people for years that they are living under a traitorous, fascist, or Nazi regime without some people believing it. If Trump somehow pulls it off (again), many people won’t accept it and there could be disastrous consequences.

Would conservatives fight back against a Democratic regime’s abuses of power? That’s uncertain. Even something as controlled and co-opted as the Tea Party would be difficult.

Besides, Conservatism Inc. would be delighted to be rid of Trump and go back to wringing its hands about the budget deficit. But there are deeper issues at stake than the deficit.

Of course, there’s one enormous problem with all this. This isn’t “Joe Biden’s America,” it’s Trump’s.

“Optimism is cowardice,” said Oswald Spengler. The Trump Administration’s real value was not in what it did or didn’t do, but in removing illusions. We now see the MSM, the Deep State, and Big Tech for what they are.

A Trump victory in 2020 would at least buy time. But the truth is that whoever wins, patriots’ actions need to be the same. They have to be building institutions that are outside Conservatism Inc. Rather than hoping for a savior from above, we need to building power from below—even if that means physically relocating to areas where this is still possible. Rather than waiting for the Trump DOJ to arrest antifa, we need to be the ones launching court battles, ensuring legal defenses, and building our own financial networks and support systems.

It’s not fair and it’s frustrating that we have to operate like conquered peasants in what was once our own country. Living amidst the hypocrisy, repression, and sanctimonious lying can be soul-crushing. However, admitting that we are under occupation is the first step to doing something about it.