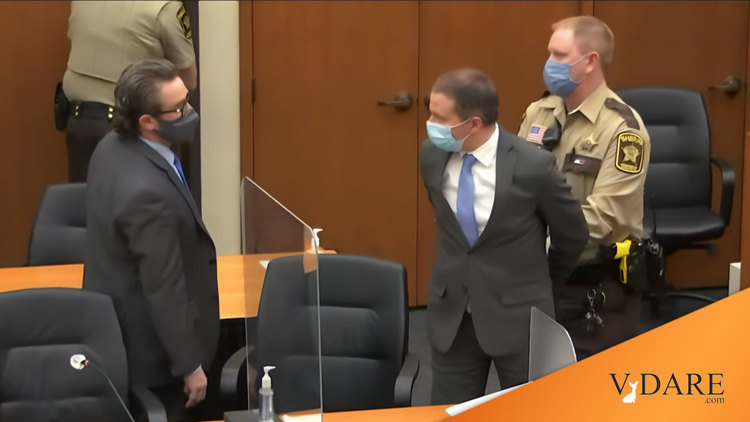 Earlier, May 30, 2020: Even Right Abandoning Accused Minneapolis Cop—But They Shouldn't

The jury has found Derek Chauvin guilty on all three counts. It took fewer than 24 hours to reach a unanimous decision. I have argued all along that an acquittal was impossible, no matter what the evidence showed. No jury, anywhere in the United States, could have found Mr. Chauvin innocent after nearly a year of riots.

I had some hope that the jury might acquit on one or two of the more serious charges, but the guilty verdict was announced first on the most serious of the three, so the other two verdicts were inevitable. Under Minnesota law, Mr. Chauvin will be sentenced under only the most serious charge. It carries a maximum sentence of 40 years, but according to state guidelines, a first offence is supposed to get 12-1/2 years. Judge Peter Cahill said he would pass sentence eight weeks from now.

As the verdicts were read, the camera closed in on Mr. Chauvin for the first time since the trial began. He was wearing a mask, but appeared to show no emotion. He was led from the courtroom in handcuffs and will remain in custody.

Floyd’s death stirred worldwide protests against racism after video showed Chauvin pinning Floyd to the ground with his knee on his neck.https://t.co/GQ1mrcMFHZ

Crowds had gathered in various places in Minneapolis to wait for the verdict. They wept, rejoiced, and fell into each other’s arms.

There are solid grounds to appeal the verdict. From the start, Mr. Chauvin’s lawyer, Eric Nelson, argued that it would be impossible to get a fair trial in Minneapolis because of the rioting and massive publicity. The judged refused to move the trial. Mr. Nelson will probably argue that there was prosecutorial misconduct. In closing arguments, the prosecution said that the defense’s arguments were “nonsense,” that Mr. Nelson was “shading the truth,” “misrepresenting facts,” putting words in witnesses’ mouths, and “creating Halloween stories.” Judge Cahill ruled that he had sufficiently admonished the prosecution for this.

Mr. Nelson will certainly appeal and call for a mistrial on grounds that the jury should have be sequestered—shut off from any outside information about the case—right from the start. His call for sequestration was denied, and later events supported his argument that media coverage and other events would put great pressure on jurors to convict.

There were days of demonstrations and rioting after a white policewoman shot a black criminal to death just 10 miles away from the courthouse, in Brooklyn Center, Minnesota. This was how the country was going to react if blacks and leftist whites thought the jury let Mr. Chauvin off too lightly.

Over the weekend, black Congresswoman Maxine Waters had flown to Minneapolis and told a crowd of demonstrators:

We’ve got to not only stay in the street, but we’ve got to fight for justice. But I am very hopeful and I hope that we’re going to get a verdict that will say, ‘Guilty. Guilty, guilty’. . . . I don’t know whether it’s in the first degree, but as far as I’m concerned, it’s first-degree murder . . . . We’ve got to get more confrontational. We’ve got to make sure that they know that we mean business.

That sent hundreds of people marching through Minneapolis waving Black Lives Matter flags and carrying signs that read “Blue Lives Murder.” As Eric Nelson argued to the judge, this would intimidate any juror, and it happened before the panel was sequestered for deliberation. Judge Cahill refused to declare a mistrial on the spot, but agreed that the congresswoman may have given Mr. Nelson serious grounds for appeal:

I’m aware that Congresswoman Waters was talking . . . about the unacceptability of anything less than a murder conviction, and talk about being confrontational. . . . I wish elected officials would stop talking about this case, especially in a manner that is disrespectful to the rule of law and to the judicial branch and our function. I think if they want to give their opinions, they should do so . . . in a manner that is consistent with their oath to the Constitution . . . . Their failure to do so is abhorrent.

When Miss Waters was pressed on this point later by CNN, she replied with “dindu nothin’ ” aplomb: “The judge says my words don’t matter.” Congressional Republicans called for a vote of censure, but were defeated 216-210 by Democrats.

I suspect the defense appeals will fail, whatever their merits, just as the jury was sure to convict whatever the arguments. Appellate court justices watch TV, too. I predict Mr. Chauvin will spend at least 12 years in prison.

President Joe Biden waited until the jury was sequestered to echo Congresswoman Waters, saying he was “praying for the right” outcome, claiming that the evidence against Mr. Chauvin was “overwhelming.” He said he has become friends with George Floyd’s brother Philonise and the rest of the family, adding that he could “only imagine the pressure and anxiety they’re feeling.” Not a word, of course, about the pressure and anxiety Mr. Chauvin might be feeling.

Philonise reported that the President had called him for a nice chat after the case went to the jury, adding that they looked forward to guilty verdicts. “Hopefully it will be the way the world wants to see it,” he said.

With those words, Philonise put his finger on the problem: The whole world had decided Mr. Chauvin was guilty before the trial even began, and it was clear there would be mayhem if the jury didn’t agree. There were 3,000 National Guardsmen on patrol in Minneapolis, along with thousands of policemen, just in case the lynch mob didn’t get its way.

The jury had to find Derek Chauvin guilty beyond a reasonable doubt. You can read the judge’s instructions to the jury here. Did the prosecution really prove beyond a reasonable doubt that Mr. Chauvin “intentionally inflicted substantial bodily harm”? That he was “perpetrating an act eminently dangerous to others and evincing a depraved mind [emphasis added], without regard for human life”? That he “consciously [took] chances of causing death or great bodily harm”? Was this “[un]reasonable force in the line of duty in effecting a lawful arrest or preventing an escape from custody”? I wasn’t in the courtroom, so I can’t answer these questions, but it is well beyond a reasonable doubt that there was tremendous pressure to convict.

This is how “justice” works in the age of Black Lives Matter. The media whoop up an ambiguous encounter between a white cop and a black criminal to the point that the whole world thinks this is Emmett Till all over again. Half the country goes into paroxysm of rage and violence, while our rotten elites donate billions of dollars to black causes, obediently takes down monuments to white people, and vows to scour everything from math and music theory to our very souls for “white supremacy.”

How could anyone expect a jury to be fair to Derek Chauvin? And what does it say about a country when it has to mobilize thousands of men with rifles to keep the peace in case a duly empaneled jury does not deliver the verdict Philonise wants? The jurors listened to two weeks of testimony. The lynch mob—and the media—saw a few snatches of video, but they knew better. They always know better if knowing better puts the white man in the wrong. This is perversion of justice.

Some people will argue that it’s better for one unlucky cop to do hard time than for justice to be done, if justice means looting and arson. That means accepting perversion of justice. That means recognizing that justice is impossible once the lynch mob begins to howl. And whenever there’s a way to hurt the white man, it will howl.