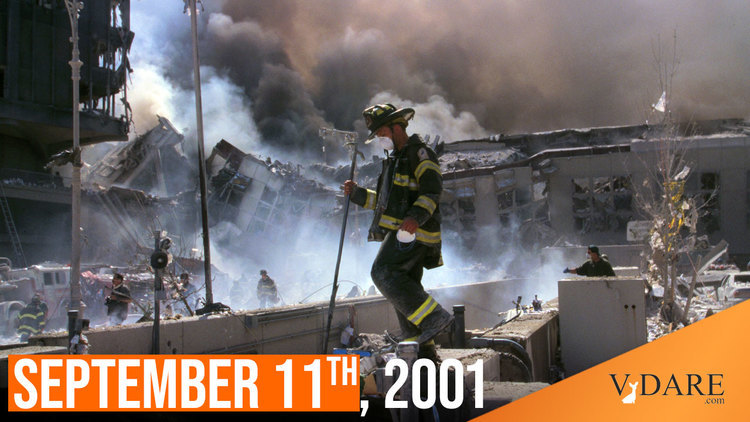 It is no longer news that statues of real, white American heroes are being removed from public places and images of fake, non-white non-heroes being erected. The totalitarian reconstruction of culture, including the historical past, has now become commonplace. Nevertheless, the reasons offered by those waging the cultural and racial warfare remain interesting, if only because they are now revealing what the enemies of the West think they can get away with.

In Brooklyn, New York, the culture war has escalated to a new level. First, a statue of three white firemen who raised an American flag at the site of the World Trade Center was to have been changed to reflect the racial "diversity" of those who died at the site. The original point was to commemorate the firemen who raised the flag, who were white, not the victims of the terrorist attack. The real point, of course, has nothing to do with the World Trade Center or anyone who died there. The real point is simply to erect an icon to "diversity" itself.

Second, in Brooklyn also, the borough president, Marty Markowitz, wants to get rid of a portrait of George Washington long displayed in the Borough Hall and replace it with a portrait of a black or a woman. It's not that Mr. Markowitz dislikes Washington or denounces him as a slaveowner, a racist or any of the other fabricated sins of the day. "There has to be a recognition that this is 2002," he explains. "There's not one picture of a person of color, not one kid, not one Latin. Borough Hall should reflect the richness of our diversity."

There you go again.

Then there's Virginia, which for the last few years has enjoyed a little jihad of its own against its Southern, white and Confederate past. In Richmond, pictures of Robert E. Lee have been removed or defaced, bridges named after Confederate generals have been renamed and so on. Now, having wiped the local slates clean of the Confederacy, the jihad is turning its attentions to other targets. The new crusade in Newport News is to change the name of a local park now known as King-Lincoln Park, after Martin Luther King Jr. and Abraham Lincoln, to just plain old King Park, after you-know-who.

As in Brooklyn, the agenda in Newport News becomes a bit more clear now. The agenda in Newport News has nothing whatsoever to do with the Confederacy, the South, slavery, white supremacy, or any of the other banners under which the revolution has been marching. Abraham Lincoln, whatever he really said and thought about race, remains a hero of egalitarianism and has nothing whatsoever to do with the Old South or those who fought for it or ruled it. Indeed, his main legacy is that he was the chief destroyer of the Old South, but that still doesn't keep his name on the park.

The problem with Lincoln is simply that he's white, which in Brooklyn is what's wrong with Washington and the statues of the firemen. The local head of the NAACP, who opposes changing the park's name, nevertheless explains why there's a movement to change it. "Although Abraham Lincoln is attached to African-Americans because he signed the Emancipation Proclamation, what's ours is ours."

"Us," of course, is blacks and most definitely not whites. Having become a majority of the population in Newport News, blacks now have decided that it is "their" city and not that of whites or any other race. "When you change the name of something it can change the meaning," says the NAACP chief. Just so. What is being created by changing the name of the park is a new racial hegemony. What else besides political and cultural power will whites lose once the racial jihad has completed its campaign?

The racial and cultural revolution that Americans are witnessing and experiencing used to pretend that names had to be changed, statues removed, flags torn down, and songs not sung because they were all symbols of "oppression," "exploitation," "hatred," or just plain "insensitivity."

Today the revolution has gained sufficient confidence in its own power and succeeded in subverting the confidence of its critics (it seems not to have any enemies anymore) that it no longer has to pretend. Today it begins to march under its real banner of race and racial solidarity.

Where that march will end is anyone's guess, but you can bet it won't be in the "equality," "harmony," "tolerance," and "freedom" the revolution spouted in its beginnings.

It's a commonplace that all revolutions become more radical and more extreme as they move along and gather power, and it's most unlikely that the racial revolution in America is anywhere close to being over.