More 100,000 Indians roared for President Trump when he spoke alongside India’s Prime Minister Nareendra Modi last week [Trump dazzled by 'stunning display of India's culture and kindness' at welcome rally, by Courtney Subramanian, USA Today, February 23, 2020]. The meeting was Trump’s second with Modi in six months, the first being at a rally in Houston, Texas. Of course, Trump wants good relations with India, but he’s also angling, foolishly, for the Indian-American vote in 2020. Unfortunately, this pandering means he might just back a bill that would give more green cards to Indian immigrants. That would be catastrophic for the American workers who elected him in 2016.

Trump seems to have   a particular affection for Indians. He has long done business with them here and in India. He called Indians a “very, very special people” in a November 13, 2018 tweet celebrating a Hindu holiday. He courted the Indian vote in 2016 and even released ads in Hindi. “The Indian and Hindu community will have a true friend in the White House, that I can guarantee,” he said at one event. Needless to say, this earnest courtship didn’t end in electoral nuptials: More than 80 percent of Indians jilted him for Hillary Clinton [Very Special People, by Meena Venkataramanan, Harvard Political Review, June 26, 2019].

Why might that be? Sixty-two percent of Indians identify as Democrats [2018 Asian American Voter Survey, Civic Leadership USA]. And they lean to the Left on nearly every issue of importance to the Historic American Nation. Sixty-five percent of Indians support Amnesty for illegal aliens, 60 percent believe states should issue drivers’ licenses to illegals, 65 percent have a favorable view of Black Lives Matter, and 55 percent say the visa backlog is a serious issue [2016 Post-Election National Asian American Survey, by Karthick Ramakrishnan, Janelle Wong, Jennifer Lee, and Taeku Lee, May 16, 2017]. Asian-Americans in general overwhelmingly favor stricter gun control by a 7-to-1 margin, the 2018 Asian American Voter Survey showed; 84 percent of Indians would grab your gun given the chance.

“Guns, that is the most pressing issue for me,” said Vijay Katkuri, 38, a software engineer from southern India, explaining why he voted for a Democratic challenger on Tuesday. “There are lots of other issues, but you can only fix them if you are alive.” https://t.co/QAa0sendYQ

Of course, most Indian-American politicians are hard Leftists. Every U.S. congressman of Indian descent is a Democrat. Two of the most high-profile: Ro Khanna of California and Pramila Jayapal of Washington. Both are far-Left progressives who support Bernie Sanders and Open Borders. Khanna and Jayapal are co-sponsors of the New Way Forward Act, which would decriminalize illegal immigration and make immigration enforcement all but impossible. Jayapal, an immigrant herself, has bragged that she subverted immigration law to help “refugees” from Central America apply for asylum.

Other Indian Democrats are California-born Ami Bera, the child of immigrants who represents California’s 7th District, and Raja Krishnamoorthi, who was born in New Delhi and represents Illinois-8.

Nor is the Indian attachment to the Democrat Party new. The first Indian elected to Congress, Punjabi Sikh Dalip Singh Saund, was a Democrat who represented California-28 from 1957 to 1963.

Yet Trump still loves these Indians. He’s hired more than two dozen for top jobs and is on pace to break Barack Obama’s record of Indian appointments [Donald Trump praises 'incredible' role played by Indian-Americans in his administration, Times of India, November 14, 2018]. They include  Nikki Haley, the former governor of South Carolina (where she removed the Confederate Flag from a State Capitol memorial) and Trump’s envoy to the United Nations, Ajit Pai, Medicare and Medicaid Services Administrator Seema Verma, and former deputy press secretary Raj Shah.

Still, Trump seems to believe that appearances with Modi, tax cuts, differentiating illegal from legal immigration, and, importantly, criticizing Islam, will invite Hindu votes at the polls November. Many Hindus hate Muslims and some groups praised his travel ban on predominately Muslim nations. And they certainly like Trump’s refusal to condemn Modi’s nationalism and anti-Muslim policies [At a rally like no other, Trump woos Indian American voters ahead of 2020, by Anita Kumar, Politico, September 22, 2019].

But Indian-American politicians are confident these tactics won’t work. They claim Indians are committed to helping their fellow Indian immigrants and non-whites in general.

“It’s the Gandhian philosophy of pluralism, of respect for fellow human beings, of dialogue for peace that define the values of the Indian American community,” Khanna said after Trump’s Houston rally with Modi. “The president is misinformed if he thinks showing up at this rally is going to help him with the Indian American vote.”

.@RoKhanna points out that 80% of our Indian-American brothers & sisters oppose Trump despite this Houston Trump/ Modi rally pic.twitter.com/RyLU4V8GpG

“I believe the Indian American community will overwhelming[ly] reject Donald Trump because his anti-immigrant rhetoric and policies run completely counter to our community’s story in America,” Chaudhuri told Politico’s Kumar.

“Not only are they immigrants, but also, they are brown-skinned, often in minority religions and discriminated in society in various ways,” Ramakrishnan, director of the Asian American Voters Survey at the University of California, told NPR this month. “So, yes, people could try to drive a wedge between Indian Americans and other immigrant communities, but the reality of racial discrimination in the United States makes it more difficult” [One Group Whose Political Leanings May Be Changing: Indian Americans Who Are Hindu, by Tom Gjelten, NPR, February 22, 2020].

On that note, here’s another datum from Ramakrishnan’s election report to put the Indian vote in perspective: Indians are most likely among Asians to claim employment discrimination in hiring and firing, [p. 37-38] and to suffer the injustice of name mispronunciation.[p. 48] 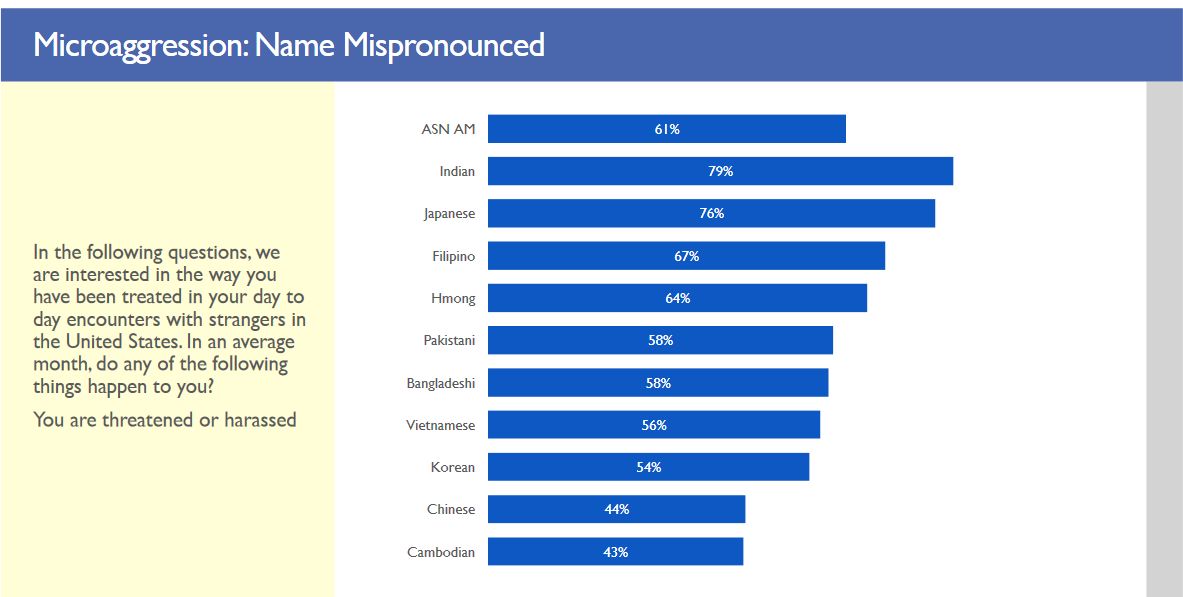 In other words, Indian-Americans are a natural part of the Democrats’ anti-white fringe coalition of self-proclaimed victims.

The president knows that Indian immigrants are more loyal to their homeland than to America. Why else would he think a foreign leader gets him votes in America? Oddly enough, though, this approach will only help him with less assimilated Indians.

That’s because Asians in general are more likely to vote Democrat if they were born in America and speak English well [New results—AALDEF 2018 exit poll of 8,058 Asian American voters, by Asian American Legal and Defense Education Fund, December 26, 2018]. Twenty-six percent of foreign-born Asian-Americans approve of Trump, while only 7 percent of American-born Asians approve of Trump. Thirty-five percent of Asian-Americans with limited English proficiency support Trump, but only 15 percent of fluent English speakers support him.

So will Trump shape his immigration policy around Indian demands and support Senator Mike Lee’s Fairness for High-Skilled Immigrants Act (FHSIA)—which should really be called the Indian Overclass Importation bill?.

Recall what this atrocious bill would do: Scrap country caps on visas, which prevent certain nationalities monopolizing visas and overwhelming our immigration system. Under current law, one nationality is limited to 7 percent of visas allocated annually. By eliminating that ceiling, FHSIA would permit Indians to gobble up more than 90 percent of professional employment green cards for the next 10 years because so many are here already on “temporary” H1B visas, waiting to become permanent residents.

The Indian ethnic lobby strongly backs the bill and is pushing Republicans to support it. Like Mexico and Central America, India benefits immensely from immigration because remittances are nearly 3 percent of its GDP.

Of course, Big Tech will benefit, too. About 71 percent of Silicon Valley’s workforce is foreign-born. If FHSIA passes, Big Tech can obtain even more cheap foreign labor rather than hiring actual Americans.

The people who will lose the most are high-skilled American workers, the communities in which Indians settle, and, of course, the GOP. Indians have transformed many of the communities they live in—and not for the better. Many suburbs of Seattle now resemble South Asian colonies, with Indians occupying entire classrooms and apartment complexes. Towns such as Redmond, Washington used to be Republican strongholds. Thanks to Indians, these suburbs now elect far-Left Democrats.

If FHSIA passes, those communities will spread like coronavirus—a contagion that invites this observation about Indians: A strikingly high number commit medical fraud. So they steal not only jobs but also benefits.

Trump should stop wasting his time. He’ll get more votes if he stands with American workers against the agenda of this ethnic lobby imported by the disastrous 1965 Immigration Act—whose proportion of the U.S. population, by a pleasing coincidence, now amounts to a literal “one percent,” just like the financial elite that the Left claims is running the country.