Donald Trump, Kennedy Democrats, And The Ghost Of Jimmy Hoffa 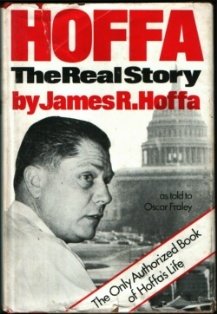 It seems like forever since I have seen such excitement and HOPE in blue collar Michigan, where I live. That the Democratic Party is definitively no longer interested in the white working class was proved this year by the failure of Senator Jim Webb’s candidacy and the non-candidacy of Vice President Biden. But Donald J. Trump is connecting with Michigan’s shattered blue collar class. [Dems, unions try to repel Trump’s labor appeals, by Nolan Finley, Detroit News, July 27, 2016]. Oddly, he reminds me of another outrageous champion of Michigan blue collar workers—the late Teamster Union president Jimmy Hoffa, raised in Detroit, destroyed by that icon of the modern Coalition Of The Fringes Democratic Party, Robert F.  Kennedy. 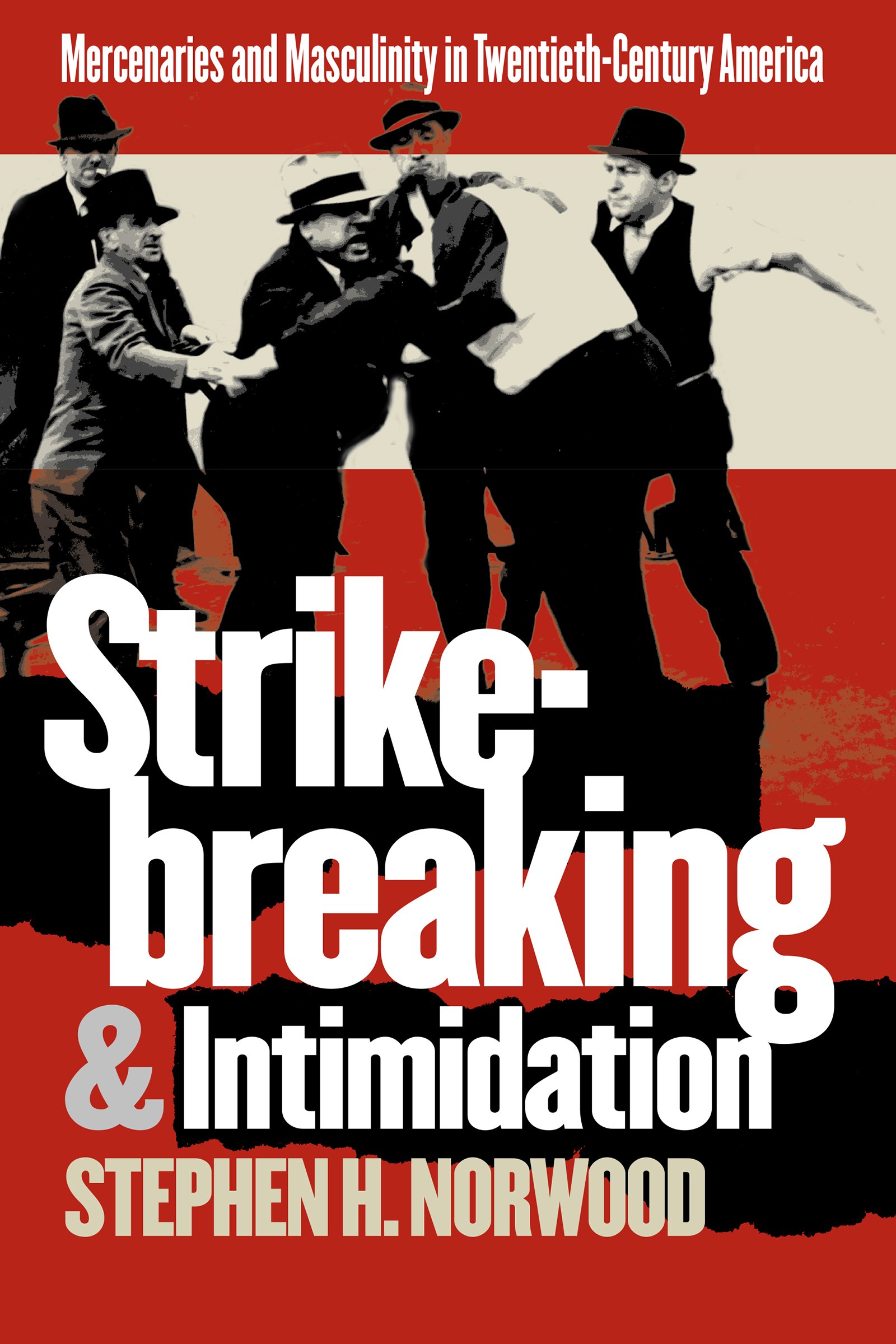 Hoffa, born in 1913, became the Teamsters Union president without a high school education. His father died young and he had worked in his mother’s home laundry as a child, but they were unable to make enough to support the family. Hoffa became a Teamster organizer in Detroit in the 1930s during the Depression.

At that time, employers sometimes hired mobsters to beat up union members. See Strikebreaking and Intimidation, by Stephen H. Norwood (2002). Henry Ford, for example, had a close friend executive who ran a huge in-house agency to spy on Ford workers and rough them up if necessary. In his autobiography (Hoffa: The Real Story, 1975), Hoffa said he had his head split open 6 times and was beaten at least two dozen times by police or strikebreakers during his first year as a Teamster agent. Hoffa also acknowledged that he met with Detroit’s Purple Gang, an organized crime group, and other violent groups, so that the groups would stop attacking his members. 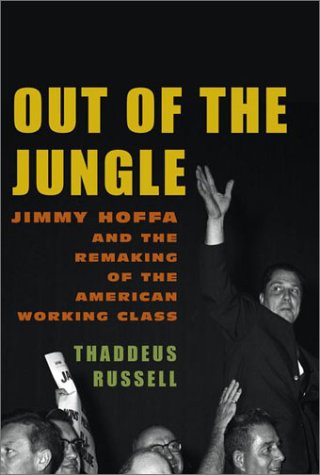 Hoffa is now notorious for his alleged mob connections. But he also helped create a Teamsters union of over two million members and a master contract for most of the country which helped his members tremendously. See Out of the Jungle: Jimmy Hoffa and the Remaking of the American Working Class, by Thaddeus Russell (2001).

Hoffa had given truck drivers real clout in this country. He was idolized by his members, who were given his personal phone number for help. He neither drank nor smoked. Hoffa was even respected by truck company owners! One owner stated “James R. Hoffa has many of the characteristics of the founders of our country.” Another manager said he was “fair in most respects…I admire him tremendously, and like him very much…He’s actually a genius.” (See Hoffa by Arthur A. Sloane, 1992]

In some ways, there are parallels between the Kennedys and Hoffa. Robert Kennedy became obsessed with Hoffa’s mobster contacts—perhaps inevitable in Hoffa’s world. And certainly the Kennedy family sacrificed immensely for this country. But numerous authorities have suggested that Kennedy patriarch Joe Kennedy himself had mob ties: author Seymour Hersh, in his best-selling book, The Dark Side of Camelot; Antoinette Giancana, the daughter of Chicago mafia chief, Sam Giancana in her book 2005 book JFK and Sam; Patrick Kiger, writing in the National Geographic Channel online; and Tina Sinatra, daughter of Frank Sinatra on CBS’ 60 Minutes. 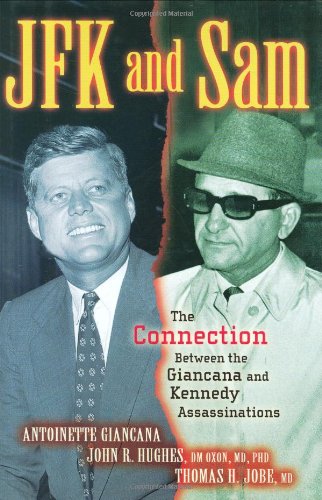 Robert Kennedy had grand juries and a huge staff spend years trying to “get” Hoffa over and over. Hoffa was finally imprisoned for several years, and was never able to return to his beloved union as president.

Ironically, Hoffa is also believed by many to have incurred the wrath of the Mob—to have perhaps been murdered by them (his body has never been found) in 1975, before he could reclaim his union presidency.

Hoffa should be seen in context—his lack of education; the violent environment that he had to work in. I have never heard Joseph Kennedy or genius industrialist Henry Ford called thugs. But they are said to have known some thugs. I don’t condemn Henry Ford or Joseph Kennedy either, they were also just products of the times.

In Hoffa’s day, Presidents Franklin Roosevelt and Harry Truman were tremendous friends to labor unions and powerless workers. But recent Democratic administrations have drifted toward becoming a champion only for well-to-do liberals and “minorities.” The white working class is held in contempt. Look at the current campaign to discredit the police. Trump supporters are routinely smeared as bigots on national TV.

You can see the beginning of this attitude in the toxic relationship between the embattled working class hero Hoffa, and the condescending elitist Robert Kennedy. From Kennedy’s book The Enemy Within:

We listened to testimony from the dregs of society. … But there was no group that better fits the prototype of the old Al Capone syndicate than Jimmy Hoffa and some of his chief lieutenants in and out of the union. They have the look of Capone’s men. They are sleek, often bilious and fat, or lean and cold and hard. They have the smooth faces and cruel eyes of gangsters; the wear the same rich clothes, the diamond ring, the jeweled watch, the strong sickly-sweet-smelling perfume.[PDF]

What Kennedy was talking about here are differences in class and ethnic styles—not criminal markers.

These investigations appear to be Robert F. Kennedy’s first experience with any part of the labor movement.

In contrast, some 50 years ago, RFK was one of the first major political figures to support enthusiastically the United Farm Workers. Cesar Chavez of whom he called “one of the heroic figures of our time.”

Personally, I think that this was a worthy cause (although it’s worth noting that Chavez was critical of illegal immigration). But over the years the Democratic Party in general seems to have become obsessed with minorities. Immigrants often are uneducated and they sometimes engage in crimes. Where is the Democratic concern for similar whites and Hispanics who are their fellow citizens?

(Actually, in 2013, Democrats did start an attempt to reconnect with white working class voters called “The Bobby Kennedy Project —but it was aborted for “insufficient funding.” [CAP Cancels Rollout of Project Aimed at Working Class White Voters,By Lachlan Markay, Washington Free Beacon, May 27, 2014] This certainly was a good idea and should be revived).

In the meantime, decades after their controversial champion Hoffa fought for them, the white working class’s wages and life 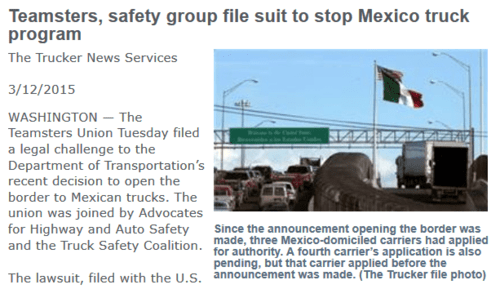 expectancy are both in free fall. By 2015, American wages had been in broad-based stagnation for 35 years.[How the Economy Has Performed for Workers This Year, Economic Policy Institute, August 25, 2015 Middle-aged whites’ life spans are in dramatic decline due to suicide and drug and alcohol addiction. This trend among middle aged whites is unprecedented in modern times, comparable to the AIDS epidemic.

The Teamsters Union sued recently to hold off a new program to allow Mexican trucks to enter the U.S. and compete with American truckers. [ Teamsters, safety group file suit to stop Mexico truck program, The Trucker News Services, But how long will it take for truck driving to become another “job Americans don’t want”?

Now, into this depressing mess, wades streetfighter Donald Trump—screaming about the loss of blue collar jobs! There is no official Teamster endorsement at this time, but Trump recently tweeted that he is honored that there is a Facebook page called Teamsters for Trump.

Jimmy Hoffa, whatever his flaws, delivered results for the working class. Whatever Trump’s flaws, watching his rallies, I am touched by the faces of the working people who are beginning to love a possible new champion.

Kathy Knechtges [Email her]is a writer who lives on the Great Lakes and specializes in working people, spirituality and the family. 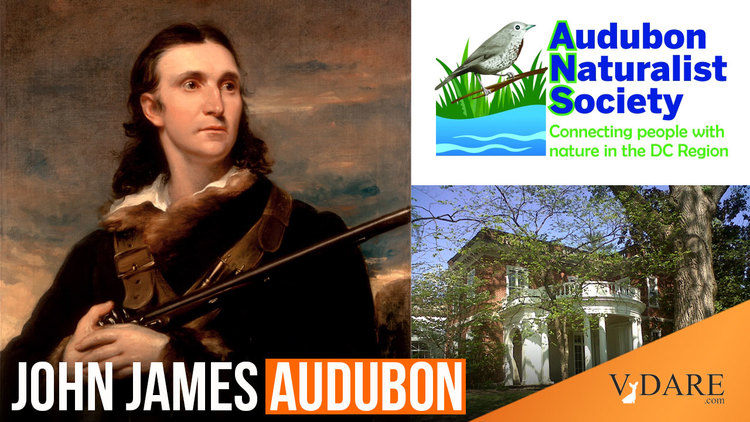