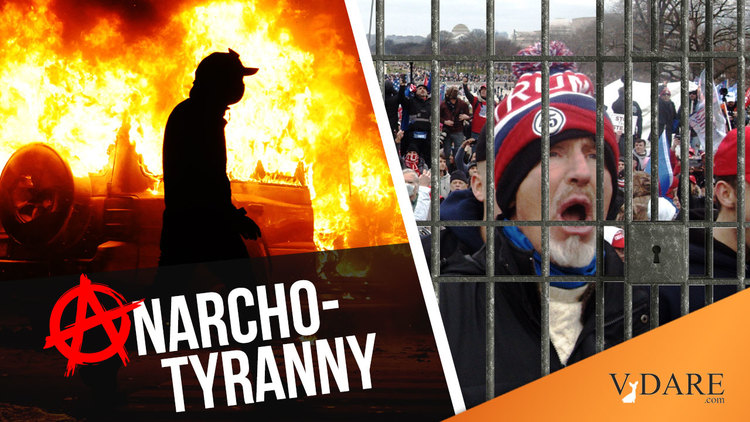 While America faces a historic crime wave, the Department of Justice is maintaining a furious campaign of persecution against January 6 protesters. It’s impossible to see this as other than politically-driven, given its total indifference to political violence from the Left. National law enforcement now operates like a political police, more interested in protecting Regime Media narratives than Americans’ lives and property. Every day, it gets harder to support a government that has nothing to offer the country’s core population but hate. This can’t go on.

Mass murderer Ahmad Al-Issa was a Muslim immigrant reportedly on the FBI’s radar—yet this has led to no Regime Media or law enforcement campaign against foreigners radicalized by Islam. Instead, we’re getting more drumbeating about gun control, even though the banal truth is that it’s inner-city crime that’s increasing and no one is doing anything about it.

The Regime Media is attempting to weaponize the January 6 Capitol riot as a kind of Reichstag Fire. Yet facts keep getting in the way. The most obvious

In fact, the whole “attack on democracy” melodrama has fallen apart. Politico just told its progressive-leaning readers to prepare for a “jarring reality check” when most of those who entered the Capitol receive little or no jail time [Many Capitol rioters unlikely to serve jail time, by Josh Gerstein and Kyle Cheney, March 30, 2021].

The Dem/Media Complex had invented a carefully organized “white nationalist” coup attempt out of whole cloth. The truer and more tragic story: these protestors marched under the mistaken assumption someone in power cared about them. No one did.

As proof, consider that some protesters are in jail now and have been denied bail because government lawyers successfully argued that denying Joe Biden’s legitimacy as President of the U.S. means they constituted a flight risk [America’s Political Prisoners First, by Julie Kelly, American Greatness, February 4, 2021].

Prosecutor Michael Sherwin bragged on 60 Minutes that he was leaning towards “sedition” charges for what CBS called the “assault” on the Capitol [Inside the prosecution of the Capitol rioters, by Scott Pelley, 60 Minutes, March 22, 2021]. Sherwin is now being investigated for what some have called “grandstanding,” but an opinion piece in USA Today, the country’s most widely read publication, said that he was totally right to do an interview with a television program even before trials have begun [DOJ lawyer Michael Sherwin was right to discuss Capitol riots on ’60 minutes’ interview, by Ankush Khardori, March 30, 2021].

When protesters are being tried for “sedition,” we’re entering new political territory.

None of this is to deny that illegal acts took place at the Capitol (mostly trespassing—as during the memory-holed Kavanaugh incursion). Even if Officer Sicknick died from unrelated causes, there’s no excuse for brawling with him. When there’s a riot, regardless of cause, the answer is ruthless coercion.

However, the reason such force is justified is because the rule of law has value in itself. And if we are being honest, the rule of law hasn’t existed in this country for a very long time. The government, including its Deep State dimension, has destroyed its own legitimacy.

Thus the Black Lives Matter riots should have been put down at the beginning, rather than being given political patronage and corporate sponsorship. They were not. Hence they triggered a wave of violent crime that has mostly victimized the very people BLM protesters claimed to protect. It was a catastrophic failure of government at every level to provide its basic function: public order.

We see this too in the deliberate refusal—not the accidental failure—to enforce immigration law [Former CBP Chief: Over 45K Border Crossers Freed Into U.S. By Joe Biden, by John Binder, Breitbart, March 30, 2021]. But simultaneously, Americans are told to mask up, suffer economic hardship, and endure social isolation because President Joe Biden says we have a “patriotic duty” [Biden Urges States To Maintain Mask Mandates As A ‘Patriotic Duty, by Gabe Kaminsky, Federalist, March 29, 2021].

But what “nation” Joe Biden is referring to? If the federal government doesn’t feel like enforcing basic immigration laws in the midst of a pandemic, it’s hard to fault ordinary Americans for ignoring arbitrarily enforced mask laws that the powerful seem to ignore at will [Photos emerge of a mask-less Gavin Newsom breaking his rules for private gatherings, KUSI, November 18, 2020].

Mask laws and lockdowns are just small-scall examples of the nationwide anarcho-tyranny we see every day with America’s Open Borders policies.

Even the most serious terrorist attacks and mass shootings only have value to those with power if they can be spun against white Americans. Thus when a white male shot nine people in Atlanta, the story was immediately shoehorned into a forced Narrative about “anti-Asian hate,” even though the killer had also shot whites and seemed to be motivated by perverse sexual drives. But when ten white Americans were gunned down by a Muslim immigrant, the Regime Media immediately pivoted to ways the federal government can strip law-abiding Americans of more constitutional rights. The icky reality of black-on-Asian crime has been ignored even during this moral panic about “anti-Asian hate.”

It goes without saying that given the extent of media incitement against whites, almost every black-on-white crime in the country can be laid at journalists’ feet. After all, they’ve spent the last year telling blacks that whites are engaged in a gigantic conspiracy to hold them down since before the United States was even founded.

Thus, when Journofa express alarm at “militias,” fraternal groups, or bands of neighbors defending themselves, they should stop pretending they don’t know the cause.

For an entire year, the American people were told by the media that violence works. If the mob comes for us, we are on our own. Were Americans simply supposed to lay down and die? Is the law supposed to be completely arbitrary?

Apparently, the answer to both questions is: yes. Americans are now being told to sit down, shut up, and accept comically obvious double standards and lies.

Even the American military, which despite astounding defense spending will probably never win a war again, has become just another Affirmative Action jobs program.

Like others who haven’t served, I once had fierce self-loathing for not having been in the military. Now I’m relieved, as I no doubt would have been dishonorably discharged for supporting Donald Trump in 2016 [FBI Deploys Creepy “Sentiment Analysis” Tools To Screen National Guard For Pro-Trump Sympathies, Revolver, March 30, 2021].

Of course, even the military isn’t supposed to be an institution unto itself. It’s what it defends that is supposed to be important in a free country. Yet that’s not what we have any more, is it? If you’re a white American, or even a non-white American who doesn’t despise the Historic American Nation, our rulers clearly say you are not welcome. Belief in the all-encompassing power of an unfalsifiable “systemic racism” canard has become a state religion. Even a momentary lapse can cost someone a career.

What exactly is this government even for, other than oppressing us?

If Joe Biden or anyone else wants to have a war with China, send the journalists and the Affirmative Action recipients—for the rest of us, it’s not our fight.

Whatever games the politicians are playing in Washington, leave us Americans out of them.

It’s not that they’re indifferent towards us—they actively hate the people they rule.