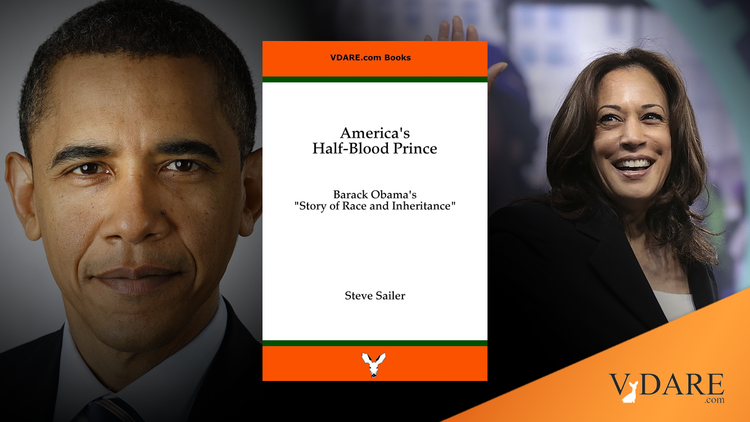 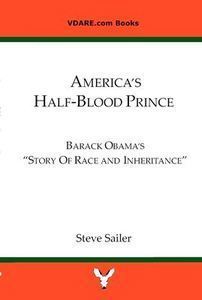 The lives of President Barack Obama and Vice-Presidential nominee Kamala Harris have striking similarities. Both came from relatively privileged backgrounds. Both fit the needs of the Democratic Party’s new coalition. Both are “black” but via foreign parents:  neither shares the experience of African-Americans descended from slaves. And both support and symbolize “The Great Awokening,” the American Left’s dramatic recent shift from liberal to Cultural Marxist values, which apparently makes affluent whites feel good about themselves but is reaping a terrible toll on the very people (poor blacks in inner cities) that the movement claims to be defending.

On Monday, Steve Sailer joined me for a discussion of his 2016 book America’s Half-Blood Prince: Barack Obama’s ‘Story of Race and Inheritance,' which is the latest selection in the VDARE Book Club. What struck me most throughout our discussion is the feeling that we have been through this before. After all, it was the urban riots and anti-police rhetoric of Obama’s second term that helped Donald Trump win the White House. As Steve said yesterday, after the 2016 Dallas Black Lives Matter shooting that took the lives of five police officers and is accordingly now memory-holed, he thought to himself: “So Donald Trump is going to be the next President of the United States.” Will President Trump be re-elected by a country fed up with riots and violence?

Of course, there are some differences this time around. Monday night’s looting and attacks on police in Philadelphia barely made the Main Stream Media. Digital deplatforming and anarcho-tyranny have made it far more difficult for any opposition to mobilize against the neo-Jacobins in the streets.

President Donald Trump was elected because his opponents underestimated both him and the power of his nationalist message. But rather than rethinking their campaign of hatred against the Historic American Nation, the lesson that MSM journalists and the Ruling Class as a whole took from 2016 was that repression needs to be intensified.

Perhaps they are right that this was the best tactic. Either way, Kamala Harris would certainly be willing to put the power of the state behind the oligarchs who are already doing their best to silence us.

Joe Biden himself is hardly a factor. He is simply a harmless face to fool naïve white Americans into thinking that Ol’ Joe will bring things back to “normal” so they can enjoy sitcoms and professional sports again.

But instead, as Sailer noted in our discussion, Biden will be the Hindenburg of the 21st century America, a comforting face for normies who will prove unable or unwilling to control the radicals that “his” government will put in power.

I’m a notorious pessimist—at least in the short-term. Personally, unlike some of my VDARE.com colleagues, I don’t see President Trump repeating his 2016 performance, mostly because I don’t see the Left taking victory for granted.

I also think that many white Americans are simply exhausted with the politics of the last few years. A vote for Biden is a vote for cultural surrender, a plea for one last generation of Americans to be allowed just to enjoy their comforts before the country descends entirely into the Third World.

But unfortunately for them, as Steve and I agreed last night, an ever-increasing demonization of white males is necessary to keep the Democrats’ unruly coalition from turning into a circular firing squad. Democrats will be happy to take white suburban votes on Election Day, but those whites (especially women) will be surprised when the campaign of hatred intensifies, rather than declines, after a Biden victory.

Still, even if the Trump Administration is coming to an end, it doesn’t mean it was a loss. More than ever, ordinary Americans can see the System for what it is. The iron fist of tyranny can now longer be concealed within the velvet glove of “democracy.”

Modern journalism consists almost entirely of campaigning for deplatforming political foes, concealing unwelcome news, or simply magnifying personal neuroses. The “Deep State” is now longer a conspiracy theory but something that exists and is openly defended by journalists. The CIA, which the Left once claimed was symbol of all that was evil about the American system, is now part of the “Intelligence Community,” which is bravely working as part of the #Resistance to President Donald Trump.

It is important that these illusions are shattered if we are ever able to make real progress. There is no way out but through.

Steve Sailer is, as I think the “mainstream” journos reading this will agree, the most influential writer of our times that you aren’t allowed to mention. His book (inspiring which, Peter Brimelow far too modestly said, would be his own legacy) revealed a great deal about the System we live under. It showed how a man like Barack Obama could serve as a plausible front for the System—but also how the dream of a united, colorblind America would ultimately prove impossible.

With Obama campaigning for his former subordinate, Steve’s book is arguably more relevant now than it was when first written. The stakes in 2008 or 2012 don’t even compare to the existential national crisis of 2020, the new normal of lockdowns, riots, and censorship.

For that reason, give Steve’s book a second (or first) look. And I hope you enjoy our wide-ranging discussion on what has led up to this critical time in our history.

And thank you to our readers and donors who make all this possible.

As long as you’re with us, we’ll keep fighting.