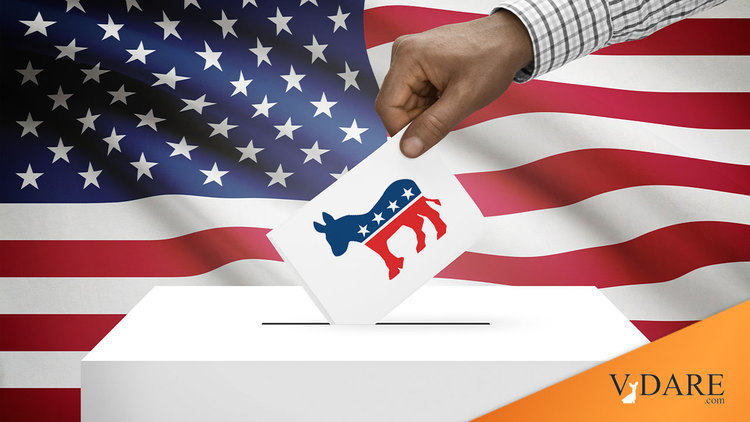 If Republicans Were Smart, They’d Brand Democrats As The Black Party—Gaining Hispanic And Asian Votes

Growing up in a non-white neighborhood offers one a startling perspective about the multicultural inferno that awaits America in the years to come. But watching petty crime and highly organized ethnic gangs taught me two things. One, whites—the Historic American Nation—need not endure their dispossession and replacement. Second, if Republicans branded the Democrat Party as the “Black Party,” they might just push enough Asians and Hispanics to vote GOP that it secures solid majorities and stops what’s happening to whites.

The global view of the past year suggests that anti-white black crime and the anti-white hate of the leftist Mainstream Media show no sign of abating. The MSM, intelligentsia, and pro-black politicians have shamed whites into surrendering on one issue after another to do penance for the original “sin” of “racism.”

That’s why this summer’s rioting in South Africa back in July had me thinking about America’s future [EXPLAINER: What caused South Africa’s week of rioting?, by Andrew Meldrum, Associated Press, July 19, 2021]. ​The arrest of former president Jacob Zuma, an ethnic Zulu, for contempt of court, inspired the riots. Zuma’s supporters were convinced that the corruption investigation into Zuma  was part of a vast anti-Zulu conspiracy.

More striking, however, was the interracial beef. It showed that non-black minorities will defend themselves more vigorously from blacks than will whites. Whites won’t even fight back when they’re about to be murdered, as the Wichita Massacre shows. Scenes of Indians defending their neighborhoods from rabid pro-Zuma hordes reminded one of the Koreans defending their stores from predominantly black rioters throughout the King Hoax riots of 1992, of course  [South Africa: Indian community takes up arms to defend their businesses as violent riots break out, here is why they may be targeted, OpIndia, July 13, 2021]. But what happened directly afterward in the next election, as well as what happened in the election after the Brown Hoax Riots in Ferguson, Missouri in 2014, offers a lesson.

I was far too young to truly grasp the visceral experience of the Rodney King riots, but studying that incident has been educational. Americans watched in horror as blacks razed Los Angeles after the cops who arrested King, and gave him some lumps for their trouble, were acquitted. A raging black mob pulled Reginald Denny from his truck and almost murdered him. Koreans took to their rooftops with rifles to defend their property from swarthy scoundrels.

But what most might not remember is how Asians voted that year. They cast 55 percent of their ballots for George H.W. Bush in the presidential election, largely in response to the black saturnalia that took place earlier that year [It's Race, Stupid, by Samuel T. Francis, American Renaissance, January 2001].

Likewise, Asians didn’t like what they saw in “gentle giant” Michael Brown. Video showed Brown pummeling a diminutive Asian man before he resisted arrest and attacked Officer Darren Wilson, who shot him in self-defense. But as with the elections after the L.A. riots, Asian voters who saw the footage of Brown in the convenience store were likely reminded of their antagonistic relationship with blacks. They probably put two and two together and realized that Democrats were going all in on blacks. Unsurprisingly, the normally solid Asian vote for Democrats fractured. It virtually split even with the GOP for the 2014 midterms [What we learned about the American voter in 2014 ,by Jonathan Topaz, Politico, December 31, 2014].

Not that the GOP doesn’t have something of an Sisyphian climb to get the Asian vote. Democrats comfortably won the vote in the 2016 and 2020 presidentials, although the gap narrowed 4 points, 65 percent to 61 percent. But, as a Venezuelan immigrant, I think the GOP can make inroads with Asians and other non-whites such as Hispanics, who are not huge fans of Black Lives Matter or blacks in general. My plan for trying to break the Democrat stranglehold on the non-white vote, however, does not involve ethnic pandering.

Better to call the Democrat Party what it is: the Black Party. Black crime and behavior in general repulse most non-whites. Constantly reminding them that Democrats enable harmful black behavior could make them reconsider reflexively voting for Democrats. Why not remind Asians, every day, just who is attacking Asians in those hate crimes falsely attributed to “white supremacy"?

That said, the lesson from South Africa cannot be stressed enough. And it goes beyond the anti-white genocide there. The clash between blacks and South Asians offers a glimpse of the future in which only non-whites will be permitted to fight blacks, just as Koreans locked and loaded to defend themselves in 1992.

The silver lining in this cloud: While non-whites pummel each other, whites can watch…and wait…and rebuild. Then when the time is right, and just enough nonwhites abandon the Black Party, whites can retake their institutions.

Whites must never fall victim to the barrage of demoralizing propaganda that burgeoned in Critical Race Theory. They must remember their past, when they endured vigorous and existential attacks from the Moors, the Persians, and the Ottomans. Survival against all odds is embedded in their DNA.

The Historic American Nation can survive, but only if the GOP’s establishment elites are overthrown and replaced by real nationalists who will dig in their heels and give the forces of multiculturalism a bloody nose.

That effort begins with depicting the Democrat Party for what it is: a Black Party, and no home for the Historic American Nation, or the non-black, non-white minorities who should understand that the Black Party is their worst enemy.

Pedro de Alvarado is a Hispanic dissident who is well aware of the realities of race from his experience living throughout Latin America and in the states.