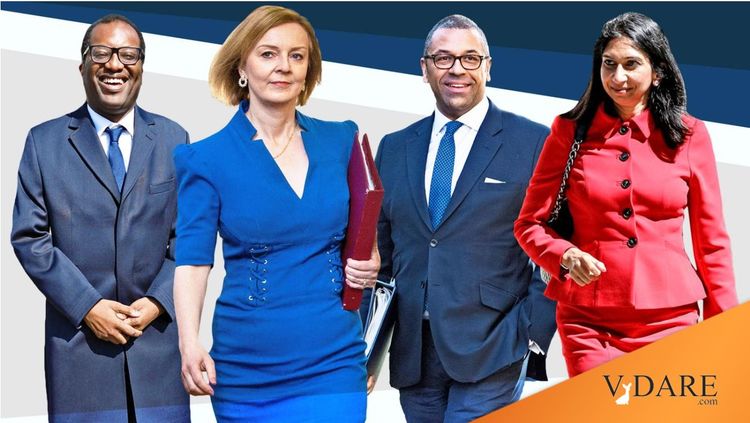 In U.K. And U.S., Cuckservative Parties Pander To Diversity, Rebuff White Base

Above, the London Times says ”Liz Truss, if confirmed as prime minister, is expected to appoint Kwasi Kwarteng, James Cleverly and Suella Braverman to the top jobs.”

A new Conservative cabinet is in charge of the United Kingdom—but it’s missing something. None of the top ministers are white men. This is an odd omission considering white men built Great Britain and its once-mighty empire, and whites still make up the majority of the population. Yet, they’re not represented in the governing cabinet of the party that’s supposed to advocate for their interests. Rather than see this as a problem, Conservatives are celebrating their lack of white men as proof they love diversity more than the Labour Party. The same disturbing trend appears in our own Republican Party, which spends more time fawning over their token minorities than fighting for the people who actually vote for them. This Cuckservative diversity pandering only reflects acceptance of dispossession, and it will fail as a political strategy.

Britain’s new prime minister, Liz Truss, is white. But not one of her three top ministers are. The foreign minister, James Cleverly, and finance minister, Kwasi Kwarteng, are black. Suella Braverman, the new home secretary, is Indian.

This diversity push is not new. Boris Johnson, the departing Prime Minister, boasted the most “diverse” cabinet in British history; all three of his finance ministers were non-white. The campaign to replace Johnson as party leader was similarly diverse. Six of the ten candidates were non-white, and only two were white men. Truss’s final competitor was Rishi Sunak, an Indian [Liz Truss’ Cabinet is Britain’s first without a white man in one of the top jobs, Reuters, September 7, 2022]. 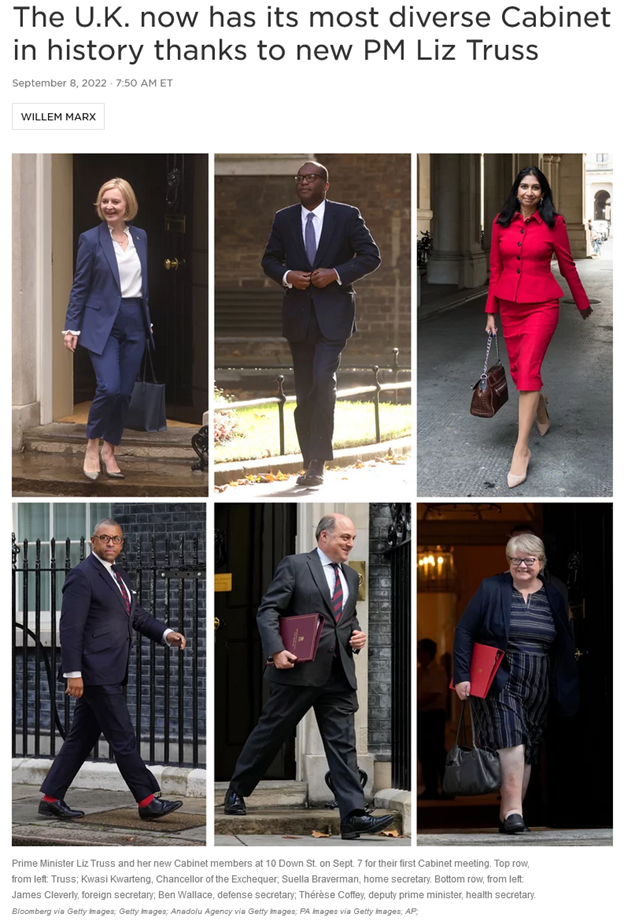 You would think the Tories’ base is filled primarily with minorities. But that couldn’t be further from the truth. Only 24 percent of U.K minorities vote Conservative; 62 percent vote Labour. The Conservative party is still overwhelmingly white—and 94 percent of its Members of Parliament are white. Yet, most of them are apparently excluded from leadership on the basis of their race. The lucky six percent who aren’t white can expect a better chance at leadership roles than their white counterparts. This is by design. For years, the Conservatives have pushed for non-white candidates to represent their constituencies and elevated them to prominent roles. The party is even more aggressive about elevating minority candidates than its Leftist rivals, leaving some journalists to dub the Conservatives the “party of diversity” [Why the Tories Are Britain’s Party of Diversity, by Adrian Wooldridge, Bloomberg, July 12, 2022].

England is still nearly 85 percent white, and 78 white English. You would never know this from the makeup of its political elite. Whites apparently don’t matter, not even to the party they primarily vote for.

A similar situation is found in the U.S. The Republican Party is the white party, much to the dismay of the Republican Party. The majority of whites vote GOP and getting enough of the white vote is key to GOP victories. Indeed, the Sailer Strategy to get that vote is what won the White House for Donald Trump in 2016; he appealed directly to the interests of white voters. But the GOP doesn’t want to acknowledge this. Instead, the party spends countless dollars to present itself as “diverse.” The most it can show for it is slightly higher Hispanic support—and that support is due primarily to Trump, the man who rebuked GOP minority outreach ideas with his 2016 platform. Yet, Republicans persist in their idiotic schemes.

When Republicans did better than expected in 2020 congressional races, House Minority Leader Kevin McCarthy attributed the victories to the diversity of GOP candidates. “Every Democrat incumbent who lost either lost to a woman, a minority or a veteran Republican. Meanwhile, Democrats are set to have the slimmest Democrat majority since World War Two,” he enthused at the time [House Minority Leader Kevin McCarthy hails GOP wins, by Justin Stabley, PBS, November 12, 2020]. “The Republican coalition is bigger, more diverse, and more energetic than ever before—thanks to President @realDonaldTrump,” he tweeted. “His efforts to reach every demographic has [sic] positively expanded the future of the GOP.”

The Republican coalition is bigger, more diverse, and more energetic than ever before—thanks to President @realDonaldTrump. His efforts to reach every demographic has positively expanded the future of the GOP.

Join me for a news conference starting soon. https://t.co/5zXyrK785h

Republicans apparently believe this is the winning formula and have recruited dozens of non-whites to run for office. For the midterms, Republicans are running more than 60 non-white candidates. GOP leaders say they’ve been finding these diverse recruits from local chambers of commerce [House GOP’s diversity bet, by Sophia Cai, Axios, September 8, 2022]. The party also emphasizes that its diversity push is part of a desire to “reflect” what the country looks like.

“We made a significant effort to not just say we would do recruitment differently but to actually get stronger recruits, and forcefully engaging on behalf of stronger recruits, more diverse recruits, recruits that reflect their electorates and the country,” said Dan Conston, the president of the Congressional Leadership Fund, House Republicans’ super PAC.

Together, we will keep Texas RED this November.https://t.co/ghx62d6qQz

That’s not very America First. And neither is spending millions of dollars on minority outreach centers that have been placed in black, Hispanic, and Asian communities. The centers’ activities include helping immigrants naturalize so they can vote in elections. Republican Georgia insurance commissioner John King says the centers are extremely important to future GOP success. “We’re having a permanent presence and having a permanent conversation in Spanish, in English, about the values that the Republican Party brings, which are very much in line to the values that generally you hear from Hispanics,” he says. RNC chairwoman Ronna McDaniel claims that the centers are a sign that the GOP wants “to learn how we can better represent your community” [Republicans have invested millions in nonwhite voter outreach ahead of the midterms, by Stephen Fowler, NPR, August 31, 2022].

So now the GOP is courting non-whites through immigration naturalization and promises to advance their ethnic interests. That’s what Democrats do! What happened to putting Americans first?

Problems with this strategy abound.

The Tories and Republicans represent white majorities. They’re supposed to be the parties arresting dispossession and replacement, not acclimating whites to them, or worse, pushing them along.

If neither party wants to stand up for whites, then what good are they?