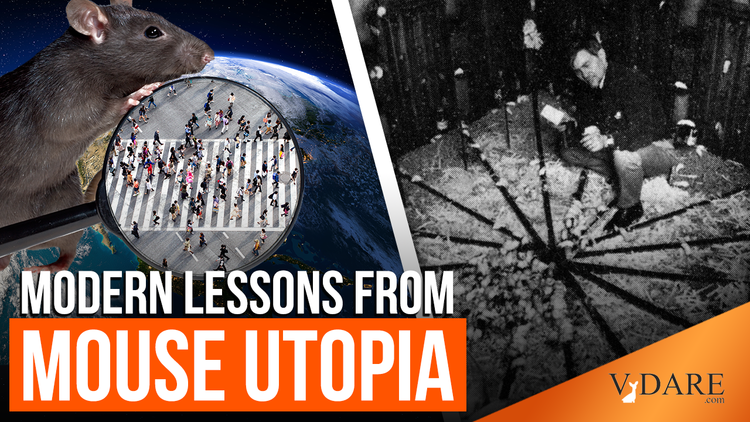 Is Antifa A "Spiteful Mutation"? Are We Headed To A "Mouse Utopia" Collapse?

I reported two years ago on the famous “Mouse Utopia” experiment that seemed to suggest that ideal conditions for humanity might, paradoxically, lead to societal collapse. And now there is the most striking evidence yet that this apocalypse may well be coming to pass.

According to research in British medical journal The Lancet, we are transitioning into a worldwide collapse in fertility. In 2017, there were 2.4 children born per mother worldwide. But we will be well below replacement levels—of 2.1 children—by the end of the century. By then, there will be just 1.7 children per family [Fertility, mortality, migration, and population scenarios for 195 countries and territories from 2017 to 2100, by Stein Volset et al., The Lancet, July 14, 2020]. This will result in a catastrophic population implosion.

Which is exactly what the “Mouse Utopia” scenario appears to predict.

This shocking experiment took place at the University of Maryland between 1968 and 1973. Led by the extraordinary creative scientist John B. Calhoun (1917-1995), its aim was to understand what would happen if intense Darwinian selection dramatically weakened [Death Squared: The explosive growth and demise of a mouse population, by John B. Calhoun, Proceedings of the Royal Society of Medicine, 1973].

In creating this “Mouse Utopia” the experiment replicated post-industrial conditions in the West, where child mortality has fallen from 40% to about 1% since 1800, due to dramatically improved medicine and living conditions.

The results were horrifying: increasingly bizarre behavior patterns, increasingly effeminate males (“the Beautiful Ones”) and masculinized females, autistic-like mice who hadn’t been socialized properly and didn’t know how to deal with other mice, mice of both sexes increasingly becoming disinterested in sex, and females, seemingly, increasingly unable to get pregnant or to sustain pregnancies.

It is still disputed exactly what caused Calhoun’s Mouse Utopia to collapse. But researchers have suggested two key related factors.

In that the brain is 84% of the genome, it is a big target for mutation, meaning that those with general high ‘mutational load’ will also have mutations of the mind which will cause maladaptive desires, such as not wanting sex.

Mice are evolved to be around genetically “normal” mice. The very presence of “the Beautiful Ones” was creating an “evolutionary mismatch,” which was making even genetically normal mice fail to develop properly, because they were no longer in the environment to which they were adapted to develop [see Race Differences in Ethnocentrism, by Edward Dutton, 2019, Ch. 10].

It seems that this is the situation that the West now finds itself in. The rise in mutational load has certainly been documented. And as the rest of the world industrializes, it can be expected to follow the West (and other industrialized countries, such as Japan) in watching its fertility collapse.

And using various kinds of scientific modelling—factoring in the impact of improved medicine in developing countries and many other issues—this is what the research in The Lancet predicts.

The scientists conclude that the global population will peak in the year 2064 at 9.73 billion, and will decline to 8.79 billion by the year 2100.

They predict that, by 2100, 183 countries will be at below-replacement fertility level.

Twenty-three countries—including Japan, Thailand, and Spain—will witness their populations fall by 50% over the next 80 years, while China will see its population fall by 48%.

Professor Christopher Murray of the Institute for Health Metrics and Evaluation at the University of Washington, who is one of the team behind these findings, told the BBC that they were “jaw-dropping”:

“I think it’s incredibly hard to think this through and recognise how big a thing this is; it's extraordinary, we'll have to reorganise societies.”

Needless to say, the BBC’s Gallagher uses these findings to tout the importance of “migration,” especially from Africa. But he also admits that, if these findings are accurate, then migration won’t ultimately solve the problem of an increasingly aging population, fewer and fewer of whom are able to work. As he put it:

Who pays tax in a massively aged world? Who pays for healthcare for the elderly? Who looks after the elderly? Will people still be able to retire from work?

Gallagher’s report argues that this process is happening because more and more women are working and thus delaying or limiting their childbearing, and that they are able to do this because of reliable contraception. However, this—and The Lancet research—ignores most discussion of who is actually breeding.

He does report that non-whites are breeding more than whites:

But there is no discussion of who is breeding among whites.

The answer: people with relatively low IQ, who are inefficient users of contraception for that reason [see Dysgenics, by Richard Lynn, 2011], and people who are extremely religious and extremely right-wing [Political Attitude and Fertility: Is There a Selection for the Political Extreme? by M. Fieder & S. Huber, Frontiers in Psychology, November 27, 2018]. All of these traits are significantly genetic.

So, the world of 2100 is not only going to be embroiled in crisis, but it is going to be less intelligent, and so less able to maintain civilization, more religious (but this may include the new religion of anti-racism), and possibly more right-wing.

And there will no Professor Calhoun to maintain the luxurious conditions that have brought this situation about.

Thus, the most likely scenario will be the collapse of these conditions and, with it, a population collapse back to pre-industrial levels.

Before the Industrial Revolution, the population of Western countries was 10% of what it is today.

And the survivors will be the fittest . . .