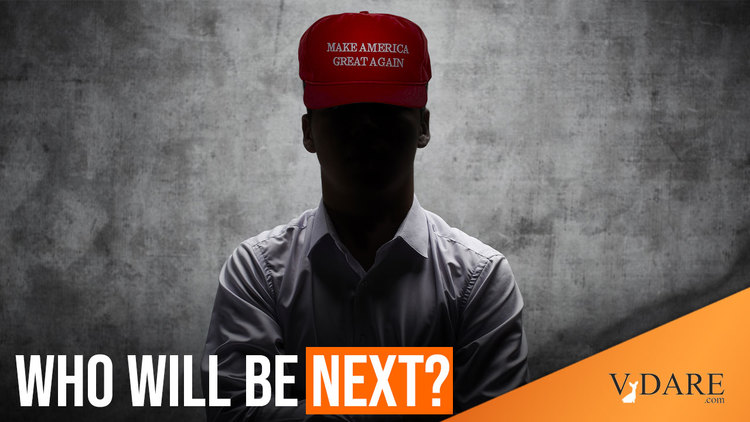 “It Will Only Take One Speech”—Next Champion Of Historic American Nation Could Emerge At Any Moment.

Earlier (2019): The Heirs Of MAGA—Who Will Lead Historic American Nation After Trump?

President Trump is in for a wild ride this week (not for the first time). House Democrats have introduced a resolution to impeach him because he “incited” the “domestic terror attack” (in fact genuinely a Mostly Peaceful Protest) at the U.S. Capitol [House Democrats Introduce Article of Impeachment Against Trump, by Nicholas Fancos, New York Times, January 11, 2021]. That came after Republicans defeated a move to demand that Vice President Trump remove Trump via the 25th Amendment. But one unavoidable truth remains: The GOP base, exemplified by the staggering numbers who turned out for him, stands with Trump. However, many in the GOP Establishment have been intimidated into throwing in with the Ruling Class Narrative. This opens up a huge leadership vacuum. Filling it is crucial to the survival of the party—and ultimately, to the survival of America.

“I want him to resign. I want him out,” Murkowski huffed to the Anchorage Daily News. “He has caused too much damage.” [Alaska Sen. Lisa Murkowski calls on President Trump to resign, questions her future as a Republican, by James Brooks, January 9, 2021].

“I once said the party of Lincoln and Reagan is off taking a nap. The nap has become a nightmare for our nation,” tweeted former House Speaker John Boehner. “The GOP must awaken. The invasion of our Capitol by a mob, incited by lies from some entrusted with power, is a disgrace to all who sacrificed to build our Republic.”

I once said the party of Lincoln and Reagan is off taking a nap. The nap has become a nightmare for our nation. The GOP must awaken. The invasion of our Capitol by a mob, incited by lies from some entrusted with power, is a disgrace to all who sacrificed to build our Republic.

Even before the demonstrations, Senate GOP Leader Mitch McConnell’s circle wanted to go to war against Trump following the party’s defeat in Georgia.

Emotions running high among McConnell-aligned Republicans early Wednesday am — after reality of what transpired in Georgia settled in.

May be the heat of the moment, but mood is for declaring war on Team Trump. Want to marginalize Trump as they marginalized Steve Bannon in 2017

Stupid Party elites blamed the president for the loss of the Senate majority, even though they had begged him to rally for Kelly Loeffler and David Perdue [GOP officials, donors blame Trump for weak Republican showing in Georgia runoffs, by Brian Schwartz, CNBC, January 6, 2021]. It simply never occurs to GOP leaders fail to blame their betrayal of their own constituents for their defeat.

Still, party leaders are wary of impeachment. They know the base is with the president. “If you can replicate his draw amongst rural, working-class voters without the insanity, you have a permanent governing majority,” McConnell adviser Josh Holmes told The Washington Post [Republicans largely silent about consequences of deadly attack and Trump’s role in inciting it, by Anne Gearan et al., January 10, 2021]. Even the Establishment admits that the America First agenda is far more popular than Business First.

The GOP Establishment might hate Trump. But it knows that supporting impeachment would be suicidal. The base would never forgive them. A Third Party might be the result. Republicans don’t want to be destroyed in the 2022 midterms, so they hope Trump just goes away quietly. But he seems determined to go down fighting [Trump Plans Defiant Final Week in Office, Bloomberg, January 10, 2021].

That means he needs his allies on the Hill. Sadly, two top supporters who tried to Stop The Steal have ducked into the bushes. And they might go AWOL altogether, along with other top Republicans.

Missouri Sen. Josh Hawley and Texas Sen. Ted Cruz now face calls for their removal and extreme Ruling Class. So Hawley has clammed up. Sources tell the Watcher that Hawley wants to distance himself from the protests and has no desire to champion Trump’s furious MAGA base.

Cruz has denounced the Capitol demonstrators as terrorists.

Neither will he, it appears, grab the torch from Trump and lead the Historic American Nation.

Apparently, they hope to spare themselves what will surely be a brutal attack from the Trump-hating left. And, of course, they hope to save their careers [Election gambit blows up on Hawley and Cruz, by Marianne Levine et al., Politico, January 9, 2021].

Leading a debate in the Senate on ensuring election integrity is doing our jobs, and it’s in no way responsible for the despicable terrorists who attacked the Capitol yesterday.

And sorry, I ain’t going anywhere. When you and your socialist buddies... https://t.co/UoKBOC8ZU7

Hawley and Cruz weren’t alone in doing the right thing. Nine senators and 138 representatives voted against the certification of the election results in either Arizona or Pennsylvania. House Minority Leader Kevin McCarthy and House Minority Whip Steve Scalise were among them. But this corporate backlash could have major implications for the entire party.

Another problem: intensified tech censorship and a possible “domestic terror” bill. The first silences conservatives on the internet—like the president’s ban from nearly every platform imaginable. The second might result in state persecution of conservatives who merely question the election results or hold Politically Incorrect views [Calls for Domestic Terrorism Law Revived After Capitol Hill Assault, by Alex Emmons, The Intercept, January 10, 2021].

Who will fight the madness? Happily, at least four members of the House of Representatives might step into the breach:

Brooks was the first lawmaker to call for Congress to block the certification of the electoral college votes. He’s one of the best lawmakers on immigration and has bravely decried the “war on whites.” He has refused to apologize for his inspiring speech before the Capitol demonstrations, when he urged the crowd to kick Democrats’ “a**” [Mo Brooks on ‘kick ass’ speech: ‘I make no apology’ for inspiring patriotic Americans, by Paul Gattis, AL.com, January 9, 2021]

He also offered a semi-defense of the demonstrations on Twitter.

(1/2) Part of text I just sent to media person: “In the past, when citizens of a Republic lose faith in their ability to guide the destiny of their country via the election process, they have been FORCED by that country’s rulers into a box and FORCED to chose from any of

3. Fight back with violence.

THAT is why we must fight for honest & accurate elections.

We don’t ever want citizens in America feeling they have been forced into the aforesaid box, with 3 bad options.”

Problem is, however stout Brooks’s heart, he might not have a big enough profile to lead the resistance.

Gosar is coming under the same fire as Cruz and Hawley. The media claims he’s “implicated” in the riots simply for supporting Stop the Steal rallies [Arizona Reps. Andy Biggs and Paul Gosar implicated by activist in Capitol insurrection, by EJ Montini, Arizona Republic, January 10, 2021]. He is strong on immigration and tech censorship.

But, unlike Brooks and much like Hawley, Gosar remained quiet since objecting to the election results. He has touted his bill to tackle tech censorship and satirically stood by his election challenge.

But that’s it. He may be too worried to speak up more than that.

I’ve come to realize this was the fairest election in world history and taxes are too low and Biden will be amazing. And tofu is better than steak. It’s all so clear. pic.twitter.com/2162V7K2pk

Gooden also challenged the election. Like Brooks and Gosar, his credentials are solid on immigration. His Twitter feed is filled with calls to do something about tech censorship and election integrity. He also opposes impeachment. He refuses to play the Left’s game and direct his fire on Trump supporters.

Like Gooden, his Twitter feed condemns the impeachment and tech censorship. Unlike the other three, he’s a Fox News regular and appeared on the network this weekend to defend these Trumpist positions. He has far more clout and name recognition than the others and is a more obvious person to take up the mantle. But he may worry it could damage his reputation with Fox News and Establishment Republicans.

Democrats want to impeach President Trump for a second time! @RepMattGaetz and @PeteHegseth break it down with @JesseBWatters, tonight. #FoxNews 8PM ET. pic.twitter.com/4D1VhHhute

All four men entertain ambition beyond Congress. Alabama, Arizona, and Florida have critical Senate races in 2022. Gooden could even primary Cruz in 2024 because of what has happened now. Standing up against Leftist tyranny would personally benefit all four of them at the same time it helps America.

Whoever rises to the occasion must have a simple pitch:

The Left is exploiting the protests to disenfranchise the 75 million Americans who voted for Trump. They want to take away your First and Second Amendment rights and prosecute you for dissent. Their coup against the president isn’t about Trump: it’s about you. I stand with the president. That’s why we must resist these acts of tyranny just like our forefathers did.

Ahead of the 2016 Republican primaries, VDARE.com Editor Peter Brimelow said  it would only take one speech to launch patriotic immigration reform into mainstream discourse. Sure enough, Trump did that—more accurately, he did it with a soundbite—and he instantly rose to the top of the GOP field and never looked back.

Whoever delivers that speech will be the new leader of the GOP—or, perhaps more accurately, the GAP: the Generic American Party.

.Or will remain the leader of the GOP/ GAP.

Trump will depart office on January 20. But he can still run in 2024 if he avoids or prevails in the coming impeachment fight. He can cement his legacy as the champion of the Historic American Nation with another epochal address…soundbite.

If no one else in his party delivers it, he might be the only one who can.