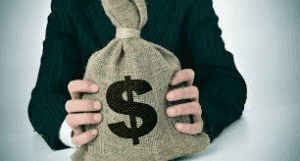 Many years ago, the Saturday evening of the upper-echelon officers of the Southern bank for which I worked was disrupted by the arrival of a messenger from their Chief with a peremptory demand: hand over their ATM cards (then extremely new) and passwords immediately. The resultant chaos became legendary.

Why, I asked? Oh, the answer came, a vote was scheduled first thing on Monday morning in the State Legislature and the Bagman had unexpectedly shown up.

Former Florida Governor Jeb Bush said on Friday he is giving out more than $100,000 to fellow Republicans, in a sign that he is banking on his fundraising prowess to build allies across the country ahead of a potential White House bid…

Bush's political committee, Right to Rise, announced it was handing out $10,000 to Republican state parties in Iowa, New Hampshire, South Carolina, Nevada and Florida - states that will be among the first to hold nominating contests in the 2016 primaries

Exactly to whom Bush gives money is going to be worth tracking. Gowdy has raised our suspicions before. Ayotte is beneath contempt. But it is a pity about Guinta who in his previous Congressional incarnation showed promise.

But the important point: at this point in a normal Presidential run, the candidate is struggling to scrounge up enough money to keep an office open. Bush’s affluence is totally anomalous.

Why has this happened? Because Jeb Bush is the lead AdelZuck candidate. His campaign is being used, not merely to enrich campaign consultants, but as the conduit to corrupt the whole GOP.

Corruption is the story of the 2016 presidential nomination run-up. I defy anyone to read Immigration is not an Iowa caucus-killer . by David M Drucker, Washington Examiner, February 5, 2015 and not smell NeoCon money:

…in interviews with GOP chairmen in nine Iowa counties influential in Republican primaries, the verdict was that national security and foreign policy are driving the debate at this early stage and could prove decisive…That was the case over and over, with the county chairmen volunteering that… Iowa Republicans are hungering for a “Reaganesque” approach to foreign policy and national security. They described the Obama approach as weak, dangerous and “leading from behind.” They blamed him for the rise of the Islamic State of Iraq and Syria, the renewed threat of domestic terrorism and just about every other challenge the U.S. faces abroad.

This interest is faraway places is just not normal in America.

Just like Sheldon Adelson’s advertorials dutifully carried by the Wall Street Journal in late 2012, the massive overfunding of the Jeb Bush campaign is advertising to the pols: THIS IS WHERE THE MONEY IS!

But whose money? That is generally a taboo subject. However, Peter Beinart in Is Jeb Bush Buying the Nomination? The Atlantic Feb 12 2015 smuggles in a hint. After accurately observing that Bush is a weak campaigner who does not empathize with the GOP base, he concludes

Right now, the people with the greatest influence over the GOP’s next presidential nominee are caucusing not in Sioux City but Central Park West.

Central Park West? For those not familiar with the political character of New York, Central Park West is the richest street of the Upper West Side described by Wikipedia as having

the reputation of being home to New York City's cultural, intellectual hub…the Upper East Side is traditionally perceived to be home to commercial and business types.

This is a euphemism for being Jewish rather than WASP (in fact, WASPs have long since been driven from the Upper East Side to Greenwich or New Canaan in Connecticut).

What Beinart is insinuating here is that the GOP nomination is being bought by a small cabal of neoconservative billionaires promoting their particular objectives.

It’s far from clear, of course, that money always works. It notoriously failed in 2012, when Mitt Romney spent over $1 billion in another flagrantly consultant- driven (and –looted) campaign but lost to the eminently-beatable Barack Obama. Money could not stop overwhelming immigration patriot initiative victories in Montana in 2012 and Oregon in 2014. Even in GOP primaries, money is having increasing difficulty in repressing immigration patriot insurrections (see here and here and here). And of course, it spectacularly failed outright in the case of Dave Brat, who defeated GOP Whip Eric Cantor, in a primary where Cantor’s campaign famously spent more in DC steakhouses than Brat spent on his whole race.

But whether any of Bush’s GOP rivals will really use the immigration issue against him remains to be seen.

One thing that is clear, however: Bush’s nomination will mean the third straight presidential cycle in which white turnout falls.

Which underscores the wisdom of Democratic pollster Pat Caddell’s recent comment on the GOP:

The GOP leadership, the lawyers, the lobbyists, the consultant class of the Republican Party, and all the big donors don’t understand that these people are angry…I’ve never seen anything like this in the base of a party. And that is why the analogy to the Whigs is not so far-fetched.

The sick thing is that these donors do not really care that they are steering the GOP to oblivion. The Democrats will serve them just as well. What they are spending to prevent is the evolution of the Republicans into the Generic American Party.

Because, fundamentally, they want to obliterate the Historic American Nation.