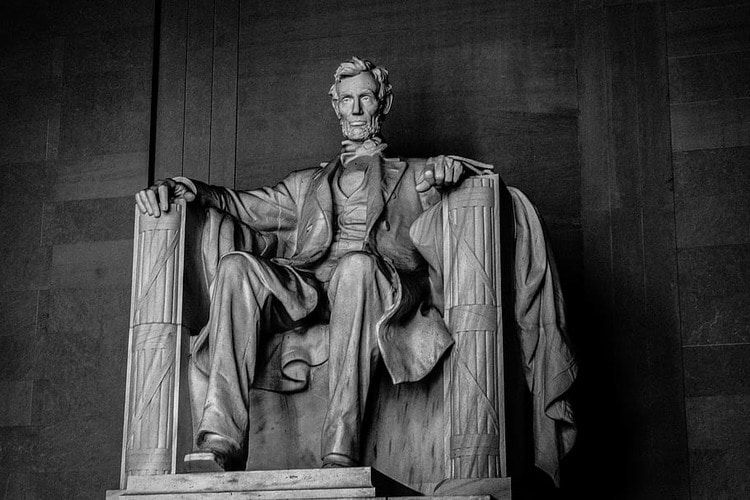 John Derbyshire On A Curious Anniversary—Lincoln’s Endorsement of “Colonization”

Next Tuesday, August 14th, is the 150th anniversary of Abraham Lincoln's address to black freedmen in the White House. I noted this fact on VDARE.com a few weeks ago, with a link to the Great Emancipator's actual speech. Here's the link again.

I added to that previous mention the comment that "I await with keen interest the many articles that will no doubt appear in the Main Stream Media to commemorate the occasion."

That was sarcasm. I should be very surprised to see any commemoration in the MSM. The purpose of Lincoln's speech to the black freedmen — I believe it was the first occasion that a delegation of free blacks had been invited to the White House — was to urge them to educate their own people on the benefits of "colonization," which at that time and place meant the emigration of American blacks to colonies in Africa or the Caribbean:

The President, after a few preliminary observations, informed them that a sum of money had been appropriated by Congress, and placed at his disposition for the purpose of aiding the colonization in some country of the people, or a portion of them, of African descent, thereby making it his duty, as it had for a long time been his inclination, to favor that cause. . History Of The Administration Of President Lincoln, By Henry J. Raymond, 1864

Lincoln was not alone in "favoring that cause." Colonization of American blacks in Africa had been a popular notion all through the 19th century to that point. The difficult thing, when you start looking into the issue, is not to find prominent Americans who supported colonization, but to find any who didn't.

The American Colonization Society, founded in 1816, included among its officers such luminaries of the age as Daniel Webster, William Seward, Francis Scott Key, and Winfield Scott. Henry Clay was a member, as were at least two sometime U.S. Presidents, James Monroe and Andrew Jackson.

Douglas Harper's website on Northern Slavery has an account of the American Colonization Society here, from which:

Though neglected by historians, the American Colonization Society was vastly more popular with ante-bellum Northerners than abolition societies. Its leading men included clergy, college presidents, and politicians of all parties.

The ACS in fact overlapped considerably with the abolitionist movement. Even the fiercest of the abolitionists had kind words for the colonization ideal: Henry Ward Beecher, for example, at least in his younger days, and the formidable Thaddeus Stevens, at least when negotiating congressional bills with Abraham Lincoln.

(In some random explorations of this period of U.S. history that I've been conducting recently, Thaddeus Stevens keeps snagging my attention. What a piece of work the man was! His wit could be very biting, especially when directed at fellow politicians. The story goes that when Lincoln was pondering whether to give a cabinet post to the ethically-challenged Simon Cameron:

Mr. Lincoln reportedly asked Thaddeus Stevens about Cameron's honesty and was told that "I do not believe he would steal a red hot stove." When the President repeated the story, Cameron was offended and a retraction from Stevens was demanded. The crusty Republican congressman replied that he could have been wrong and thus suggesting [sic] that perhaps Cameron might steal a red hot stove.

Why don't we get that quality of wit from our congresscritters nowadays?)

The motives of ACS supporters covered a very wide spectrum, from dislike and mistrust of blacks at one end, to a paternalistic concern, motivated by Christian charity, that free blacks in great numbers would suffer intolerance and persecution at the hands of whites.

This latter concern was the basis of Lincoln's pitch at the August, 1862 event: "There is an unwillingness on the part of our people, harsh as it may be, for you free colored people to remain with us."

The New York City draft riots of July, 1863 would have provided strong support for Lincoln's case, had they occurred a year earlier.

Removing the emotional ends of that spectrum — the visceral dislike of blacks at one end, the paternalistic concern with their future welfare at the other — the solid middle of support for colonization was just rational doubt that free whites and free blacks could live together in any kind of harmony.

This doubt was present long before the ACS came up. Thomas Jefferson expressed it frankly in the 1781 Notes on Virginia:

Deep-rooted prejudices entertained by the whites; ten thousand recollections, by the blacks, of the injuries they have sustained; new provocations; the real distinctions which nature has made; and many other circumstances, will divide us into parties, and produce convulsions, which will probably never end but in the extermination of the one or the other race.

When I first started reading up on this material — somewhat late, I'll confess, in my career as an American — I cooked up the idea of a short story in the alternate-history genre.

My notion was to slip over into a slightly different universe, one in which Lincoln was not assassinated in 1865. He had instead served out his second term, won a third, then died of natural causes a year or two into his fourth.

The reader of my short story would be invited to sit in on an 8th-grade history class given this summer. The teacher alludes to that 1862 assembly at the White House. She reminds the class of Lincoln's great achievements: "He freed the slaves and returned them to their homelands!"

In this alternate universe, Lincoln had taken advantage of his stature as the Civil War victor, and of the great quantity of surplus wartime materiel available, and of the temporary accommodation Americans had made with sweeping government powers and greatly expanded government finances, to repatriate all four million now-free American blacks to Africa. (The earlier Caribbean experiments had been such embarrassing failures he thought it best not to repeat them.)

Within a few years — twenty, I think it was: I did the arithmetic, based on shipbuilding techniques of the time, but have mislaid my notes — the entire black population of the United States had been returned to Africa.

My fictional 2012 schoolmistress included in her lesson some references to the dire things that "might have" ensued had Lincoln's great repatriation scheme not been carried out: decades of legal segregation and oppression of blacks, followed eventually by an over-reaction into white self-abasement, affirmative action, reluctance to report black crime, etc.

I also wanted to throw in some sly allusions to the opportunity cost of not repatriating: a passing reference by the teacher to "our colonies on Mars," perhaps.

Once I got into the relevant history, however, I realized that my story was too far-fetched even for science fiction.

There are at least two reasons why a full-repatriation scheme could never have happened: a political reason, and a logistical one.

However widespread was support for colonization, there was a deep divide between those who thought emigration could only be voluntary, and those who believed it should be mandatory. The great majority of opinion was in the first camp.

Mandatory emigration was not exactly a lunatic-fringe notion: Edward Bates, Lincoln's Attorney General, favored it. The radical Republican congresses of the later 1860s, however, would never have countenanced it.

And the problem with voluntary colonization was that very few blacks actually wanted to leave the U.S. Doris Kearns Goodwin, in Chapter 17 of Team of Rivals, records the negative reaction of black leaders to that August 1862 meeting at the White House. Frederick Douglass was particularly scathing:

He accused Lincoln of making "ridiculous" comments showing a "pride of race and blood" and a "contempt for negroes." … Lincoln's lack of contact with the black community left him unaware of their deep attachment to their country and sense of outrage at the thought of removal.

There you have the first logistical problem: Getting four million free blacks, most of them unwilling to go, to ports of embarkation and on board ships. It would have been the Middle Passage in reverse.

And then there would have been the small matter of settling that number of emigrants in lands that were already quite well occupied, albeit by people at a low civilizational level.

The colonizers can be forgiven here to some degree, since they probably saw in their minds the freed blacks just replicating the original American experience. Perhaps they had forgotten how long that experience had taken, and  how ferocious the opposition of the displaced locals had been.

So, no short story, then. It is salutary to learn, though, how ideas now preposterously out of court were once widely held by persons of intelligence, education, and political power.

There, at least, is something to bear in mind this August 14th.

And to discuss with the younger generation, perhaps. Whether Douglas Harper's assertion that the American Colonization Society has been "neglected by historians" is true or not, I couldn't say, not knowing enough about American historiography.

It does seem, though, that this whole topic has been neglected by educators. Of my two bright and curious teenagers, one graduated from our excellent suburban high school, one about to enter Senior year there, neither had heard of the American Colonization Society.

John Derbyshire [email him] writes an incredible amount on all sorts of subjects for all kinds of outlets. (This no longer includesNational Review, whose editors had some kind of tantrum andfired him. He is the author of We Are Doomed: Reclaiming Conservative Pessimismand several other books. His writings are archived atJohnDerbyshire.com.