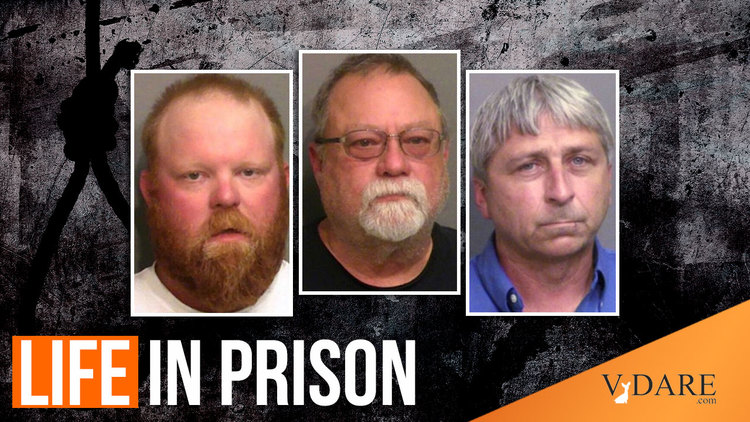 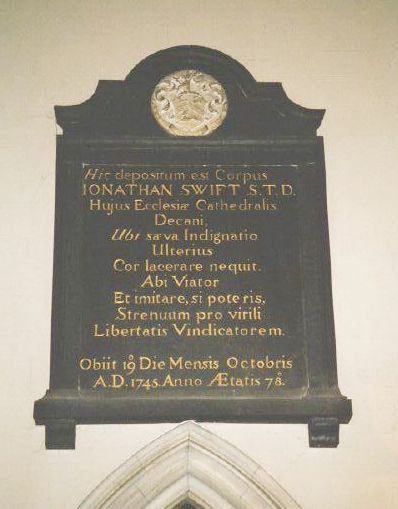 I am nothing like as much of a misanthrope as Swift, thank goodness. As Radio Derb listeners well know, I cultivate geniality. Still, I am not a total stranger to savage indignation. There are times, blessedly few and far between, when I boil and seethe with righteous anger at the stupidity and cruelty of my fellow human beings.

This is one of those times.

Savage indignation, yes. That was my reaction to the sentencing last Friday of Gregory McMichael, his son Travis, and their neighbor Roddie Bryan in the show trial over the death of Ahmaud Arbery two years ago.

The two McMichaels were both sentenced to life in prison with no possibility of parole. Bryan will be eligible for parole but only after he serves the mandatory minimum of 30 years in prison. He is 52 years old, so good luck there, guy.

These were three honest, hard-working citizens, none of whom had any criminal record. Both the McMichaels had in fact served in law enforcement. Their intentions in confronting Arbery were plain: to defend their neighborhood against a likely thief who, whether or not they knew it, did have a criminal record.

Travis McMichael shot Arbery in plain self-defense when Arbery was trying to wrestle away his gun. Gregory McMichael didn't shoot anybody—he was trying to call the police. Roddie Bryan wasn't even armed.

Now their lives have been brutally destroyed, along with the lives of Mrs. McMichael (who has cancer), her daughter, Travis' five-year-old son, and Roddie Bryan's fiancée and their two children.

I can't think of any other way to see this monstrous act of state cruelty other than the way I saw it when the trial was under way back in October: as a ritual sacrifice to the dark gods revered in our weird, sick state religion of white self-hatred. I said back then, following a reference to the Aztecs, that when we offer up our sacrifices, we stage a show trial modeled on the actual trials that used to be conducted before our justice system was taken over by ideological fanatics. The verdict is of course a foregone conclusion.

Then we lock up our sacrificial victim for decades in a place of humiliation and despair, parted forever from his home, his family, and his work.

This is far more cruel than anything the Aztecs would have contemplated.

The McMichaels and Roddie Bryan were sentenced for being white. It couldn't be more obvious. Does anyone—does anyone—think that sentences like this would have been handed down if they had been black petty criminals and Ahmaud Arbery a white mechanic?

The spectacle is made even uglier by the sight of the usual hyenas hovering around. Jesse Jackson and Al Sharpton showed up at the trial, and a posse of rifle-toting black anarchists stood watch outside the courthouse.

Ahmaud Arbery's mother was dabbing her eyes as she told us what a lovely person her son was, apparently having forgotten that she was so scared of him she'd called the cops at least once. His father Marcus showed up, although whether he had played any part in raising Ahmaud we have not been told.

Who cares? The Ghetto Lottery is the prize now—cash from civil lawsuits. Benjamin Crump is involved somehow, looking forward to his share no doubt. [Ker-ching!] For this, half a dozen white lives have been destroyed.

Not the least depressing thing about this case is that such a monstrous injustice has been protested by nobody at all of any prominence in the media or politics. Tucker Carlson, to the best of my knowledge, has not mentioned it. Fox News’  Greg Gutfeld seems to have approved the verdict ['The Five' compare trial of Kyle Rittenhouse and Ahmaud Arbery case in which jury found defendants guilty of murder, Fox News, November 24, 2021]. Someone told me Laura Ingraham has expressed approval too, although I can't find an online link and would be glad to know it's not true.

An email correspondent offers the opinion, which I think correct, that we now have four different legal systems.

I thought perhaps talking about this might soothe my savage indignation; but no, it's still lacerating my heart. I shall therefore stop here, except just, in the spirit of a public service announcement, to repeat the advice I offered in November:

The video shot by William Bryan, which shows Travis McMichael and Arbery struggling for Travis's shotgun, was not known about until the defendants voluntarily gave it to the authorities, on the assumption that it would help prove Travis was acting in self-defense [EXCLUSIVE: Man charged in Ahmaud Arbery murder leaked original video of the shooting, WSBTV.com, May 15, 2020].

The lesson to be drawn, listeners, is, once again: If you are white and being investigated by public authorities, and there is a dead black person to be accounted for, do not co-operate with the investigation in any way.

In particular, don't offer them anything that you think might help your case. They'll just find a way to use it against you.

As my VDARE.com colleague Nicholas Stix put it in his recent From Jim Snow To The White Genocide Project, “the U.S. is showing unmistakable signs of morphing into an anti-white totalitarian state.”