Krugman Wrong, Again—2017 Saw “Emergence,” Not Of “Resistance,” But Of An American Totalitarian Left 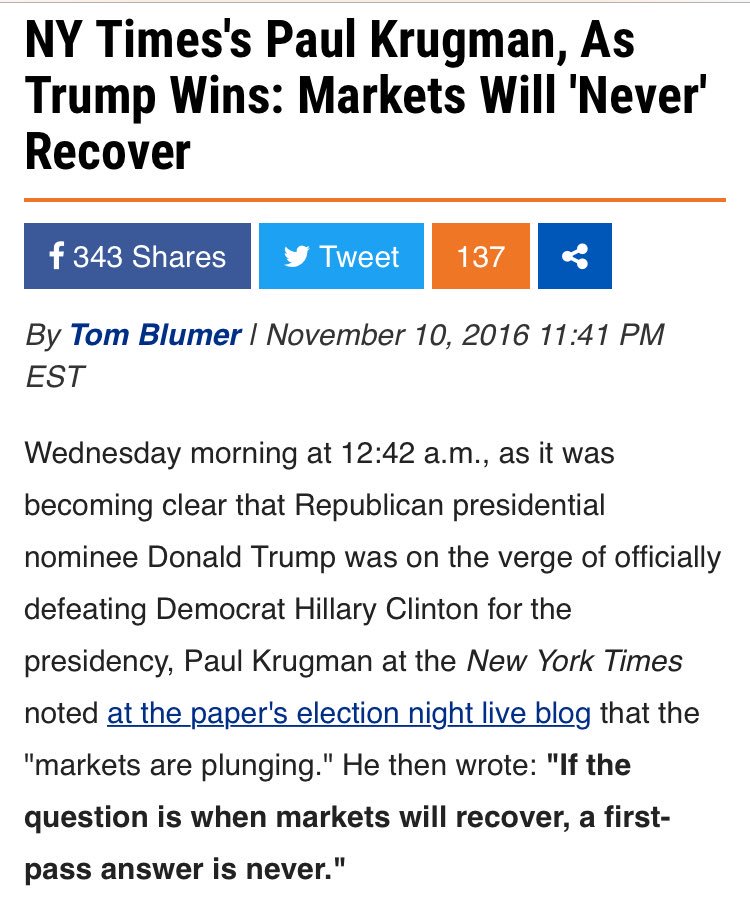 Nobel Economics laureate and New York Times columnist Paul Krugman [Email him] is famously always wrong [Krugman’s bad predictions, by John Lott, Fox News, April 12, 2012]. He will live forever for his 1998 prediction that “the growth of the Internet will slow drastically… by 2005 or so, it will become clear that the Internet’s impact on the economy has been no greater than the fax machine’s.” Equally, Krugman opined after President Trump’s election that markets would “never” recover and “we are very probably looking at a global recession, with no end in sight” [What Happened on Election Day, New York Times, November 9, 2016]. Instead, the stock market has set record highs and economic growth is surging. [Year in Review: President Trump’s First Year in Office, Epoch Times, December 28, 2017]

Recently, Krugman tried to evade the discrediting of his Trump Derangement Syndrome paranoia by celebrating “the emergence of a highly energized resistance” [America Is Not Yet Lost, December 25, 2017]. He boasted about the Democrat victory in Alabama, ignoring sabotage by the GOP Establishment and assorted cuckservatives, and proclaimed:

I’m ending this year with a feeling of hope, because tens of millions of Americans have risen to the occasion. The U.S. may yet become another Turkey or Hungary — a state that preserves the forms of democracy but has become an authoritarian regime in practice. But it won’t happen as easily or as quickly as many of us had feared.

Krugman, and the Opposition Party generally, have it backwards. What actually emerged in 2017 was an American Totalitarian Left, uniting Democrat elected officials, their Main Stream Media academic and corporate auxiliaries, and their paramilitary Antifa wing. It is Trump, and his objective allies in the Dissident Right, who constitute the democratic resistance.

The plain fact is that, in 2017, there is absolutely no price to be paid for attacking the elected President of the United States in the most outrageous terms. Donald Trump does not even enjoy the level of deference any other president could have taken for granted—let alone some “authoritarian”-style immunity from criticism.

Instead, there is a three-tiered system of repression developing in the United States.  Information repression, economic repression, and violent repression are all tools used by America’s Hostile Elite to defend itself against popular resistance. After President Trump’s embattled inauguration, all of these methods of repression became more expansive.

Whatever one thinks of President Donald J. Trump’s conduct so far, he’s been remarkably effective at forcing the MSM to reveal its true motivations. Trump has confronted an almost entirely hostile MSM which has all but openly declared its intention of driving him out of office [Pew: Trump media three times negative than for Obama, just 5 percent positive, by Paul Bedard, Washington Examiner, December 27, 2017]. Once-trusted news outlets such as CNN and ABC News have published fake stories based on little evidence, only to have to make embarrassing retractions.

Yet even as the MSM continues to abase itself, it has formed a powerful alliance to try to marginalize alternative outlets as nothing less than a national security threat [Kremlin trolls burned across the Internet as Washington debated options, by Adam Entous, Ellen Nakashima, and Greg Jaffe, Washington Post, December 25, 2017]. Such an effort is ominous considering how outlets such as the Washington Post have even declared our own VDARE.com a “Russian propaganda site,” paving the way to shut us down as a national security threat. (Needless to say, the openly anti-American Spanish language media is never identified as something possibly linked to a hostile foreign power.)

It’s tempting to say the war between what Steve Bannon called the “Opposition Party” and President Trump is undermining trust in the country’s elite newspapers and journalistic institutions. Yet the truth is more complicated. Trust in the media has actually increased lately—but only among Democrats [Democrats trust the press and Republicans don’t. What now? By Matt Gertz, Salon, December 18, 2017]. Democrats have long been more likely to cut off friends or family because of political disputes, fed by their willing consumption of outrage-generating clickbait from Leftist journalists [Democrats Are 3 Times More Likely to Unfriend You on Social Media, Survey Says, by Jeff John Roberts, Fortune, December 19, 2016].

In the long run, this could lead to the rise of what Global Guerilla’s John Robb calls “The Long Night,” as elites can use their control over the social networking infrastructure to marginalize opposition, drive a Narrative from the top down, and enforce an “all encompassing online orthodoxy” [The Long Night Ahead, September 22, 2017].

Still, there is clearly a market for alternative media source and viewpoints. However, there is a concerted effort to render dissidents unemployable and prevent them from getting their message out. VDARE.com has been a victim, as our Paypal account was cut off following the protest in Charlottesville, even though our site had nothing to do with it. There is also a coordinated media campaign to prevent alternatives to Twitter or Patreon from gaining traction. There are even attempts to track Bitcoin usage to make sure the “wrong” people are not getting donations [Bitcoin’s boom is a boon for extremist groups, by Craig Timberg, Washington Post, December 26, 2017].

“Doxing” random and powerless members of various dissident groups is also of far more interest to the MSM than, say, investigating the mass shooting in Last Vegas. These include people as far down on the totem pole as a pizza deliveryman who simply attended a rally. [Pizza chain fires VT worker who joined Charlottesville rally, by Adam Silverman and April McCullum, Burlington Free Press, August 15, 2017] Supporters would donate to those fired, but the fundraising sites are also being shut down.

Denying legal representation to dissidents, and preventing dissidents from becoming lawyers, is also becoming increasingly common. Journalist/ Cult Marx Enforcers are demanding that NPI’s Evan McLaren not be admitted to the bar despite passing the examination because of his political views [No Counsel for White Men, by Gregory Hood, AmRen, November 28, 2017]. Needless to say, such a standard does not apply to the likes of the New Black Panther Party’s Malik Shabazz (currently defending a black man who attacked a protester in Charlottesville). Even as far back as debate over homosexual marriage, defending traditional marriage had become a career-ending offense, and top law firms simply would not represent the Christian position. This is a stunning break for a profession that prided itself on the principle symbolized by patriot John Adams representing British soldiers accused of the Boston Massacre.

The quasi-public Southern Poverty Law Center’s designation of “hate groups” serves the same function as proscription did in Ancient Rome, as those on the list are stripped of the ability to economically sustain themselves and designated as targets for physical attack, as in the chilling example of the attempted murders at the Family Research Council.

The most outrageous part of all of this is the double standard involved. Right-wing “militias,” whose intent is, after all, defensive, are a frequent target for law enforcement and hit pieces and “undercover investigations” for journalists. However, the openly-Communist “Redneck Revolt” Leftist vigilante group is treated to the Main Stream Media all but running its public relations campaign [What is Redneck Revolt? These Left-Wing Activists Protect Minorities With Guns, by Cristina Maza, Newsweek, December 27, 2017].

If censoring people and cutting them economically off all fail, physical violence against dissidents is the last resort for leftists. The massive MSM campaign in support of “Antifa,” who function as the paramilitaries of the cheap labor corporate establishment, is the most obvious way System journalists promote violence against conservatives. As the catastrophic decision to release the #J20 anarchists shows, left wing judges have also made the decision to let Antifa get away with such activities.

Yet there’s a subtler way journalists such as Krugman encourage violence. Hyperbolic rhetoric about “dictators” and “evil” Republicans constitute incitement to violence. And in the same way the European politicians and journalists in effect encouraged the murder of Pim Fortuyn, the violent rhetoric of #TheResistance has already incited murderous attacks against Republicans. The most notorious incident: the attempted murder of Republican Congressmen and the serious wounding of Rep. Steve Scalise by a deranged Democrat, a horrific crime which nevertheless has vanished entirely down the memory hole. And while the violence at the Unite The Right rally (instigated by Antifa and the police) has justified a sweeping crackdown on right-wing groups (even those who had nothing to do with the event), the huge death toll which can be laid at the door of groups like Black Lives Matter hasn’t stopped the group’s momentum.

Krugman pretends #TheResistance and his “pussy hat” protesters are a grassroots movement. But they are a top-down driven movement, incited by the media, funded by plutocrats, and increasingly violent in both rhetoric and tactics. They are not operating to block an “authoritarian” threat, but to preserve America’s emerging Cultural Marxist totalitarianism and above all to ensure that immigration policy continues to Elect A New People.

Donald Trump and his nationalist supporters who are confronting the Left, the cuckservatives, the globalist elite and the cheap labor lobby are the real resistance. They always have been. And Paul Krugman has always been a shill for those who hold the real power.

After all, with a record like his, there’s no other reason to explain why he still has a career.