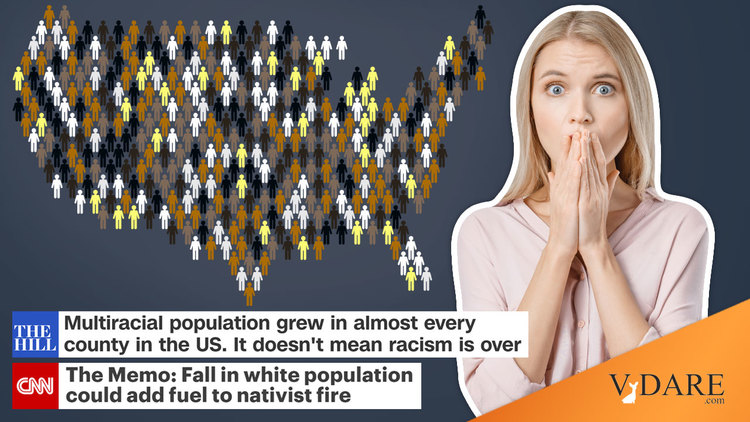 Earlier, by Steve Sailer, 2018: NYT: Ix-Nay On All the White Minority Talk

The recent news that the number of whites in the United States has declined for the first time in American history produced curious doublethink among Regime journos. Some of the cruder commentators, like Affirmative Action columnist Charles Blow [email him] and Jewish ex-neocon Jennifer Rubin [email her], simply celebrated it. But there were numerous other articles warning about the correct way to report this news. The unspoken premise: if whites learn that they are in fact being replaced and that it is being done on purpose, they might do something about it. And if whites do something about it, the failed experiment that is the U.S. might come to an end.

Remember, the party line was The Great Replacement wasn’t actually happening. To Notice that it was, in fact, happening was borderline terrorism.

However, much like the crime statistics gathered by the federal government, the data speak for themselves [The Color of Crime, New Century Foundation, 2016].

It is no longer possible to cover it up. And progressive activists are finding it hard to restrain themselves from boasting that the whole point is to make Americans’ lives worse. Simple repression only goes so far. The federal government is crawling away in disgrace from a humiliating exit from Afghanistan, but I doubt it will teach the Swamp a lesson in humility.

You might think the Regime would at least try to come up with a concrete reason why a white minority America is actually a good thing, hoping we forget about the mass riots that were taking place in formerly First World South Africa just a few weeks ago. Yet they are not even trying. In fact, some simply assert that alerting whites to their dispossession will provoke terrorism.

To quote from the stories above:

Journalists report on facts, so it's understandable that they would identify a large drop in the White population, reflected in data, as significant. Objectively speaking, it is. Yet the trap of seeing the drop in White population as the only, or even the main, story of the Census data reinforces our own insistence on seeing these transformations through a cynical lens. Pitting White America against hordes of threatening ‘colored’ people is part of a long, complex, and fraught history—one wherein changing definitions of “Whiteness” both expanded and restricted the boundaries of citizenship

“Even if the White individuals in our country are decreasing numerically, it doesn’t necessarily suggest that they’re losing any of their power. These power structures are built into our systems, historically and will still be built pretty strongly going forward,” [mixed race woman Sarah] Gaither said.

Of course, the real “power structures” benefit those who don’t identify as white. Hispanics who identify as white dropped by 53% in the last 10 years. Middle Easterners (technically still classified as white) are desperate to have their racial categorization changed. And of course, mixed-race people themselves identify with their non-white half because that’s where the money and political power is.

Furthermore, if simply providing information leads to violence or radicalism, the Regime Media, which enjoys a far bigger platform than we could dream of, should look in the mirror. It has incited hatred against whites for months. Now, some journalists are trying to hide the consequences of their provocation.

There’s been a heavy death toll against Americans of all colors. There’s been particular savagery unleashed against whites. However, blacks have also suffered.

The question is not whether “Black Lives Matter.” The question is how many black lives the NGO heads, huckster preachers, “community leaders,” and virtue-signaling liberal white women are willing to sacrifice in order to hurt ordinary people and take down some statues.

The answer seems to be: all of them. This makes Regime attempts to link patriots to “terrorism” particularly contemptible: so many journalists and NGO activists in this country have blood on their hands. The fact that they make these kinds of arguments to try to prevent debate on immigration shows utter shamelessness and sociopathy.

However, there is a grain of truth to what critics are saying, and this may underlie the real fear that Regime journalists have. They are worried people might Notice The Great Replacement while they still have time to do something about it.

Even though the white share of the electorate declined in every state before the 2020 election, whites remain the majority and will remain the majority of the electorate for some time [The Changing Racial and Ethnic Composition of the U.S. Electorate, by Ruth Igielnick and Abby Budiman, Pew Research, September 23, 2020]. This even includes California, where the white vote could account for as much as two-thirds of the upcoming recall vote on California Governor Gavin Newsom [Newsom holds only slim margin in recall vote, Berkeley IGS Poll finds, by Edward Lempinen, Berkeley News, July 27, 2021].

In other words, white voters, and Americans of all races who don’t want the country to turn into South Africa, could stop this deliberate drive for demographic transformation. It would not require radical measures. It could be done at the ballot box—and with the Biden Administration’s foreign policy fiascos, soaring inflation, and an unpopular border rush, an opportunity might come earlier than expected [Harvard/Harris Poll Shows Disapproval of Biden Immigration Policies, by Andrew Arthur, Center for Immigration Studies, June 29, 2021].

Enacting the immigration platform President Trump ran and won on in 2016 would be a beginning.

This isn’t the same as saving the country. That would require at least doing what Trump didn’t even broach. It means abolishing racial discrimination in law, i.e., Affirmative Action. It would mean reversing Critical Race Theory and other forms of anti-white indoctrination. It would mean an immigration moratorium, with perhaps a partial exception for authentic refugees suffering from political repression and who have something to contribute (like, say, the Afrikaners). However, while it isn’t sufficient, stopping immigration cold is at least necessary.

Yet who will propose such a policy? Former President Trump, presumably to embarrass Joe Biden, wants to bring in more Afghan “refugees.” Other Republican governors support this position. The Republican Party, if anything, is in danger of doubling down on the neoconservative Invade-The-World, Invite-The-World policies of the George W. Bush years.

If there’s a leader of the populist right with a sizable platform who could conceivably advance any productive program, it’s television host Tucker Carlson on Fox News—and that’s hardly the same thing as having a mass political base.

Still, the Left seems seized by paranoia. It’s like they are in a kind of race between America’s awakening patriotic consciousness and the possibly irreversible demographic transformation of the electorate. It’s as if they know they removed the mask too early with their repressive measures and overt anti-white rhetoric.

The Left’s solution: to swamp the Historic American Nation as soon as possible. Barring GOP opposition, such a program may well succeed. While President Biden is hardly covering himself in glory, the Republicans aren’t presenting any real alternative.

Ultimately, all of this is really about what defines a nation. In theory, the military went to war after 9/11 to defend America after a terrorist attack. Now, we find out that it is our duty to invite every Afghan who wants to come to the United States, displace those who disproportionately fought the war, and wage a war on “terrorism” at home because some people have convinced themselves that the Mostly Peaceful Protest on January 6 was worse than the World Trade Center and Pentagon attacks in 2001 [MSNBC: Jan. 6 was worse than 9/11, by Becket Adams, Washington Examiner, July 7, 2021].

What, exactly, is the military supposed to be defending? What, precisely, defines a nation that celebrates as its highest aspiration the dispossession of its core population?

If what’s happening now isn’t treason, it’s only because there is no longer any nation left to betray.