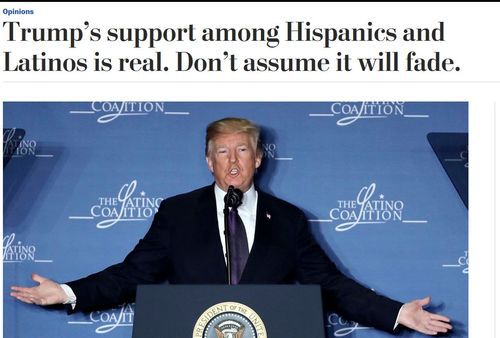 MEMO FROM MIDDLE AMERICA: No, Virginia (Dare), Hispanics Don’t All Hate Donald Trump. And Hispandering Won’t Get Him More Of Their Votes

Earlier, from Ann Coulter In 2016: No More GOP Pandering—Trump Asking Minorities To Vote Like Americans!

Two recent reports that tease out the demographics of the Hispanic vote show that the GOP needn’t Hispander on immigration to keep the very respectable 29 percent the party won in 2018.

The New York Times and The Washington Post confirm what Heather MacDonald and I have been saying for years: Hispandering doesn’t work—and isn’t necessary, because Hispanics don’t care as much about immigration as brainwashed elites in the GOP think (because the elites listen to the Left and the Main Stream Media).

That news is important not just because it should stop the GOP from surrendering the Historic American Nation to the massive wave of “migrants” sloshing into the country at a rate of 100,000 a month, as of March [Southwest Border Migration FY 2019, CBP.gov]. It’s also important because Hispanic voters will outnumber black voters in the 2020 national election. [An early look at the 2020 electorate, by Anthony Cilluffo and Richard Fry, Pew Research Center, January 30, 2019]

But even with that historic  statistic, President Trump and the GOP can stand firm on immigration.

Writing in the New York Times, Thomas B. Edsall [email him]explained that “future success” for the party of Open Borders “depends on the crucial—but unsettled—allegiance of the nation’s growing Hispanic electorate,” but that Hispanics don’t offer Democrats black-majority levels of support. [Why Aren’t Democrats Winning the Hispanic Vote 80-20 or 90-10’,  April 3, 2019]

The numbers are frustrating the Democrats, Edsall writes:

[Democrats are] equally worried about turnout—at a time when many thought that President Trump’s rhetoric and policies would produce impressive gains among Latino voters for the Democratic Party.

Translation: After all our Trump-bashing, and all the anti-Trump bias of the MSM, we can’t convince all Hispanic voters to hate Trump!  In fact, a not insignificant minority of the Hispanic Vote votes Republican.

In other words, the GOP lost none of the Hispanic vote between Trump’s victory and the 2018 midterms.

Between 1986 to 2014, Edsall writes, the gap between total Latino voters and actual turnout widened, although for 2018 it appears that some states did produce a higher Hispanic vote.

While Democratic support among Hispanics has improved over the past decade, from the low 60s to the high 60s, there is evidence suggesting that those gains cannot be relied upon in future elections. …

Latinos’ partisan loyalties are much less hard and fast than, say, those of either African-Americans or white evangelicals.

An example: Florida, where Rick Scott won the Senate race and Ron DeSantis won the governorship in November. Democrats edged Republicans among Hispanics by 54 to 44. That 10-point difference is much less than the 20-point Democratic margin of victory in Florida in 2014. The Scott and DeSantis campaigns worked hard and “campaigned almost daily in Hispanic precincts,” Edsall explained “while their Democratic opponents, Bill Nelson and Andrew Gillum, took the Hispanic vote for granted.”

Of course, she told Edsall, some conservative, anti-communist Latinos have always voted Republican; 40 percent went for George W. Bush in 2004. There was an attempt by some pollsters to claim a Bush Hispanic share of 44%, but this was decisively refuted by Steve Sailer. a figure our own Steve Sailer disputes. Reagan also enjoyed considerable support from Hispanics, yet Michelson is somewhat amazed that Latinos don’t froth at the mouth at the very mention of Donald Trump.

I think many Democrats are continually perplexed by this—that there could be Latino voters who are willing to support a president (or candidate) like Trump whose rhetoric and policies are so clearly anti-Latino and racist.

Most of Trump’s Hispanic support nationally, Edsall reported, was “among men and among the affluent—40 percent for both—and among men without college degrees, at 39 percent,” meaning within their voting bloc, the patterns of pro-Trump voters were similar to those of whites.

But on to the real issue for the historic American nation, immigration, where Edsall backs up MacDonald. GOP “strategists,” and of course, the Left and its media auxiliary, have told the GOP for years it must tack left on immigration or lose what Hispanic support it has.

But Edsall pointed to another Pew report in October 2018 that showed otherwise:

[More Latinos Have Serious Concerns About Their Place in America Under Trump, by Mark Hugo Lopez, Ana Gonzalez-Barrera and Jens Manuel Krogstad, October 25, 2018]

So nearly 75 percent of Latinos do not support increasing immigration. Did you catch that, GOP?

As for the border wall, three quarters of Hispanics are against it and 20 percent are for it.

Edsall’s findings comport with those from David Byler reported in the Washington Post. [Trump’s support among Hispanics and Latinos is real. Don’t assume it will fade, March 5, 2019]

Every few months, a strange thing happens in the news: President Trump says something negative about Hispanics and Latinos or makes a new push for his border wall. Someone then checks the polls and finds that his approval is well above zero percent with Hispanics and Latinos, and every journalist marvels that those numbers aren’t lower.

So Byler—practicing some real journalism—mined the data to find out why a Hispanic would support Trump.

The data suggests that Republicans have a substantial, semi-soft floor with Hispanic and Latino voters and that Trump has basically hit it. Moreover, this floor seems to build at least in part on identity and ideology, meaning that Democrats might not be able to eat into it by simply emphasizing immigration. ...

[I]n recent, high-turnout elections, Republicans seem to have hit some sort of floor around a quarter or a third of the Latino and Hispanic vote.

That floor, 25 to 30 percent of Hispanics, could make the difference in a close election.

But why does the floor exist at all?

Part of this is from national origins.  Most American Hispanics are of Mexican ancestry.  But even among Mexicans there is demographic and regional diversity.  Mexican immigrants usually congregate with other immigrants from their home state or region in Mexico.

Besides Mexican-ancestry people, there are substantial quantities of Hispanics from Puerto Rican, Cuban, Central American and South American backgrounds.  And nowadays, there are more people from mixed-Latino backgrounds.

National origin is one factor. Another, Byler wrote, is generational:

Self-identified Hispanics who are third-generation or higher are more likely than others to self-describe primarily as American rather than Hispanic/Latino, less likely to say they have felt discriminated against because of their background and feel less connected to their country of origin.

In other words, Hispanics whose families have been in the country longer identify more with the United States than their ancestral homelands, which is unsurprising.

As with white Anglos, the gender, religious, and urban-rural divides might also explain the floor.

Rural Hispanics “moved a bit toward Trump in 2016,” Byler wrote.

And, as with whites, “there’s a gender gap in Hispanic voting, too. Democrats won both Hispanic men and women in 2018, but Hispanic men were more likely to vote for Republicans than women were.”

Like Edsall, Byler reported that immigration is not the key to winning the Hispanic vote: “Immigration alone doesn’t seem to be a silver bullet for winning Hispanic and Latino votes.” Polls show that other issues—education, the economy and health care—are more important to Hispanics than immigration. Again, that’s what Mac Donald wrote in 2012: Hispanics like liberal Democratic policies.

[I]immigration isn’t radioactive to every Hispanic or Latino voter. Democrats who dream of locking up 90 percent of the Latino and Hispanic vote, turning them into a base comparable to African American voters, need to get over the idea that they can win that base just by emphasizing immigration.

That truth is even more important given what Nate Cohn wrote in 2014. Increasing numbers of Hispanics view themselves as white, which suggests that “Hispanic” doesn’t have a fixed meaning. [More Hispanics Declaring Themselves White, NYT,  May 21, 2014]

Indeed, Hispanic is a phony category we shouldn’t have introduced into the census. But that aside, the news here is that Hispanics are not an impenetrable, monolithic voting bloc, and GOP candidates can keep their 25-30 percent of the Latino vote without surrendering on immigration.

The obnoxious Hispandering of the Bush-McCain wing of the GOP on immigration is not the way to go.

Here’s a better idea: Appeal to Hispanics as Americans, with American interests.

We might be surprised at the number who appreciate it and vote accordingly.