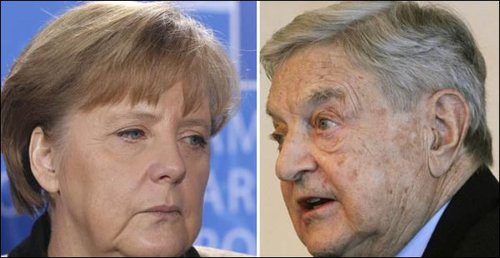 Back in August, in a process laid out in Refugee Resettlement Watch’s accurately-titled essay Merkel has gone mad!

German Chancellor Angela Merkel…announced that any Syrian who gets to Germany can apply for asylum there…the country has decided to suspend a European Union rule, called the Dublin Regulation, which says refugees are supposed to stay in the first European country of arrival until their asylum claims are processed.

The consequence inevitably was an enormous immivasion as enterprising individuals from as far away as Afghanistan set out to colonize Germany, confidently expecting to be able to masquerade as Syrians. As many as 1.5 million are now expected to arrive this year

Merkel’s primary policy responses have highly significant: to try to suppress dissent (even begging Facebook's Mark Zuckerberg for help) and to make a deal with Turkey.

She’ll get the Turks to stop the Syrian invasion of Europe! In return, she’ll merely give 79 million Muslim Turks the right to move to Europe.

(Merkel has apparently agreed to press the EU to drop the current visa requirement on Turks and reverse her opposition to Turkish EU membership.) The Turkish deal would actually reinforce rather than ameliorate what she has done.

Objectively, what is happening here is that, after almost a decade as Chancellor of Germany, Merkel has decided to engineer the Muslimization of Germany. While most of the current influx consists of single young men, family reunification is expected to bring in 4 to 8 family members. Merkel’s policy means the Mexifornication of her country.

Why is she doing this? Germany has plenty of experience with how difficult Muslim immigrants can be—Thilo Sarrazin’s book Germany Abolishes Itself has sold an amount in Germany equivalent to SIX MILLION copies in America. (No American publisher has ever brought out an English language version, predictably).

...confused liberal ideology with demographic and cultural reality…. as a result of Merkel’s determination to pretend Germans and Syrians are interchangeable, the refugee policy of Europe’s economic powerhouse is collapsing around her.

Steve Sailer, since he keeps referring to “Merkel’s Boner”, seems to think she has made a simple mistake. However he reports a thesis from the UK newspaper The Guardian

Merkel may be looking for an exit strategy that earns her recognition among the international community of political leaders whose discourse she seems increasingly to prefer over the narrow-minded bickering among her local party officials and parliamentary members.

Merkel herself mumbled another explanation this week:

…the influx of asylum seekers into Germany was part of the fallout from globalisation, which, she noted, had served Germany well in terms of exports and jobs. "And now we're witnessing an inverse movement: globalisation is coming to us… We will have to accept a certain degree of legal immigration, that's globalisation... In the era of the smartphone we cannot shut ourselves away... people know full well how we live in Europe,"

None of this adequately explains why, in the Fall of 2015, its leader should suddenly connive at the obliteration of a nation which has been a coherent entity since before the time of Christ.

Based on our recent experience in this country I think we can ask our German cousins a helpful question:

Have you thought about the possibility that Merkel has been bribed?

About a month ago Soros caused to be published (in a number of places) Here’s my plan to solve the asylum chaos MarketWatch Sept 29, 2015

The EU needs a comprehensive plan to respond to the crisis, one that reasserts effective governance over the flows of asylum-seekers so that they take place in a safe, orderly way, and at a pace that reflects Europe’s capacity to absorb them… the EU has to accept at least a million asylum-seekers annually for the foreseeable future.

(My emphasis) Why should it be assumed that the wars in the Middle East will go on for the “foreseeable future”? And even if they did, as Soros himself says in the essay

It is less disruptive and much less expensive to maintain potential asylum-seekers in or close to their present location.

Soros is not in fact talking about caring for refugees here. Instead he is seizing on a pretext to advocate the acceptance of nation-destroying inflows of aliens. This is eerily similar to the Obama Administration’s Kidinvasion stratagem, utilizing purported trouble in Central America to accelerate the wholesale admission of Hispanics to America.

Soros of course has long been involved in financing various opinion-molding efforts to undermine the society which gave him shelter and facilitated him becoming wealthy: see Memo From Middle America| More Soros-Funded Pollaganda About Evangelicals And Amnesty. But recently he seems to have shifted to financing direct action. There are reports that he spent $30 million to stir up trouble in Ferguson as Steve Sailer discussed in Hi-Lo Tag Team in Action: Soros Bankrolled Ferguson Pogrom. Will He Pay Reparations?

Could the 85 year old Soros be an old man in a hurry?

We proles of course find it difficult to grasp that the affairs of nations can be diverted by bribery. But I believe it is actually quite common. Some years ago I read Stanley Payne’s Franco and Hitler: Spain, Germany, and World War II. This discusses the interesting question of why Franco’s Spain, despite being morally indebted to Nazi Germany for crucial help in the recently-concluded Civil War and very anti-Communist did not join the Axis.

An important reason was that the British, to whom this would have been a strategic nightmare, paid a senior Spanish General the then enormous sum of 2 million pounds sterling to throw his influence against joining the war.

The spectacle of an elected politician doing something totally against the preferences of her own base and manifestly in contradiction to the interests of her nation requires a powerful explanation.

Planets such as Pluto were discovered by noting that other planets orbiting in different paths than would have been predicted considering known gravity sources. On Wall Street, the egregious corporate looting via the option backdating mechanism a decade ago was detected because of the strange pattern of firms claiming to have issued large quantities of options immediately before big stock price moves.

Unfortunately for America, exhibit A for this is the behavior of the American Republican Party as I argued in Why Has GOP Leadership Spurned Base, Election and Constitution? Severe ADD (Adelson Dollar Disorder)!

And why should George Soros and/or men of similar wealth and inclinations commit such an atrocity?

They would probably allege deep sympathy with those needing refuge.

I would instead propose the late Larry Auster’s formulation:

is being played out in their minds.

Refugee RacketCamp Of The Saints
<< Previous
Next >>
LATEST