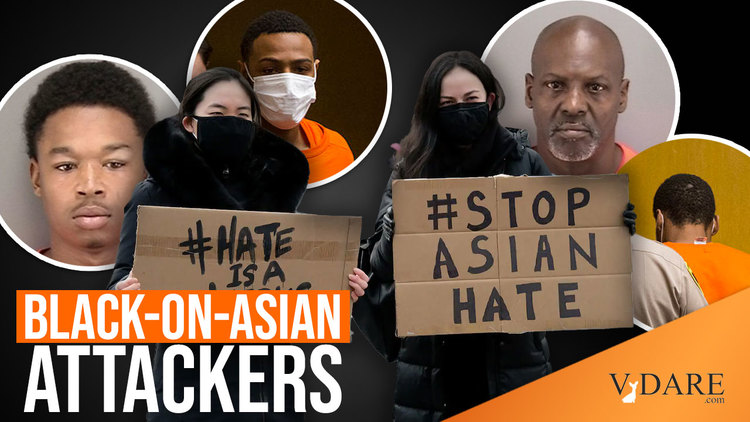 Earlier: Coalition of the Fringes: Asians Join With Blacks To Protest "Racism" AKA Black Attacks On Asians

Pssst. Can I have your attention, please? I'm going to share a little secret that liberal "people of color" and their public relations agents in the media don't want you to know. The recent crime wave against Asians in America's big cities is not the fault of Donald Trump, MAGA activists, conservative talk radio, or white people. It's the fault of the perpetrators and the perpetrators alone—most of whom happen to be thugs "of color."

Let's pop the delusional bubble of left-wing Asians who marched this weekend in New York City, Oakland and San Francisco in "unity" protests against "white supremacy." These "wokesters" blame "anti-Asian bias" created by an imagined backlash by imagined "white supremacists" against China because of COVID-19. Donning "Black and Asian unity" T-shirts, they embraced the self-defeating attitude of Oakland organizer Eddy Zheng, who wheedled: "Supporting our Asian community is not about dividing us. This support is for all of us suffering under white supremacy. We need to understand that so we can triumph and have public and personal safety."

Reality check: Just last week in Vallejo, California, Filipino-American store owner Marc Quidit was shot four times in the leg by a gang of armed robbers. They were black.

Two weeks ago, in Oakland's Chinatown, a 91-year-old Asian man was assaulted by an assailant amidst a crime wave of more than 20 robberies and violent attacks in that neighborhood. The attacker wasn't a white-hooded white man in a KKK robe. He was a masked black man in a black hoodie.

In Daly City, California, an 84-year-old Thai grandfather died after a brutal attack while on a daytime walk in his neighborhood. His attacker was a teenage black street criminal.

Viral videos have exposed several vicious attacks on elderly Asian subway riders and pedestrians in New York City since last fall. An inconvenient detail that anyone with functional eyes can see: The perpetrators in the security camera footage aren't wearing MAGA hats. They don't have flaming crosses in hand. Inconveniently for the "defund the police" hipsters, the opportunists robbing, punching and shooting Asians on those videos aren't white people. They are black—and that's just plain fact.

More facts: Federal Bureau of Justice statistics data show that of nearly 600,000 violent interracial victimizations involving blacks and whites, black suspects committed 537,204 interracial felonies (not including homicides), or 90%, and whites committed 56,394 of them, or less than 10%. The Red Elephants blog points out that black perpetrators are also overrepresented among all perpetrators of hate crimes—by 50%—according to the most recent Justice Department data from 2017. Whites are underrepresented by 24%.

You never hear these facts from the national propagandists in the so-called mainstream media. It's a sin of omission that amounts to journalistic malpractice. The leftist Trump Derangement Syndrome sufferers have zero evidence that the thugs robbing and punching and murdering vulnerable elderly Asians have ever cared one iota about politics, COVID-19, race or Donald Trump. They have zero evidence that these street attacks were inspired by "anti-Asian hate"—as opposed to pure opportunism, criminal malice or plain evil.

When you elect soft-on-crime politicians and prosecutors, you get more crime. When you defund and demonize the police, all innocent citizens are unsafe—whatever their color.

Blaming whitey may get you a few virtue-signaling points, but at what price in blood? What's truly insane is that Asian-American liberals are marching arm and arm with the very dangerous zealots whose policies incentivized these street crimes against the vulnerable and defenseless in the first place. Remember: What you permit, you promote. What you allow, you encourage. What you condone, you own.