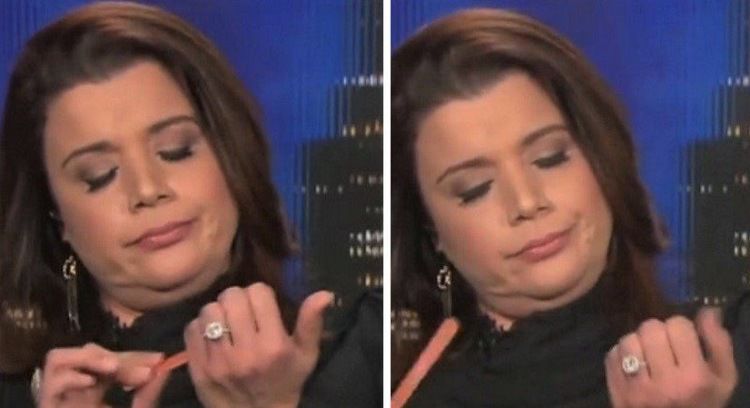 Nope, it's not obstreperously obnoxious Jim Acosta of CNN, who embodies the disingenuous sanctimony of Emma Lazarus utopianists.

It's not spittle-flecked Geraldo Rivera, who personifies ethnic identity narcissism.

And it's not the lying liars of Time magazine, whose manufactured cover art fable of Yanela Sanchez (the illegal immigrant poster child for "separated families" at the border who was never actually separated from her mother) epitomizes Trump-deranged "fake news."

If I had to name just one America-sabotaging mouthpiece who symbolizes the foulest of the Fourth Estate, it would be Ana Navarro-Cardenas, who last week was an honored front-row guest at Democratic presidential candidate and former veep Joe Biden's Latino fundraiser in Miami and is now cheerleading for President Donald Trump's impeachment.

As I report in "Open Borders Inc.," Navarro-Cardenas [Tweet her] is billed as a Republican strategist, but voted for Hillary Clinton, cuddled up to Bill Clinton on a Florida golf course and climbed up the pundit ladder bashing mainstream Republicans at every turn. That's the only winning strategy this made-for-TV "strategist" has ever had. The Nicaraguan-born loudmouth came to the U.S. with her family in 1980 and was amnestied under Ronald Reagan's 1986 mass pardon for lawbreakers. She fought immigrant deportations as a law student and worked for foreign special interests busting open our borders even wider.

In 1997, she was a foreign agent. Literally. Her bio describes her as "a special advisor to the Government of Nicaragua and in that role, she was one of the primary advocates for NACARA (Nicaraguan Adjustment and Central American Relief Act)." Under the law, Nicaraguans who had lived in the U.S. illegally since 1995, along with their spouses and unmarried children, were automatically granted permanent resident status (and the coveted path to American citizenship) as long as they applied by April 1, 2000. Certain Cubans, El Salvadorans, Guatemalans and Eastern Europeans who had entered illegally and/or faced deportation were also tossed into the amnesty. Nearly 1 million lawbreakers received NACARA benefits.

Navarro-Cardenas served on the Hispanic Advisory Council for amnesty traitor John McCain's failed 2008 presidential bid and secured a national Hispanic co-chair position for liberal Republican Jon Huntsman's 2012 flameout of a presidential bid. She served as a "confidante" of former Florida Gov. Jeb Bush (the nitwit who proclaimed that illegal immigration is an "act of love") and held a position as his state director of immigration policy until it was discovered that she did not have a law license. Then she advised Jeb's low-energy 2016 presidential campaign until it ran out of gas.

Rude and crude, she racked up paid gigs at CNN, CNN Espanol, Telemundo and ABC's "The View."

You may remember one of her most infamous stunts: Pulling out a nail file and feigning boredom during an immigration debate on CNN's "Cuomo Prime Time" show. Host Chris Cuomo introduced the segment by accusing Trump of "creating the fiction of a brown menace" and concocting the bloody consequences of open borders on Jan. 9, 2019. Exactly two weeks earlier, patriotic legal immigrant and Newman, California, police officer Cpl. Ronil Singh had been executed by a Mexican gangbanger here illegally. While Trump supporter Steve Cortes called attention to the victims of illegal immigrant crime, Navarro-Cardenas sighed, rolled her eyes, and exploded when Cortes had the audacity to call her a "leftist." Ignoring Singh's sacrifice, she whined: "I'm so tired of you calling me leftist just because you want to compromise your values."

Playing the victim while disrespecting the real victims is par for the Open Borders Inc. course.

Currently, Cardenas and his open borders GOP buddies are lobbying hard in Florida for illegal immigrant driver's licenses and against the E-Verify employer database.

"Amnesty Ana" echoed her hubby on CNN, hissing that Trump was a "racist pig" for memorializing the two dead American cops slain by Bracamontes, who cackled upon his convictions and bragged:

"I wish I had killed more of the motherf---ers."

The next time these media mouthpieces of Open Borders Inc. lecture about civility, compassion and "who we are," remember where they stand—on the side of foreign governments over America, fame over safety, illegal immigrant criminals over hero police officers, profits over sovereignty and impeachment insanity above all else.