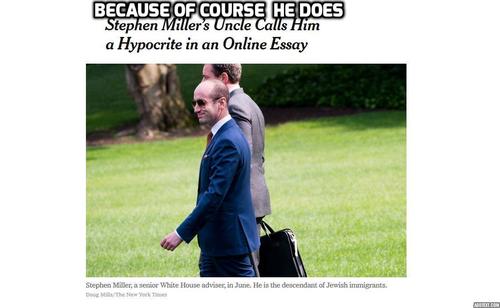 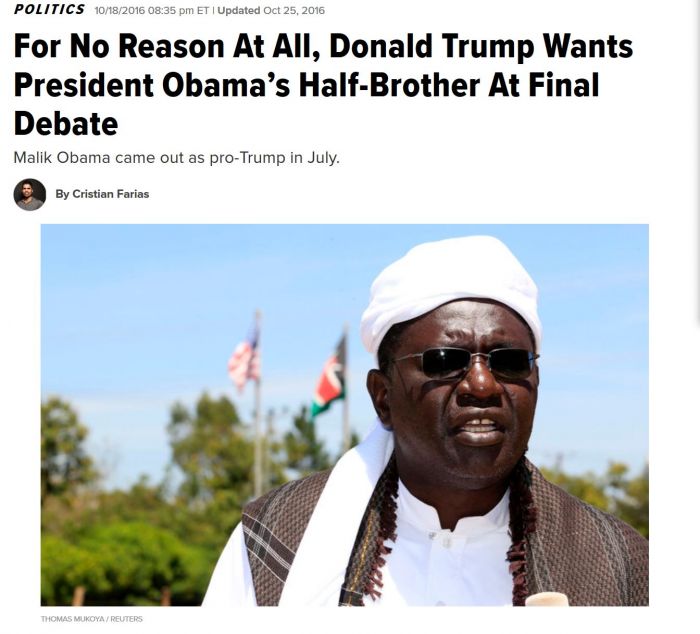 It's quite simple: Some political relatives are more equal than others.

Agenda-driven journalists love to exploit familial dysfunction when a prominent politician is conservative and his or her kinfolk espouse liberal views. When a vengeful offspring, sibling, cousin or distant relation wants to wreak havoc, instant fame and adoration are just a tweet or call away. The media schadenfreude over such bloody bloodline battles is thicker than California wildfire smoke.

By contrast, relatives who openly challenge powerful Democrats are dismissed as gadflies and publicity hounds. Remember when Barack Obama's half-brother Malik criticized his younger sibling over his coddling of corrupt Hillary Clinton, support for gay marriage and inattention to Kenya and his family overseas?

Left-wing Vox responded by calling Malik a "somewhat scammy opportunist." A GQ writer decried "the inherent seediness of on-screen family dysfunction," declared that "Malik has nothing to do with anything," and condemned the "nonsensical stunt." The Huffington Post was befuddled that Donald Trump invited Malik to the third presidential debate "for no reason at all."

"I have watched with dismay and increasing horror as my nephew, who is an educated man and well aware of his heritage, has become the architect of immigration policies that repudiate the very foundation of our family's life in this country." 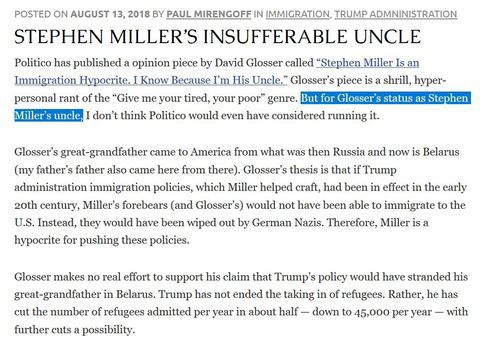 Beyond his own personal history and volunteer work, Glosser has no expertise in immigration law or analytical understanding of the systemic impact of our immigration failures on American sovereignty, well-being and economic determination.

Miller, by contrast, spent a dozen years on Capitol Hill mastering every aspect of immigration policy—border security, sanctuary cities, deportation, asylum and refugee programs, and the impact of foreign guest worker visas on wages, for starters—before taking on a senior policy advisor role for the Trump transition team and White House. He is a longtime vocal proponent of serious, comprehensive immigration enforcement reform from top to bottom—including a long overdue rethinking of our chain migration system, which rewards familial ties over merit and skills.

Glosser thinks that by pointing out that their family entered America through chain migration, Miller is somehow an "immigration hypocrite." This is one of the most inane arguments of the open borders lobby. And there's a lot of inanity to choose from, my friends.

Just because you benefit from a certain government policy, it doesn't mean you should be obligated to support that policy in perpetuity. The nation's modern chain migration system was formally created in 1952 and expanded radically by Congress in 1965 and 1990. New immigrants can now sponsor their entire extended families: parents, spouses, adult children and their children, and siblings and their children. The unrelenting influx has undermined the federal government's ability to properly vet new immigrants, police fraud, prioritize skilled labor and assimilate chain beneficiaries.

Good-faith disagreement is one thing. But Glosser's diatribes are so filled with rage that I get the sense his animosity is rooted in something far deeper than ideological dissent. Families are like that, whether they include famous public figures in them or not. So why is it that the high and mighty arbiters of "news" bestow some relatives with absolute moral authority while others are summarily dismissed as attention-seekers?

That's the theory of political relative relativity in action, proving the irrefutable existence of media bias, operating under the insufferable pretense of neutrality.

To quote the Slate snobs right back at them: Ugh.

Michelle Malkin [email her] is the author of Invasion: How America Still Welcomes Terrorists, Criminals, and Other Foreign Menaces to Our Shores. Click here for Peter Brimelow’s review. Click here for Michelle Malkin's website. Michelle Malkin is also author of Unhinged: Exposing Liberals Gone Wild, Culture of Corruption: Obama and his Team of Tax Cheats, Crooks & Cronies, and Who Built That: Awe-Inspiring Stories of American Tinkerpreneurs