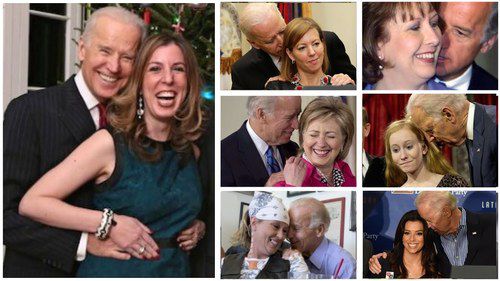 Image above is from a video compilation of Joe Biden's hands-on approach to socializing publicly with women.

If you're a sleazy male Democrat, you can always count on Nancy Pelosi to run interference for you and your pervy proclivities. While she has soaked up plaudits as a champion for women (most recently as the VH1 Trailblazer Honors recipient last month for International Women's Day), what she really deserves is Cheerleader of the Year Award from the Democratic Bad Boys Club.

The latest beneficiary of her soft-glove treatment is former Vice President and potential 2020 Democratic presidential aspirant Joe Biden—a.k.a. the veep creep. She gently advised him to "pretend you have a cold" and joked during a Politico interview that he should emulate her "straight-arm" policy of keeping distance from others. Giggle, giggle, blink, blink. Reporters laughed along.

(And these are the same people who mock straight-arrow Vice President Mike Pence of taking extra precaution around women!)

For years, alert conservative women have so relentlessly documented freaky Uncle Joe's penchant for pawing members of the gentler sex that even mainstream media outlets were forced to pay attention. The cringe-tastic headlines and disturbing photo montages, which featured several young girls held hostage between Biden's claws, could no longer be ignored:

But not until two Democratic women came forward this past week was Biden forced to respond. Nevada Democrat Lucy Flores accused the hair-sniffing 76-year-old Beltway barnacle of making her feel "uneasy, gross, and confused" at a campaign event in 2014. Former Connecticut Democratic aide Amy Lappos described how Biden "rubbed noses with me" at a private fundraiser in 2009 after grabbing her face with both hands. It was "absolutely disrespectful of my personal boundaries."

If these were women accusing Republican men of such behavior, Pelosi would be issuing scathing recriminations, not jokey etiquette tips. But Nan's nonchalance about her fellow Democrats' invasions of personal space is par for her cad-supporting course. I remind my readers of Pelosi's twisted track record:

In 2017, she defiantly stood by accused groper John Conyers calling him an "icon" who "has done a great deal to protect women" and downplaying his secret sexual harassment settlement with a former female staffer—one of three former employees alleging sexual abuse. 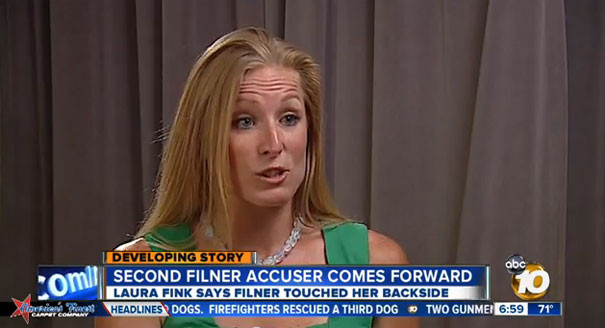 In 2013, Pelosi refused to call on her old pal and former Democratic mayor Bob Filner of San Diego to resign after multiple women accused him of harassment and assault. One staffer claimed Filner had ordered her to "work without her panties on." Others alleged he forcibly kissed them. Another said she had contacted Democratic higher-ups in California about a half-dozen women. "What goes on in San Diego is up to the people of San Diego. I'm not here to make any judgments," Pelosi declared.

In 2011, Pelosi refused to condemn disgraced Rep. Anthony Weiner until his interactions with an underage girl in Delaware were exposed by conservative bloggers and confirmed by police. Only then did Pelosi rush from behind to lead the demands for Weiner's resignation.

Also in 2011, seven-term liberal congressman and former Democratic Rep. David Wu of Oregon was exposed by his own staffers, who revolted against their drunk-texting, tiger costume-wearing boss and pressured him to seek psychiatric help. House Democratic leaders, desperate to keep one of their own in office, ignored the pleas. Only after The Oregonian newspaper published allegations by a teenage girl who had complained for months to apathetic Capitol Hill offices of an "unwanted sexual encounter" with Wu did Pelosi make a show of calling for a House Ethics Committee investigation—which went, you guessed it, nowhere.

Yet, just days ago in The New York Times, feminist Tina Brown heaped praise on creep-enabler Pelosi's unique leadership tied to her XX chromosomes—a woman's "rich ways of knowing" that rejects "traditional male paths of ejaculatory self-elevation." Reality does not match the rhetoric.

Michelle Malkin [email her] is host of "Michelle Malkin Investigates" on CRTV.com. She is the author of Invasion: How America Still Welcomes Terrorists, Criminals, and Other Foreign Menaces to Our Shores. Click here for Peter Brimelow’s