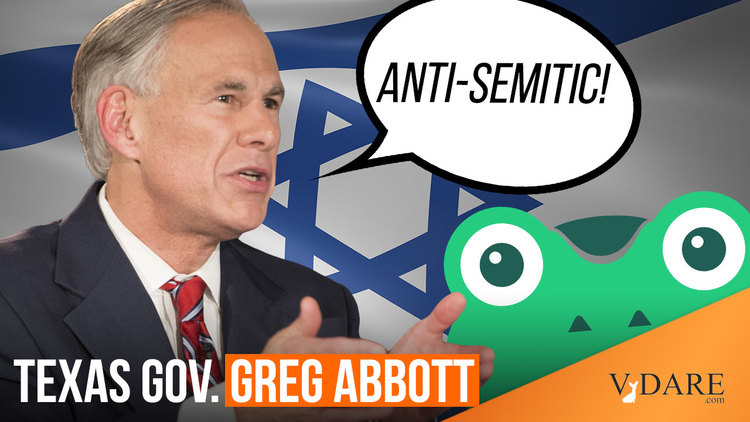 Earlier: "Then They Came For Christians: A Warning"—Gab's Andrew Torba On Christophobia And Tech Totalitarianism

Everything you need to know about the fair-weather "friends" of the First Amendment can be found by examining the phonies on the left and right who hurl reckless charges of "anti-Semitism" to stigmatize and silence their political foes.

Texas Gov. Greg Abbott, a Republican, viciously employed this odious tactic last week against the free speech platform, Gab.com, and its 4 million users. Flanked by two GOP state legislators sponsoring a bill to support a state-supported Holocaust and genocide commission, he declared, "Anti-Semitic platforms like Gab have no place in Texas and certainly do not represent Texas values."

This is the same presidential aspirant who just two weeks ago had launched a Lone Star state war on Big Tech censorship. In a widely covered press event, Abbott called Silicon Valley's deplatforming of conservatives "un-American, un-Texan, and unacceptable."

Abbott's whiplash-inducing pivot "makes no sense," Jewish online activist and Gab user Amy Mek of the RAIR Foundation told me. Mek and her family were doxxed by left-wing operatives for her outspoken criticism of Islamic sharia law and terrorism. Hounded by the Southern Poverty Law Center and Huffington Post, and suspended by Twitter for her peaceful political speech, she found a welcoming community at Gab. "I support this Christian-run business," said Mek. And I "thank them for creating a free-speech platform."

Jewish journalist and "most banned woman in the world" Laura Loomer voiced similar support: "As a free speech platform, the fact that Gab allows for even the most offensive speech to exist on its platform is a testament to its commitment to being a true free speech platform."

So, why did Abbott demonize this "digital Noah's Ark" (as devout Christian founder Andrew Torba describes it) for censored conservatives and dissidents—especially when every liberal Big Tech platform has banned the former president of the United States?

Then, there's the pander factor: independent journalist and lawyer Glenn Greenwald reported that Abbott was "the prime cheerleader for a bill in Texas—ultimately ruled unconstitutional—to ban the state from hiring anyone who refuses to pledge support for Israel (by promising not to privately boycott them). He's an enemy of free speech." The Israeli government has lobbied governors and state legislatures across America to adopt these anti-boycott, anti-free speech laws. That's not "America First."

Finally, there's the power play. The Texas Republican Party itself has a verified Gab account and backs the platform. The state party is led by Abbott's chief political rival and enormously populist party chairman, Allen West. What better way to neutralize a potential primary challenge than to level the nuclear "anti-Semitism" bomb?

As Nick Fuentes, AFPAC organizer and "America First" host, put it: "Gab vs. Abbott is the ultimate 'America First' litmus test." He's now banned from almost 30 platforms, including YouTube, DLive and Clubhouse, over the very same trumped-up charges of "anti-Semitism" wielded against Gab and Torba. Last week, the mere mention of his name as a hashtag was banned on TikTok and Instagram: "I am being systematically erased from the digital world and with me goes the possibility of meaningful dissent against the political establishment in America."

We're all in this together. When I accurately called liberal billionaire George Soros a "globalist," the CEO of the Anti-Defamation League Jonathan Greenblatt railed that I was using "a term that right-wing extremists and white supremacists use as a codeword for 'Jew.'"

When I named several Soros-subsidized, tax-exempt nonprofit "charities" flooding our country with illegal immigrant criminals and cheap labor while on my "Open Borders, Inc." book tour, Media Matters of America (itself a Soros-backed hate machine) accused me of deploying a "common anti-Semitic trope."

When I documented the vast reach and power the United Nations has to dump hundreds of thousands of refugees across America's heartland, Media Matters blared in a headline that I pushed an "anti-Semitic conspiracy theory that motivated Tree of Life synagogue shooter."

When I stood up for intelligent and polite young men on college campuses who challenged Turning Point USA speakers about their defense of open borders, green card giveaways, unconditional foreign aid to Israel and the bombing of the USS Liberty, I was denounced by establishment conservatives as insane, fame-seeking, money-grubbing, white supremacist-flirting, "Holocaust Denial"-promoting, and, of course, "anti-Semitic."

My Jewish husband got a huge chuckle out of all of that. And it goes on. When I spoke at the first American First Political Action Conference last year and pointed out how "anti-Semitism" had become a "useless, meaningless term and everybody knows it," the Jewish News Syndicate gathered all the shrill shills' demands to "shun" and "disavow" me under the headline:

"Conservatives rebuke Malkin for questioning what is 'anti-Semitic.'"

Questioning, naming and debating are not acts of "anti-Semitism." They are acts of honest journalism and patriotism. The smear machine can and will be defeated by a united front of dissidents who preach and practice Gab's motto—"Speak Freely"—without fear or apology.