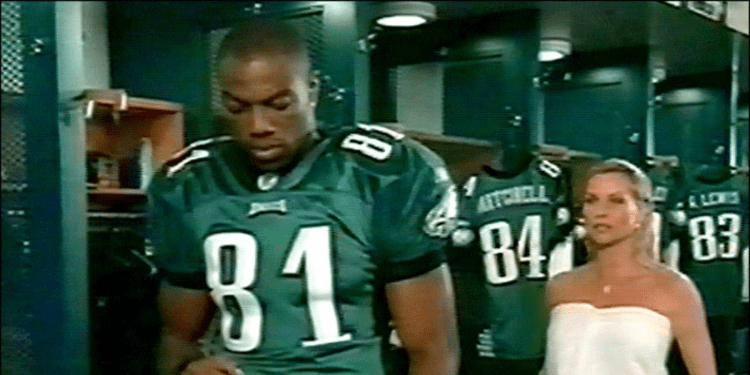 Morality Not The Only Target on Monday Night Football

ABC Sports last week took careful aim at the "moral issues" that are said to have driven this month's national election and delivered a good swift kick to their dentures on national television.

The main reaction from viewers and the professional "family values" lobby has been to denounce the nudity and clearly implied sex of the now-notorious ad that promoted last week's Monday Night Football game. That's all well and good, but there was more going on in the ad that no one will mention—race.

The ad shows blonde white sexpot Nicollette Sheridan of the steamy "Desperate Housewives" series smooching up to black football star Terrell Owens in the locker room of the Philadelphia Eagles. Then the young lady drops her bath towel and jumps into Mr. Owens' not-exactly recalcitrant arms.

In the aftermath of the similar reaction to CBS's showing of the Janet Jackson-Justin Timberlake flap during the Super Bowl last February, there can be little doubt the ABC ad was not just a blunder.

It was an intentional act of moral subversion.

It was filmed the Friday before, and in the aftermath of all the jabber about "moral issues" in the election, it ought to be transparent that it was intended as an act of political-cultural subversion as well.

In the CBS incident, Miss Jackson exposed her breast on camera during a performance with Mr. Timberlake.  The Federal Communications Commission fined CBS, which broadcast the Super Bowl, the piddling sum of $550,000—little more than lunch money, of course, for the big networks and hardly a deterrent to similar smacks at good taste in the future.

But taste and morality are by no means the ad's only targets.

Like the Jackson-Timberlake performance, the Owens-Sheridan ad was interracial and brazenly so—if only morals and taste had been the targets, the producers could easily have found white actresses who are less obviously Nordic than the golden-locked Miss Sheridan, but Nordic is what the ad's producers no doubt wanted.

For that matter, if you only wanted to take a swipe at morals and taste, you could find a black woman to rip her towel off or replace Mr. Owens with a famous white athlete (there are still a few).

But that wasn't the point, was it? The point was not just to hurl a pie in the face of morals and good taste but also of white racial and cultural identity. The message of the ad was that white women are eager to have sex with black men, that they should be eager, and that black men should take them up on it.

So far only one voice has mentioned the ad's racial meaning and denounced its "insensitivity" (to blacks)—that of black Indianapolis Colts coach Tony Dungy.

But the ad's message also was that interracial sex is normal and legitimate, a fairly radical concept for both the dominant media as well as its audience.

Nevertheless, for decades, interracial couples of different sexes have been sneaked into advertising, movies and television series, and almost certainly not because of popular demand from either race. The Owens-Sheridan match is only the most notorious to date.

In the minds of those who produced the ad, race is at least as important as the moral and aesthetic norms their ad subverts.

To them, the race as well as the religion, the morality, and the culture of the host society are all equally hostile and oppressive forces that need to be discredited, debunked and destroyed.

If the destruction can't happen at the polls or through the courts, they can always use the long march through the culture that control of the mass media allows.

Breaking down the sexual barriers between the races is a major weapon of cultural destruction because it means the dissolution of the cultural boundaries that define breeding and the family and, ultimately, the transmission and survival of the culture itself.

"We apologize," smirked the spokesman for those who sponsored the ad, Mark Mandel, the Vice President of ABC Sports.

Mr. Mandel of course ultimately reports to his own boss, Michael Eisner, chief executive of the Walt Disney Company that owns ABC.

And Mr. Eisner's Disney in recent years has become a battering ram against traditional American identity.

Re-electing President Bush and voting against homosexual marriage are well and good, but they won't defeat the real enemy in the moral, cultural and racial war that the likes of Mr. Mandel and Mr. Eisner are waging.

If American voters really are driven by the "moral issue," they need to drive a good bit further than Mr. Bush and his "family values" allies have suggested.