Dismal, yes, but September's employment numbers were not catastrophic, and some economists choose to see them as a "temporary setback" to the economic recovery that they think is now underway.

Alas, even the U.S. government can't sustain that fantasy. The Bureau of Labor Statistics also announced that it has been underestimating job losses during this recession, and in January would likely lower total employment by about 824,000, or 0.6%, in its annual benchmark revision. Such a revision is about three times the normal revision of 0.2%.

This admission is a blow to the "birth-death model" of job creation which—a la Joseph Schumpeter—views a portion of monthly job losses as a sign of "creative destruction" in the broader economy and, ultimately, a harbinger of future job gains.

Bottom line: employment reality is worse than the headlines.

The MSM is not entirely averse to telling it like it is. Thus many of the September employment stories touched on:

But American worker displacement by immigrants? None of the stories we reviewed delved into it—although VDARE.COM has been writing about displacement for six years.

The federal government fails (as usual) to provide adequate statistics on displacement. So we use the monthly gap between Hispanic and non-Hispanic employment as a proxy, because so many Hispanics are legal and illegal immigrants (the BLS tells us it was 54% in 2008). We get data on Hispanic employment from the "other" employment survey, based on households rather than businesses. From it, we compute the VDARE.COM American Worker Displacement Index (VDAWDI) which we unveiled in 2004. The federal government does provide data on national origin once a year, and this has vindicated our approach.

The Household Survey found total job losses for the month of September to be 785,000—or nearly three-times the headlined figure from the Business Survey. Overall, immigrants (Hispanics) got a disproportionate share of the jobs created in the Bush years—and they have held on to them in this recession, so that immigrant displacement of American workers has not been reversed.

Non-Hispanics bore the entire brunt of the September job collapse—and then some. The Hispanic labor force enjoyed substantially higher employment amidst the general bloodbath.  Here are the September figures:

For some months in 2009, we had been reporting what seemed to be a developing reversal in American worker displacement. But September's job pop should dispel any notion that the long-term trend toward the Hispanicization of the U.S. workforce has been broken. The point is evident in our VDARE.com. American Worker Displacement Index graphic: 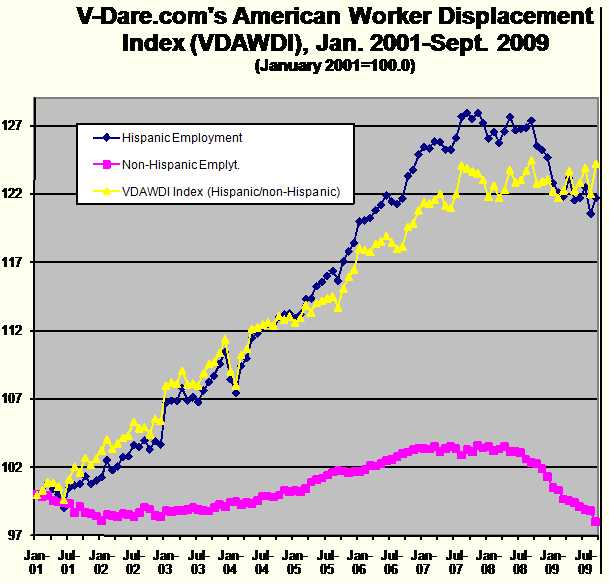 VDAWDI rose to 124.2 in September, its highest reading since last August—and only a smidgen short of its all-time peak, 124.5, reached in September 2008.

Stock market jargon seems relevant. Over the past 12 months American Worker Displacement has experienced record month-to-month volatility. While the long-term trend has not been broken, a bottom is being formed. Come a resumption of economic growth and job creation, new displacement highs are inevitable.

We are bullish on the bad.

What this means is that, if an immigration moratorium had been in effect since 1998, at least 7.424 million fewer foreign-born workers would be competing for American jobs.

How many fewer Americans would be unemployed? We don't know—the feds have made no attempt to estimate American worker displacement. But if every new foreign worker had displaced a native worker—i.e., a one-to-one displacement rate—a  1998 moratorium  would have cut our unemployment rate from the current 9.8% to about 4.5%.

To put it another way, these numbers suggest that even a one-year immigration moratorium instituted today would reduce the unemployment rate by about half a percentage point.

What is Washington waiting for?