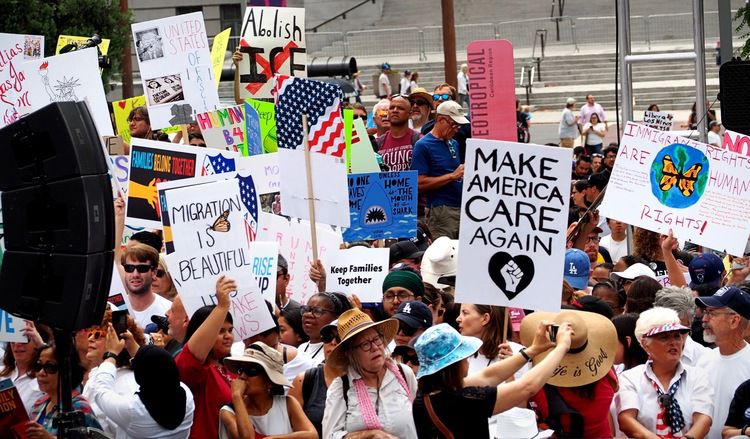 So now, we learn from a fawning Buzzfeed, “young Jews” have founded Never Again Action [Tweet them] to condemn President Trump, call for the elimination of Immigration and Customs Enforcement, and shut down those awful “concentration camps” for “migrants” at the southwest border—part, they claim of a new “Holocaust.” [As The US Debates “Concentration Camps,” These Jews Are Trying To Actually Shut Them Down, by Julia Reinstein, July 20, 2019] As a patriotic America-First Jew who supports Germany and Israel, I have been contemplating this sort of people intermittently for 18 years. Their claim isn’t just untrue. It’s off-the-chain insane—a blood libel on America.

The NAA’s Jews aren’t trying to stop a new Holocaust. They’re trying to start one, here, in the United States, by flooding the country with aliens from the Third World. This time, the victims will be Americans—the Historic American Nation. But what’s often missed: They would do the same to Israel if they could.

The NAA’s Jews, Buzzfeed didn’t report, aren’t so much Jewish as they are communists. That explains why they do what they do, including anti-American protests at which the activists shout “Never Again!” If people had demonstrated against the Nazis the way NAA is demonstrates against the evil racist Trump, they claim, the Holocaust would never have happened.

NAA’s activists have, of course, received the usual litany of laudatory editorials and reportorials in the Main Stream and Jewish media. [Inside the Jewish Effort to Stop ICE and Trump’s ‘Concentration Camps,’ by Danielle Ziri, Haaretz, July 9, 2019; Want To ‘Send Omar Back’? That’s What The Nazis Did, by Batya Ungar-Sargon, Forward, July 18, 2019]

But before getting to the history of NAA’s origins and goals, let’s debunk this “concentration camp” tale. Mainstream Jewish groups rejected as trivializing the Holocaust when Rep. Alexandria Ocasio-Cortez spun it into the latest narrative to justify Open Borders. [These Jews called out AOC over her use of ‘concentration camps.’ Here’s what they think about the detention centers, by Ben Sales, Jewish Telegraphic Agency, July 8, 2019]

Remember, the foreign criminals held in border detention centers broke into our country and seek to steal it. We didn’t break their doors down and seize them in “Nacht und Nebel” (“night and fog”) actions. German and other European Jews, on the other hand, were hard-working citizens and taxpayers who served heroically in World War I. They just wanted to be left alone.

Don’t confuse the NAA Jews with the neoconservative Jews who favor immigration. Yes, those American Zionists hypocritically support Israel’s walls to keep out illegal aliens but demand open borders for America. Yes, they think its fine for Benjamin Netanyahu to call illegal aliens “infiltrators,” but a terrible sin for Donald Trump to call them “invaders.”

But, unlike the neocons, the NAA’s Jews cannot be accused of hypocrisy--they wish to destroy Israel and America. For that matter, they’d destroy the rest of the West, too.

Now, a little history of the NAA and its precursors.

In America, they supported the so-called Civil Rights movement. And they joined not just the “peace movement” during the war in Vietnam but became “war resisters” and joined the terrorist Weather Underground, a top leader of which was the Jewish Bernadine Dohrn. Now, that same crowd, two generations later, supports Open Borders and “immigrant rights,” along with the “Right to Resist” for black criminals; i.e., the “right” to wantonly commit crimes and then murder cops who try to stop them. They still hope to implement Leon Trotsky’s plans in 1939 to sow rebellion among blacks in the West, including, of course, the U.S.

And they’ll silence anyone who opposes them. In 2008, when Jewish communists who supported Obama demanded the right of return to Israel for Arabs, a Jewish socialist friend of mine who supports borders in America and Israel alike criticized them in his popular blog. The Reds terrorized him, tried to destroy him professionally, and forced him to permanently shut down his website.

Now, in conscripting the Holocaust into the war against immigration law, NAA is doing likewise. Those who oppose them are, by implication, Nazis.

In Israel, for more than a generation, NAA’s ideological forebears have demanded a “one-state solution.” That means Jews and so-called Palestinians would live together under one government, including a “right of return” for Arabs who assert that their ancestors resided on the land of present-day Israel before 1948. Of course, Arabs would swamp the Jews, and bring about that democratic ideal they and the communists want: one man, one vote, one time. Then Holocaust II will begin in earnest.

My earliest encounters with such “Jews” was in 2002. Brooklyn-born Adam Shapiro, who was living in the “Palestinian” territories with his Arab “Christian” fiancé, Huwaida Arraf, disguised himself as a medic in a Red Crescent ambulance and surreptitiously entered the besieged Ramallah bunker of PLO terrorist Yasser Arafat. Seeing as Shapiro was in a terrorist front vehicle, he probably didn’t fool the Israeli Defense Force, but they let him pass anyway.

Afterward, Shapiro and Arraf feverishly worked the phones back to New York, depicting himself as having been “trapped” in the terrorist’s compound.

He claimed to be a Jew who renounced Judaism, a simple pacifist and humanitarian, but I proved that he supported wanton Arab terror as long as the victims were Jews. [A Jewish Nazi? The Adam Shapiro Story, by Nicholas Stix, Toogood Reports, April 13, 2002]

Point is, NAA wants to do to America what Shapiro tried to do to Israel. Thus they are joined by today’s most influential Jewish Leftist organizations: Jewish Voice for Peace, founded in 1996, and BDS (“Boycotts, Divestment, Sanctions”), founded in 2001.

Those outfits have created a peculiar anti-Jewish political “theology,” as Joshua Muravchik wrote in the neocon flagship, Commentary:

Palestinian activist Linda Sarsour…used the platform provided by JVP to offer instruction on the meaning of Judaism. She opined that “being pro-Palestinian ... is foundational to Judaism’ because ‘wanting freedom and justice for Palestinians … reflects the teachings of Judaism, which focuses on uplifting the oppressed. ...”

In 2017, JVP circulated a list of four groups of victims whose names were to be read aloud [in observance of Yom Kippur, the holiest day of the year for Jews]: black men and women killed by police ... people killed in the 2016 bombing of the Istanbul airport ... people killed while dancing at Pulse nightclub ... trans women of color murdered in 2015/16.

For Passover, JVP has published its own Haggadah, the guide to the seder held in Jewish homes. It begins with a dedication to “intersectionality,” exhorting participants to “find moments of fierce righteous rage that motivate you to re-commit to local and national organizing.”

[Not so Jewish, Not for Peace: How Jewish Voice for Peace Falsifies Judaism and Glorifies Terrorism. A Deep Dive, by Joshua Muravchik, March 2019]

Note, however, that JVP and BDS, while in effect anti-Semitic like NAA, insist that they are motivated by Jewish teaching. To them, Judaism is a suicide pact, as is the U.S. Constitution. Evan Feldberg-Bannatyne, 21, a student at Earlham College in Indiana and NAA’s chief fundraiser, explained it for Buzzfeed’s Reinstein: “This is really how I practice my Judaism — through social justice.”

That teaching just happens to coincide with the aims of the three top supporters of BDS in the House of Representatives, all of whom voted against the recent resolution condemning the BDS movement: Muslims Rashida Tlaib of Michigan and Ilhan Omar of Minnesota, and, of course, New York’s Ocasio-Cortez, also widely known as Occasional-Cortex [Here Are The 17 Members Of Congress Who Voted Against Condemning BDS, by Aiden Pink, Forward, July 24, 2019]

Anyway, whenever you hear a Jew invoke “social justice,” you know that his real religion is Marxism. Just as JVP and BDS would flood Israel with Arabs to kill off that country’s Jews, the same people and their racial socialist allies would flood America with Third Worlders to kill off the Historic American Nation.

And we can’t, despite what NAA would have you believe about Trump’s “concentration camps,” depend on Republicans to stop it. An analogy from history: In 1954, it was a Republican senator from Vermont, Ralph Flanders, who introduced the resolution to censure American patriot Joe McCarthy and stop his tenacious fight against domestic communism and Reds in government.

Similarly, today’s neocons, having pushed all rivals out of the Conservative Movement, have eliminated all those actually willing to fight the Jewish communists aiming to destroy America. Republicans aren’t likely to buck them—any more than California’s GOP were able to resist immigration even after the clarion call of Proposition 187.

There is no gentle way of dealing with these people. They are bereft of decency and immune to reason. As the late novelist Mary McCarthy might quip, every word they say is a lie, including “and” and “the.”

That includes, of course, the false claims of “concentration camps” that they’re using to push for open borders under the guise of a fight against Hitler.

But that isn’t who they’re fighting. They’re fighting us. It’s anti-Jews vs. Jews, and, for the Historic American Nation, anti-Americans vs. Americans.

Netanyahu And ImmigrationIsrael and immigration
<< Previous
Next >>
LATEST