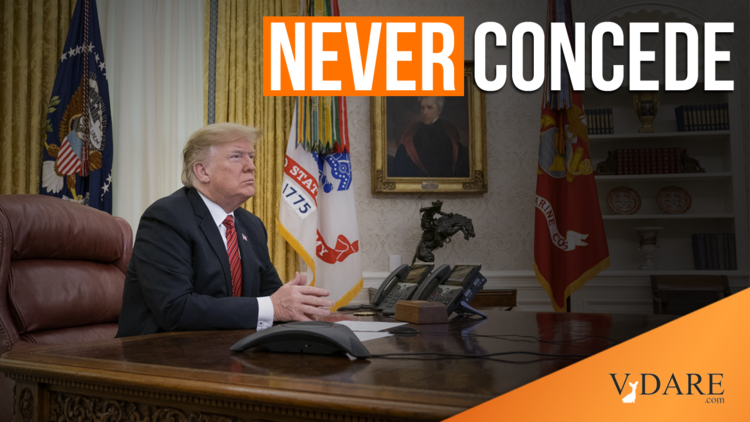 No Surrender! President Trump Should Not Concede—No Matter What

Earlier, by Michelle Malkin: No Time For Phony Healing

The Dem/ Main Stream Media Complex is infuriated that President Donald J. Trump will not concede the 2020 election. This is a Sign of Contradiction that he is doing the right thing. This does not yet mean that Trump won enough votes in key states, as Tucker Carlson has noted, but we also can’t say with confidence that Trump lost [Tucker Carlson Says There’s Not Enough Fraud to Change Election Results, by Jacob Jarvis, Newsweek, November 10, 2020]. And here appears to be solid evidence that there was at least some wrongdoing—far more so than for the Russia Hoax that paralyzed Trump’s Administration for three years. The same neoconservatives who are demanding Trump concede would be insisting the U.S. invade another country to “bring democracy” if we saw its government behaving this way. Ultimately, the entire battle is about who is sovereign in this country—American citizens or the Dem/ MSM complex, including Big Tech oligarchs. They ensured it was not a “free and fair” election, and President Trump should never concede.

Let’s consider the almost hysterical fury from the MSM telling us that President Trump has a duty to admit defeat because Biden “won.”

And there are countless others.

In fact, of course President Trump isn’t doing anything illegal. No one has won or lost. Senate Mitch McConnell may be afraid to defy Trump because he doesn’t want to lose the two Senate seats in Georgia and thus, his status as Majority Leader. But he’s absolutely right when he says that the Electoral College determines the winner and, until that happens, “anyone who is running for office can exhaust concerns” [Mitch McConnell says Electoral College will determine 2020 election, by Lisa Mascaro, Fox6 Milwaukee, November 10, 2020]. The Supreme Court case Bush v. Gore that settled the 2000 election didn’t come to an end until December 12, 2000. Media outlets “declaring” the winner have no legal significance, especially when their projections seem to be based on polls that have proven to be inaccurate [Professional pollsters blew it again in 2020. Why?,by Matthew Rozsa, Salon, November 4, 2020].

President Trump has a strong legal case in the key state of Pennsylvania, where it appears that the state Supreme Court simply created a new power to count votes that arrived after election day. The U.S. Supreme Court (without Amy Coney Barrett) deadlocked over this, but the Trump campaign will almost certainly take this case to SCOTUS again [Byron York’s Daily Memo: The election lawsuit Trump should win, by Byron York, Washington Examiner, November 10, 2020]. As Senator Ted Cruz has said, there has thus far not been a “comprehensive presentation of evidence” [Ted Cruz: Trump Election Fraud Allegations Will Be Resolved In Court, Not By Persuading You Or Me, by Tim Hains, RealClearPolitics, November 10, 2020]. Republican leaders in Pennsylvania have already called for a recount “in any counties where state law was broken” [Senate Co-Sponsorship Memoranda, Pennsylvania State Senate, November 6, 2020].

However, there are more fundamental issues at stake. Thanks to the Dem/ MSM complex’s campaign of COVID-19 hysteria, the country engaged in a massive experiment with mail-in voting [Are We Sure About All Those Mail-in Ballots, by Josh Hammer, The American Mind, November 10, 2020]. Different state requirements add to the confusion. There have been specific claims of outright fraud, notably the inclusion of dead people on the voter rolls, reports that local officials gave voters instructions that would invalidate their ballots, and open theft of ballots [On Electoral Fraud in 2020, by Pedro Gonzalez, American Greatness, November 9, 2020]. Critically, in several of the states where President Trump is launching legal challenges, the common factor is a company called Dominion Voting Systems.

The truth or falsity of these claims must be shown in court. Of course, anti-Trump groups are trying to prevent any legal challenges by individually targeting the law firm that President Trump is using [Inside the Lincoln Project’s new campaign targeting Trump’s law firm, by Greg Sargent, Washington Post, November 10, 2020]. No one seems to have considered that such a strategy ensures that most Trump supporters will—correctly—consider a Biden Administration utterly illegitimate.

Twitter and other social networking oligopolists are currently putting their thumb on the scale by censoring posts or by claiming there are “election integrity” issues with posts they dislike, even posts by President Trump himself [Tucker Carlson: Big Tech Took Part in ‘One of the Worst Forms of Election Tampering,' by Mary Chastain, Legal Insurrection, November 10, 2020].

This control of information both before and after the election renders democracy pointless. If Tech oligarchs can control what the voters see and hear, we might as well put them in charge and dispense with Election Day altogether. It would be simpler and less time consuming than going through a farce where both the exchange of information before an election and tabulating of votes on Election Day itself are apparently too much for the world’s sole superpower.

If this is the way the system works, then, as President Trump has been claiming for years, it is “rigged” and illegitimate. If this is how it is going to be, whatever the Regime on the Potomac says in future should be considered as foreign to the Historic American Nation as governments based out of Brussels, Moscow, or Beijing.

Indeed, one can’t help but wonder whether the historic American nation would fare better under outright foreign occupation than a hostile elite which considers itself our rulers and treats us with open contempt, if not hatred.

President-elect Joe Biden has already won the election. Even if President Trump was able to overtake Biden in Arizona or Georgia, or both, and hold onto North Carolina and Alaska, where he’s leading, that fact would not change. https://t.co/WrqUjeMQr0

President Trump and outraged Republicans do have a card to play even if all the legal challenges fail. State legislatures must certify a state’s electors before the College can vote for the next president. If state delegations believe the vote has been corrupted, they can send their own competing slate of electors [Donald Trump’s Stealthy Road to Victory, by Graham Allison, National Interest, November 6, 2020].

President Trump also has powers that he can use to change the political environment, especially by destroying hostile institutions and declassifying documents that the Deep State really doesn’t want to be made public [Reflections on the late election, by Curtis Yarvin, Gray Mirror, November 8, 2020].

If a rigged system is going to take President Trump down, he can take it down with him.

Arguably, if President Trump had the will to do something like that, he would not be in this mess. He did not bring Big Tech to heel. He did not ensure that the bureaucracy was filled with people loyal to him. He kept hiring people who were his enemies and then acted surprised when he was rewarded with treachery. He governed like a conventional Republican while talking like a nationalist, the worst of both worlds [The Tragedy of Trump, by Gregory Hood, American Renaissance, November 16, 2018].

Nonetheless, with his back to the wall, Trump can and should fight. Even now, he has a popular movement behind him—all he needs to do is lead them against the System that they thought they had defeated in 2016.